Preview: The Adventures of Tintin: The Game Hands-On Preview: The Adventures of Tintin: The Game Hands-On

Platformers are coming strong this holiday season with some heavy-hitting titles coming for just about every platform. Mario and Rayman alone should be enough to get platforming fans excited, but we can’t forget about the little guys like The Adventures of Tintin: The Game. Sure, it doesn’t have the title that screams great platforming and it might have that negative stigma of being a game based on a movie, but you might find yourself pleasantly surprised.

The Adventures of Tintin can be played in both single-player or with a friend in co-op. While playing solo, the platforming is like any ordinary platformer where you jump, duck, climb and have the occasional enemy to defeat. Nothing too spectacular here, but the important thing is that it all felt really solid. The controls were responsive, and that sense of getting a feel for the physics of the game was almost instant. The graphics were also nice to look at and punching out enemies is always fun. 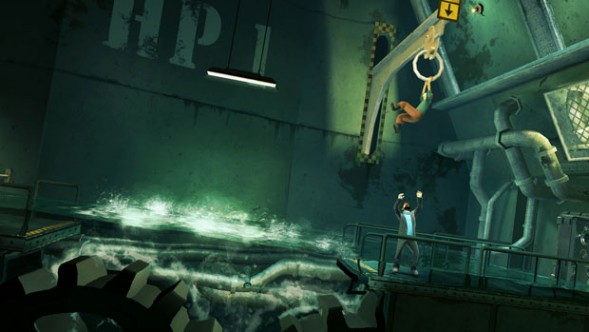 The co-op portions of the game is the same deal, except that it had (you guessed it) co-op specific obstacles to overcome. There are parts where you need to boost a partner over. There are also parts where one needs to hit something in order for their partner to go on to the next part of the stage. This all while still jumping, climbing and pounding on enemies. It sounds basic and not very exciting, but it actually was a whole lot of fun. Sometimes you just need to go back to the basics and not go overboard trying to be unique and different.

There was also a stage where you pilot a plane while maneuvering through a cave. You shoot your way through rocks, speed boost through areas, and, from what I saw, it’s all on-rails. It’d be great if there were some dogfighting included in the final version of the game, but we’ll have to wait until December to see that.

Overall, there isn’t much groundbreaking about The Adventures of Tintin: The Game, but sometimes you don’t need that to be a good game. I found this title to be enjoyable and, as a platforming fan, the great controls and visual make this game an experience that will be worth your while.