Looks like the new Driveclub video just released had a secret Easter egg hidden in it. Game Director Paul Rustchynsky teased it on Twitter.

You saw the Chevrolet Corvette ZR1 Centennial Edition in the first JPN video, the Enzo Ferrari in the 2nd but what was the third new car?

While Rustchynsky did not confirm or deny the model, there’s no need: the car is clearly identifiable as the Jaguar C-X75, a hybrid concept car introduced at the 2010 Paris Motor Show (it was first recognized by Twitter user Kash).

Its unmistakable rear is clearly visible in the video as the Enzo Ferrari passes it. 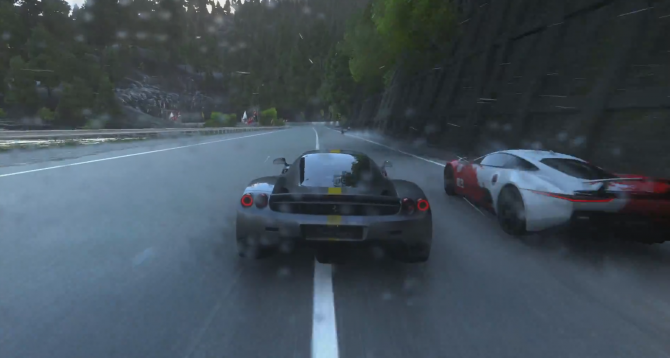 Here’s how Jaguar itself presents it:

The C-X75 has a combined power output in excess of 850bhp and 1000Nm of torque, thanks to its state-of-the-art, Formula 1-inspired, 1.6-litre dual-boosted (turbocharged and supercharged) four-cylinder powerplant which generates 502 bhp at 10,000 rpm.

It is allied to the highest torque and power density electric motors in production, which generate a further 390 horsepower. The battery pack in the C-X75 is the highest continuously rated power PHEV pack in the world, capable of delivering more than 300kW over the full state of the charge window.

The C-X75 can sprint from 0-100mph in less than six seconds, thanks to its advanced 7-speed automated manual transmission that allows gearshifts in under 200 milliseconds. The very first C-X75 prototype exceeded 200mph in testing with ease, and the car has a theoretical maximum velocity of 220mph.

The car’s deployable aerofoil and underfloor aerodynamics create more than 200kg of downforce at 200mph, and active systems enhance its high-speed stability.

Unfortunately the car never entered full production due to the economic climate, but it’s still a lovely beast, as you can see in the pictures below, courtesy of Jaguar: