The Nintendo Switch version of PAYDAY 2 was slyly announced back in April 2017 during a Nintendo Direct, and at the time we only had a release window of Winter 2017. Well, that’s all changed, as developer Overkill Studios and publisher 505 Games have announced that the game is set to hit store shelves and the e-Shop on February 27, 2018, in North and South America, while players in Europe and Australia will be able to get their hands on the title on February 23, 2018.

In addition to the announcement of the release date, the game’s box art on Nintendo Switch was also revealed, which is very different from the game’s other counterparts. You can, as always, check out the image at the end of the article.

In other PAYDAY 2 news, about three weeks ago an h3h3 character pack for the game was announced, which features Ethan and Heila Klein from the popular YouTube channel. As of the time of this writing, it’s unknown whether or not the h3h3 Character Pack will be available on the Switch version of the game.

An h3h3 Character Pack Is Now Available in Payday 2

PAYDAY 2 was originally released on August 13, 2013, and is also available on PlayStation 4, PlayStation 3, Xbox One, Xbox 360, Linux, and Windows PC. 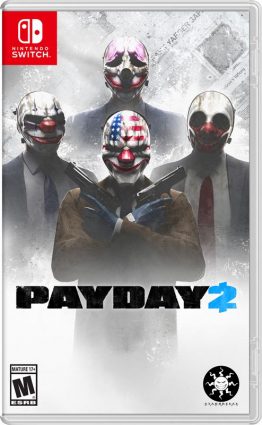 The CEO of Starbreeze has announced PAYDAY 2: Legacy Collection along with the announcement that the game is back in active development. Check Out the Payday 2 The Diamond Heist Trailer; New Character Clover Being Added Payday 2 Is Now Available on Nintendo Switch, Check Out the Launch Trailer