As someone who, for the most part, stays far away from horror related media, the Alien franchise has always been the one property that has been capable of sucking me into its frightening stories of space, evil corporations and chest-bursting creatures. Alien: Isolation is Creative Assembly’s attempt to craft a playable version of Ridley Scott’s nightmare inducing classic that delivers some scares but stumbles in its execution.

Taking place 15 years after the events of Alien, players are put in the role of engineer Amanda Ripley, the daughter of Sigourney Weaver’s iconic Ellen Ripley character. Seeking closure to her mother’s mysterious disappearance, she agrees to travel with a small crew of Weyland-Yutani company members to reclaim the recovered flight recorder of the Nostromo that is aboard Sevastopol Station — a freeport and commercial outpost in the process of being decommissioned by the Seegson Corporation.

Upon your arrival, of course, things aren’t exactly rainbows and sunshine. Sevastopol appears to be in rough shape with communications down and unable to dock your shuttle. Donning spacesuits, you attempt to spacewalk to the station with your small party, only to be separated by debris, just barely pulling yourself in through an airlock to apparent safety. 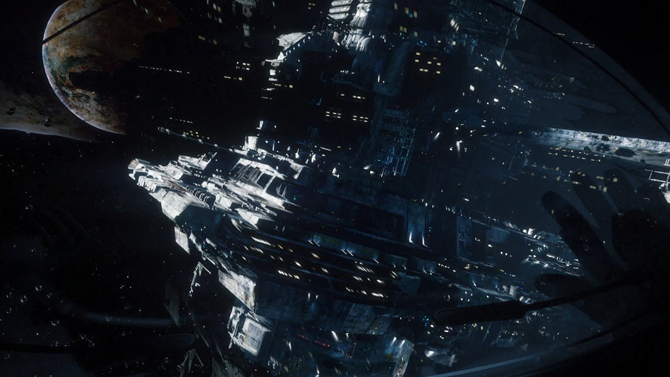 The tagline for the original 1979 Alien film is “in space no one can you hear you scream,” referring to the Nostromo starfreighter’s crew struggling with a perfect killing machine in complete isolation. Creative Assembly has ramped up the setting’s scale while retaining the core concept of seclusion in the form of Sevastopol Station.

You find that society has broken down and the station has become part ghost town and part wild west, with scavengers traveling in small parties to find what supplies they can and shooting anyone who gets too close. The whole facility is on lockdown and the transits aren’t working, creating a cramped and claustrophobic vibe that makes it feel less like a giant playground to run through and more like a massive segmented death trap.

The claustrophobic environment is accentuated by the remarkable work done in replicating Ron Cobb’s design style that is heavily utilized in the original film. The industrial design, while a little silly looking in today’s era of smartphones and tablets, was applauded for its logical and plausible design in the 70s and early 80s. There are beige computers with green hard pixel edged text scrawling across their screens, safety signs for emergency locks on doors and more that all relate back to Cobb’s work on making an futuristic extension of the technology of the movies time.

An eerie soundtrack composed by Jeff van Dyck — inspired by the late Jerry Goldsmith’s work — and the sound design that Mark Angus oversaw really punches the amazing aesthetic design home. Authentic sounds from the original movie like buzzing alarms, analogue chirps and the beeping of the iconic motion sensor all contribute to making Alien: Isolation’s dark and brooding setting the most convincing video game depiction of an established IP that I have ever seen. The artists and sound designers at Creative Assembly should give themselves a hearty pat on the back for truly nailing it. 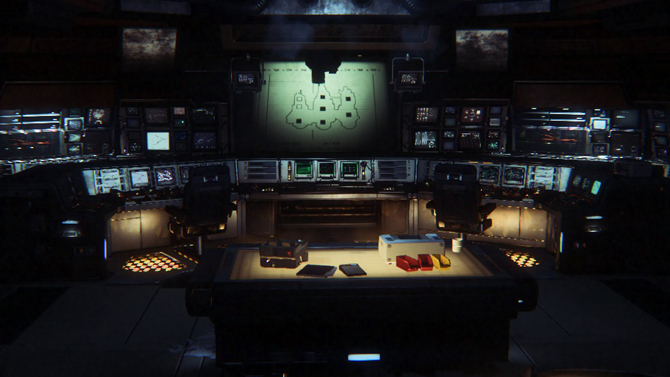 The suspense Creative Assembly builds early in the game through establishing the setting creates the perfect introduction to a horror game. For nearly the first three hours that I played Alien: Isolation, I did not see the titular creature at all, but rather heard rumbles in the stations hull and the drifting shadows in the sparks of severed electrical cords. It ingrains a sense that something is there, stalking you in the dark, making every little step you make come with a sense of paranoia to what you might encounter around every corner.

Unfortunately, the superb detail in the environment and the building tension leads to a very mixed payoff. When you actually encounter the Xenomorph for the first time, it is truly terrifying. The beast can be heard moving through the ducts above your head and the vents below your feet. When it clambers out of hiding to stalk you in the halls of Sevastopol, the thumping of its steps, the bone-chilling hisses it makes as it tries to sniff you out and the slithering noise of its tail dragging along the steel floors are all enough to raise your blood, that is, so long as you stay immersed in the moment of the game. 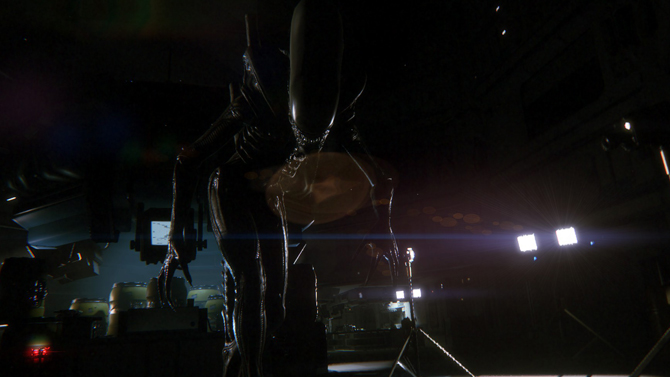 What breaks the immersion is the nature of how the beast ends up interacting with you throughout the games 20 plus hour story. While it’s unscripted AI is slightly unpredictable and makes it appear to have a sense of intelligence while mercilessly hunting you down like a lion stalking a lone gazelle, Alien: Isolation becomes more of a frustrating example of trial and error than anything else. The Xenomorph on medium and hard difficulties is unforgiving and will kill you more often than not, with its horrible screams letting you know that you’re screwed.

There is almost no wiggle room in this regard; you can’t outrun it and if it sees you hide it will merely come and rip you out from under the table you just ducked under or pull off the door of the locker you jammed yourself in. After a few hours, the idea of being in a game of cat and mouse wears thin with repeatedly being murdered, and the Xenomorph moves from being a big, bad boogeyman to an annoying obstacle that merely hinders your progress between the games sparse save points while arbitrarily flicking some switches along the way.

The game tries to help you in this regard by providing a crafting system from collecting pieces of salvage throughout the station to create makeshift items to assist you. Flashbangs, smoke bombs and even a few weapons can be found, but very little of these items are truly helpful or empower you in any way. If the Xenomorph spots you, shooting it with your revolver is futile as the monster is unkillable and using it on any other humans or rogue androids you might encounter will more than likely just alert the beast to your position than anything else.

Only three items I found useful in my experience: The motion sensor, the noise maker and the flamethrower. The motion sensor will be your go-to item for the entirety of the game, letting you know when you are close to the creature and when to get out of dodge. The noise maker has its niche uses to get the beast out of hiding to let you move, but I maybe used it two to three times in the entirety of my playthrough.

The flamethrower, by far, is the most game breaking item. Spraying the beast with a flame will cause it to run away to the nearest vent before coming back to investigate after several seconds. It takes away any need for stealth as you can book it through the levels and just spray the Xenomorph when it emerges to get it to leave you alone. Thankfully, it is only available late into the game and is not an item you will have for most of the experience. 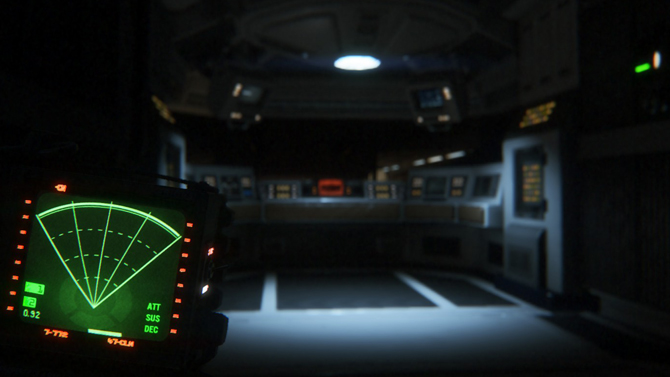 After being stuck in this rut of being unable to progress for several hours from being constantly shredded apart by the ruthless monster, I brought the difficulty down to easy and found the game to be a much more bearable experience. It is the difficulty I would suggest for playing through the game your first time before challenging yourself on a higher difficulty. I found it easier to immerse myself in the game’s incredible world as a fan of the franchise. Little bits can be found around Sevastopol like ID tags and audio logs that build the background of the story, but will not be particularly enticing to seek out for those just looking for a great horror game.

The story, while providing plenty of fan service that I won’t spoil for you, is unfortunately rather derivative as a whole. It doesn’t explore any new thematic territory and its flat characters leave little to care about. The most intimate relationship it builds is between you and the Xenomorph, and even then for an extended period in the last third of the game it will be completely out of the picture to have you deal with an android threat that I cared little to play and made what I felt would have been a suitable ending drag the game on far longer than I desired.

As a whole product, Alien: Isolation is the best Alien experience you will have in a video game. While trying to replicate the experience Ridley Scott created more than 30 years ago, Creative Assembly accidentally committed the mistake that critics constantly point to when analyzing Scott’s films: it’s almost all style over substance. As an artistic work it is nearly a masterpiece, while it falls flat in delivering consistent scares that horror game enthusiasts expect or a thought provoking story.

If you are an Alien fan like me and find yourself immersed throughout most of the game, you will surely find a lot to love, but for others coming for a new game experience they will find a game that mainly forces you to move slowly from point to point with little reward. A new documentary from Noclip looks back at the making of Alien: Isolation, and how the developers took big risks to bring it to life.

Alien Isolation Art and Behind The Scenes Images Discovered Alien: Blackout Finally Revealed for Mobile, It Isn’t a Sequel to Isolation