Review: Atelier Shallie: Alchemists of the Dusk Sea – A Step Forward For the Series Review: Atelier Shallie: Alchemists of the Dusk Sea – A Step Forward For the Series

The latest title in the long-running Atelier series of JRPGs is the PS3 exclusive Atelier Shallie: Alchemists of the Dusk Sea.

The title does away with a component that has long been a staple of the series to great effect, as well as polishes what were already good ideas to forge a surprisingly solid and pleasant experience.

In Atelier Shallie, all the natural water sources of the world have nearly dwindled away, creating a dire situation. The long stretch of harrowing desert that has emerged from where there was once a large body of water has become known as the Dusk Sea.

The Dusk Sea is relentless, spawning beasts that slay those who have found themselves in the Sea’s trenches, if only in hopes of finding the precious resource of water.

The player is tasked with getting to the bottom of the Dusk Sea, the water crisis and finding a solution to both issues.

We get to choose from two playable heroines, both named Shallie and both fledgling alchemists: a spunky, short-haired local and a more traditional, soft-spoken ditz journeying from a distant village.

The character you choose alters your perspective on different events, but the general story remains unchanged overall. 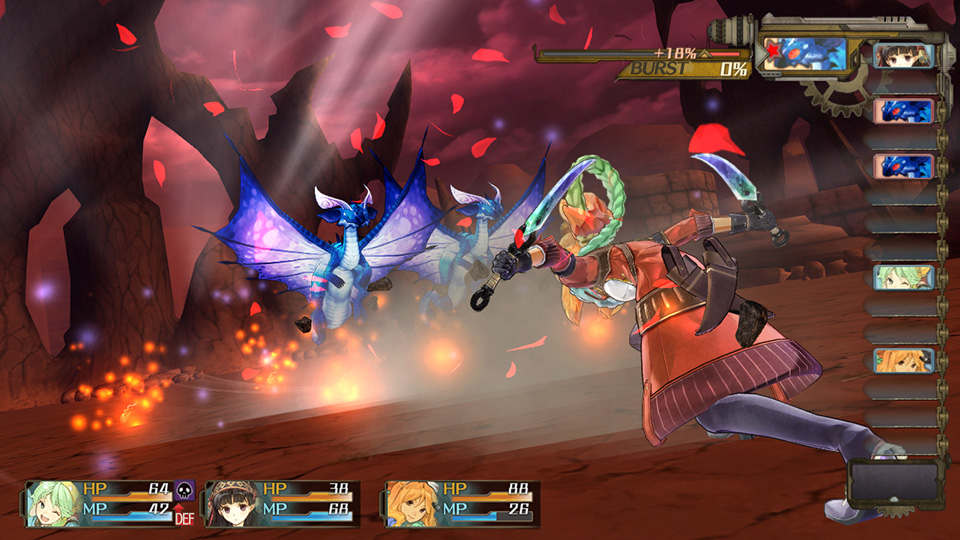 The game sports the familiar lovely anime art style of the last few games in the series. The character design is nicely varied and there are appreciated cameos from other characters in the series.

The soundtrack is also quite enjoyable. I was a big fan of the lighter tracks with lots of flute, such as the tutorial theme for example. Music was a big contributor to the overall bright, upbeat feeling of Shallie, along with the music and characters.

In terms of voice acting, the English cast is just okay. Shallistera sounds permanently bored and monotonic while there’s one non-human character that sounds simply grating, but otherwise I wasn’t bothered too much by the acting.

The game leans on the gameplay foundations of the series but trims some fat to make things much cleaner.

As an alchemist you will of course be able to gather ingredients from the various locations and combine them to make useful items. This time, however, you can give items certain properties by using ingredients that satisfy different criteria to concoct them.

For example, you can inject a property that increases the potency of healing items into a certain grain and then use than grain to create an especially useful healing bread.

You’ll also be concerned with transferring offensive properties into the destructive items needed for combat. This is all on top of the properties that you can imbue into every ingredient based on their type.

Yet there is still the freedom of using any ingredient from within a category rather than a specific ingredient in the creation of most consumables, which is still much appreciated. There is so much depth in the game that you’ll still being seeing tutorials eight hours in. 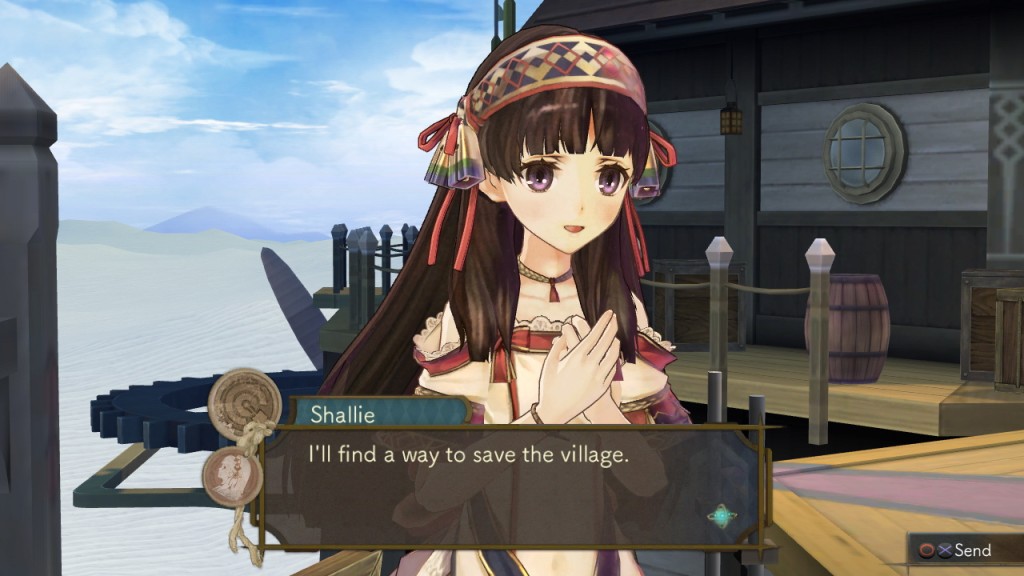 The way search equipment works has been changed for the better. Now each item you add to your bag takes up a certain number of blocks on a grid that gets larger as the game progresses. When you’ve used all of your items up while exploring, their uses will be replenished automatically when you get back to the rest area.

This means that you’ll find yourself toiling away at the cauldron less often and usually have interesting new recipes to try when you do have to cook. The only reason one would create the same item more than once is to create a better item using better ingredients and properties.

I found Atelier Ayesha Plus way too tame on the normal difficulty setting, so I went into Atelier Shallie on the stock hard mode. This manifested as every enemy down to the weakest carrying huge pools of HP and dealing a good clip more damage than what I presumed was normal. Maybe not the most interesting way to add difficulty but I suppose it worked to an extent.

My biggest complaints about the previous Atelier Ayesha Plus were that progressing in the game was far too needlessly vague and that the time limit added absolutely nothing but subtracted everything when it ended my first playthrough. I was thrilled to see that both of these fairly symbiotic issues have been alleviated in Atelier Shallie. 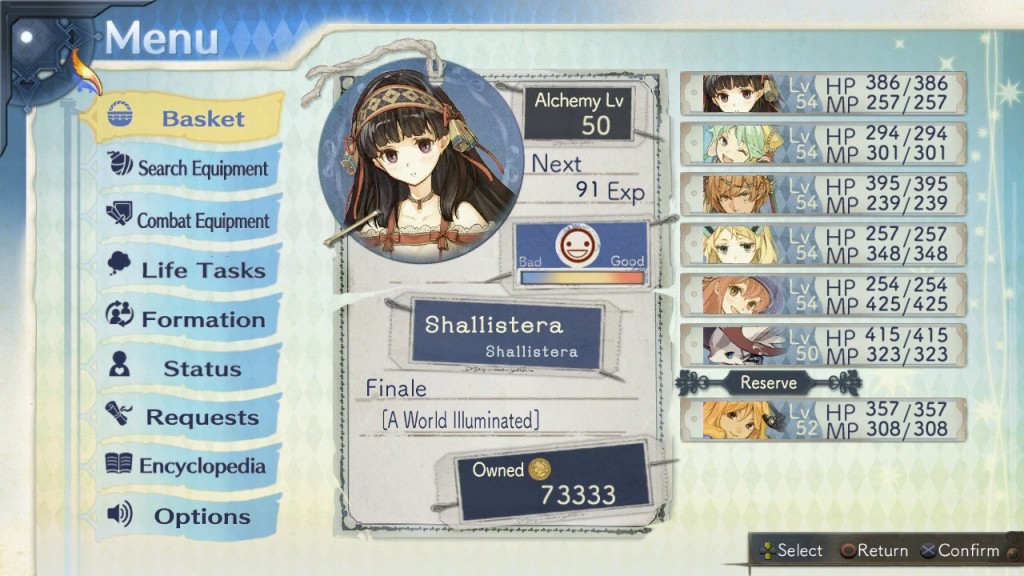 The entire time system of days, months and years appears to have vanished. The game goes a long way to combat confusion with the life task system. The player is given clear, specific objectives and as you complete them more are unlocked.

This makes the title much more fun to play, as you can progress at will without ever being stumped as to where to go or what to do next. I imagine that some fans will prefer the vagueness of the previous games, but I see this as a wonderful improvement.

You can take numerous hunting and gathering quests from a faction and complete them for money. The quests get gradually more difficult and rewarding but will keep you stocked with lots of money, which you can then use to buy recipe books and higher quality ingredients.

Exploring the different environments is still straightforward and simple, but things get a fresh twist with the new events system.

As you battle enemies, gather ingredients and complete the map, you’ll gradually fill an event meter at the top of the screen. When it’s full you can choose to initiate various events like summoning a tough enemy horde or discovering a new ingredient. 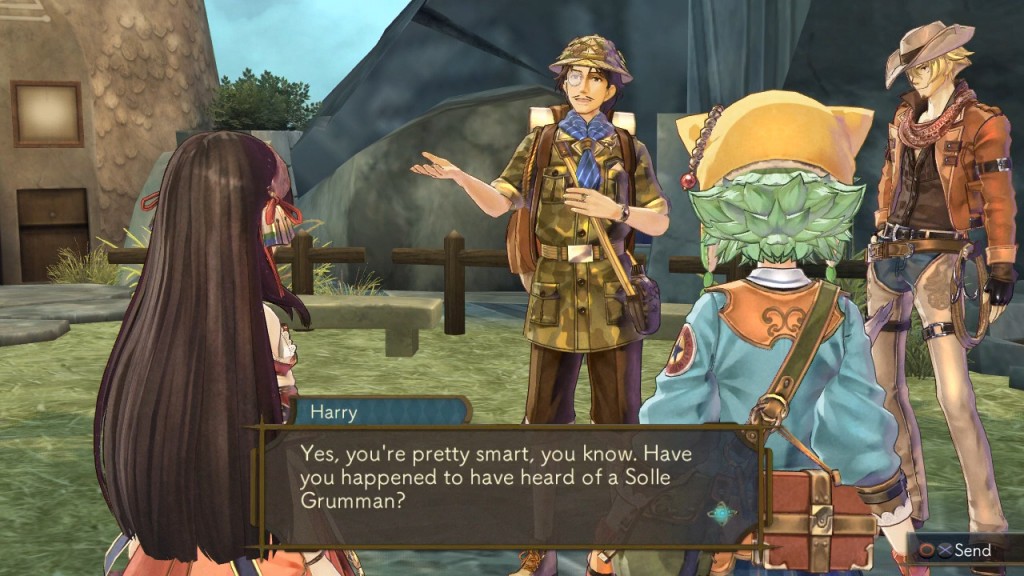 The turn-based combat returns as solid as ever and now players can dish out damage in hopes of sending their foe into a break state to lower their defenses and initiating a burst, greatly increasing the party’s offensive output. During bursts you can deal devastating amounts of damage to your enemies.

As good as it is Atelier Shallie still makes some missteps here and there. The pacing feels wonky because there are so few boss fights and the player is at times asked to choose whether or not to progress to the next chapter in the game. This feels like artificial choice; if you’ve played to a certain point and completed whichever objectives you should be taken to the next chapter.

Another issue is spending too much time backtracking over the same areas for too long to complete objectives, which makes the environments feel a bit cramped and all too similar.

Boss fights are also few and far between, making too much of the combat between them feel insignificant. Basically, I could see this formula being improved on even more.

What’s more, while it is a lovely and competent game, it doesn’t do anything all that different or special in a space that has gotten extremely crowded for this sort of genre.

Not being some mind-blowing triumph in the genre doesn’t take away from Atelier Shallie, but I wonder if Gust couldn’t take these games a bit further in terms of innovation. 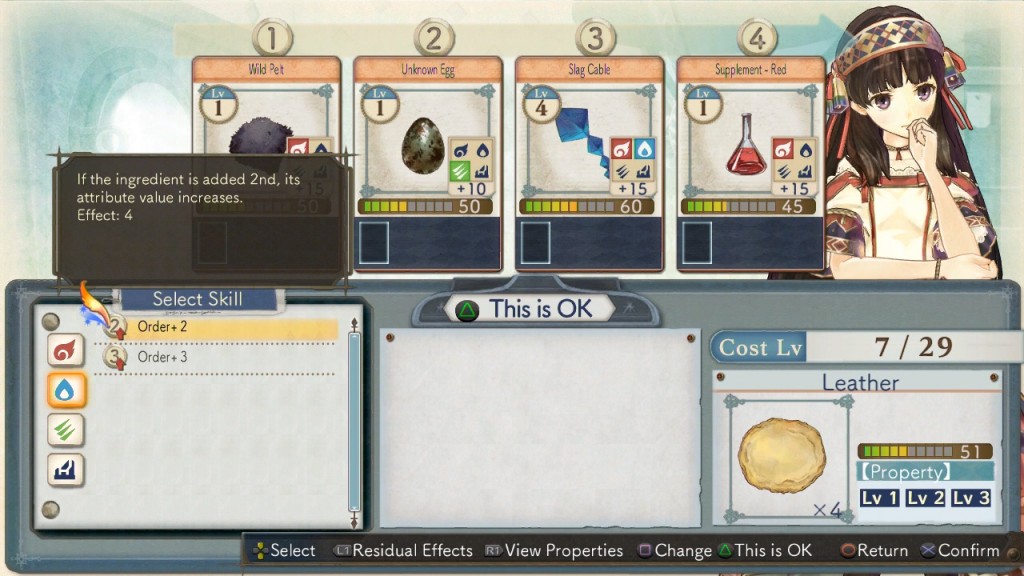 Atelier Shallie: The Alchemists of the Dusk Sea improves in many ways over Atelier Ayesha Plus. The terribly implemented timer is gone and you’re no longer doomed to spend precious time running around aimlessly. You know exactly where to go, what to do and why.

The strong exploring, gathering, crafting and combat return in fine form with new features and the likable group of anime characters is highlighted by pretty visuals, a delightful soundtrack and a rather interesting story.

I imagine that this would be a great choice for anyone’s first game in the franchise, and it certainly should not be skipped by genre or series fans alike. Atelier Shallie Returns with a Plus Entry on the Vita, but Is It Worth Returning To? Atelier Shallie Gets a New Batch of Screens Atelier Ayesha Plus: The Alchemist of Dusk and Atelier Shallie: Alchemists of the Dusk Sea Receive Western Release Dates