I’ve been a fan of the Dirt series since they still had Colin McRae’s name at the front of their title and have enjoyed every main entry in the series to date. Each title expanded on the modes offered in the previous adding a larger variety of stuff for you to do in your car. This culminated in the addition of Gymkhana in Dirt 3 which while fun wasn’t too fondly received by a lot of fans. Thankfully these events were a small distraction in the generous wealth of events available in the game.

Let me be clear up front: if you’re looking for rally racing of any kind, Dirt Showdown is not the sequel you’re looking for. Instead the game focuses almost entirely on closed course asphalt racing and Gymkhana type events while also introducing and putting most of the focus on various forms of a demolition derby. While a game focusing on the parts of Dirt 3 that I didn’t enjoy isn’t the ideal sequel for me, Dirt Showdown still puts forth an entertaining experience. 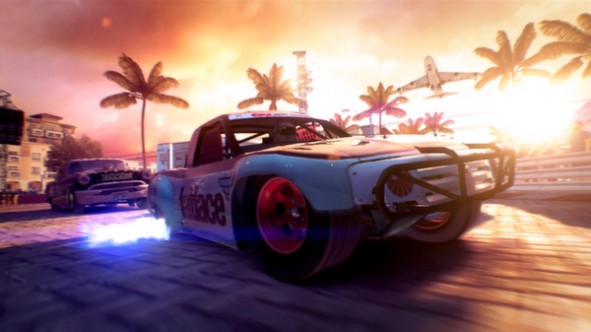 From a presentation standpoint you would be forgiven for mistaking Dirt Showdown for Dirt 3 as the game shares almost every aspect of its interface and appearance with its predecessor. Though the options are different every part of the menus looks almost identical to the last entry in the series which while a little off-putting isn’t too big a deal. Though featuring an excessive amount of animations the interface was clean and easy to navigate. In fact it feels like moving between menus is a bit faster so even the largest complaint in that regard has been improved.

The game features a selection of offerings that should be familiar if you’ve either played the last game in the series or any recent racing game for that matter. The star of the show is of course the Tour mode which returns again nearly identical to the last Dirt game in nearly every regard. There are a few different tiers of levels to choose from which unlock in order and each one contains a number of different events for you to race in.

Unlocking new events is done by getting a certain number of medals in the others which while restrictive at first in the number available does offer some choice down the line, allowing you to pick and choose which ones you want to complete. If you’re not a fan of a particular mode you may be able to complete other races and still unlock enough medals to get access to the next one. 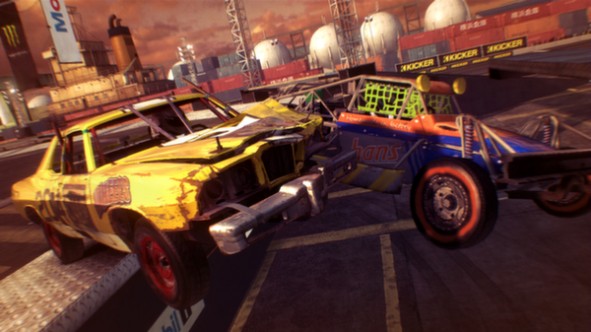 A surprising number of the events available to choose from are either entirely new to the franchise or only appeared in a very limited capacity in previous games which leads to what is mostly an entirely new experience depending on your experience with the series. The main focus this time around is on a variety of demolition derby events which are brand new to the Dirt games. In addition you have access to a few different closed course races which rather than off-road or rally racing are typically on asphalt tracks.

If this doesn’t sound very much like a Dirt game to you that’s because it kind of isn’t. In fact the game even features a boost button using a limited gauge that is refilled by performing antics on the course which sound more like something out of the Burnout games than anything else. Crashing into other cars on purpose is the last thing you would want to do in the previous Dirt games yet is one of the main goals in this one.

In addition the controls have a bit more of an arcadey feel to them as opposed to the semi-sim style racing you may be more familiar with. This all combines to create what is possibly the most easily accessible Dirt game to date, but at what cost? 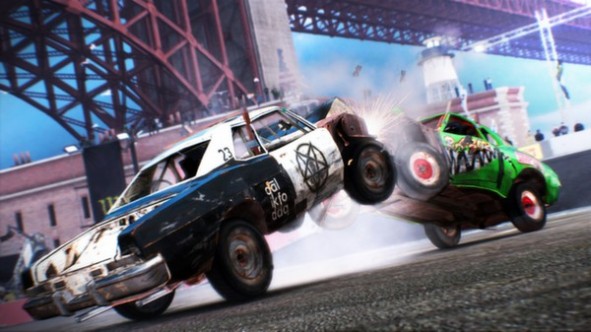 Though the controls are a bit more arcade like in nature they’re definitely just as responsive as they’ve ever been, just a bit more forgiving. No longer does hitting a wall essentially mean you either need to rewind or start over and as stated previously the game actually encourages damaging your opponents cars which is how you gain more boost meter.

One minor annoyance comes when you a car gets destroyed, as they leave behind a ghost of their shell for a few seconds which you can still interact with. This can be extremely frustrating in the various demolition modes as dead cars are stuck in your path after you destroy them, possibly leaving you open to be bashed yourself.

Though the focus is on demolition derby events there is enough variety present to keep things interesting as you make your way through the game. 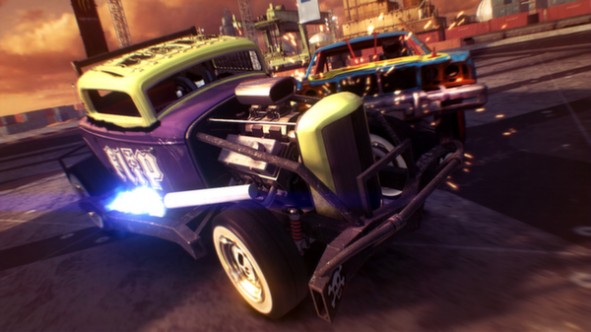 As you complete races and events you’re awarded different liveries and cars which become available for you to purchase and upgrade using the money you also gain with each win. For each race you can select from a variety of cars depending on what type of event you’re participating in and can upgrade different categories for each as well such as improving your speed and handling or the power with which you hit your opponents.

Upgrading your car properly can be the difference between placing fourth and third. Upgrades are a simple matter of putting points into different categories with no limits or choices to make so this is pretty straight forward: pump money into the car and it gets better. Whether or not this is a good thing depends on how you like to play racing games, but in the end it functions just fine for what it aims to accomplish.

This seems to be a persistent theme throughout the game…while things are very different, the game accomplishes everything it sets out to and when taken as the game it intended to be it does a splendid job of meeting its own goals.

Though the game is different than those that came before it that doesn’t make it bad by default. In fact taken as its own game Dirt Showdown is quite enjoyable. My biggest problem with the game stems from the fact that it still bears the Dirt title yet doesn’t feel like part of the franchise. However everything in the game is solid and though it’s not the kind of game I would like to play personally it’s enjoyable if it happens to contain what you’re looking for.