Disney Infinity was first thought of as a Skylanders clone because of the very clear and unmistakable similarity of taking toys and bringing them into a video game. What many people fail to remember is that Disney Infinity 1.0 also had a flare of Little Big Planet mixed in, allowing the player to create things from their imagination while plunking down wads of cash for figurines.

Since then, Disney Infinity has expanded and developed unique qualities; qualities that resulted from both the assimilation of the previous titles and Disney’s own additions. Now, with the new 2.0 version, we are treated to the worlds of Marvel in our toys to life adventures, specifically Spider-Man, The Avengers and the Guardians of the Galaxy.

Looking at Disney Infinity: Marvel Super Heroes (also known as Disney Infinity: 2.0 Edition), one of the biggest questions on many gamers’ mind is: what is the difference between 2.0 and 1.0? Simply, they added Marvel. They also added other features to improve the game while exploiting their very popular Marvel license, which is a good thing. 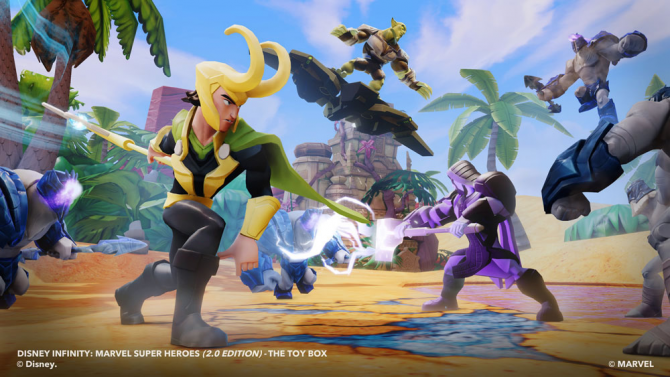 Purchasing the Starter set nets you an Avengers Playset and three Avengers to play with, along with a pair of Power discs. In the same style as 1.0, you need a Playset piece (World) and a figure in order to play the story-mode. Once you pick your world and figure it’s off to the races as you’re soon thrown into the world of the Avengers and taking missions to save the world from Nick Fury.

A big change with this year’s iteration is that characters can now crossover into each others world; the absence of this mechanic was a major flaw of 1.0. However, it still has some limitations, as not all characters can crossover and you still will need to collect icons to be able to bring over Rocket Raccoon to the Avengers Playset. But at least Disney is headed in the right direction.

Another new addition to 2.0 is the Skill tree, which makes leveling up mean something. Now when you gain a level with Thor or Iron Man it means you get a skill point to use in their respective skill tree, allowing you to increase their damage, gain a new power or super, increase their defense or a slew of other bonuses.

This is a nice step forward as well since in 1.0 leveling really didn’t have a purpose aside from saying that Captain Jack Sparrow was now level 8. What’s nice is that the skill trees are also added in for older figures, as well for all the Marvel characters. With the drop-in and drop-out ability to play co-op, the skill trees and the abilities that have been added to Disney Infinity, the game almost feels like a kid version of Diablo — which is certainly not a bad thing.

Controls in the game are pretty straight forward and simple to grasp: you run, jump and smash your way through villains while collecting as much as you can in the form of experience, currency or items. Certain characters can fly, which makes getting around easier, although there are always vehicles available for you to hop into. Graphically the game is charming and looks pleasing, using a comic book style that resembles the feel of the Playset you chose. 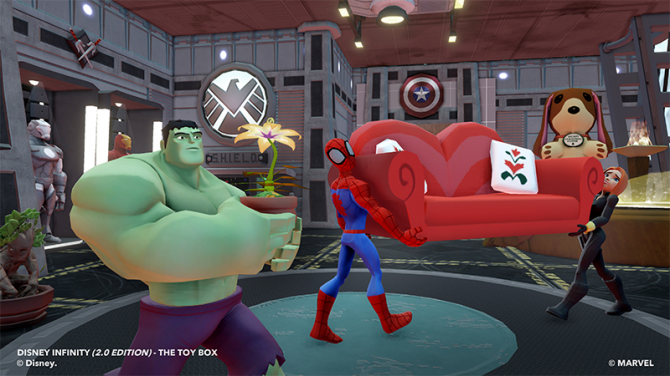 Toy Box mode is where a lot of changes have been made for the better, as the goal here was to make creation fun and, more importantly, simple. Want to start a new Toy Box? Great, here are some of the templates you start with: City Toy Box, Race Track Toy Box, Terrain Toy Box and Tree House Toy Box. Also, you can step into the Toy Store and buy any pieces you may want such as roads, buildings and town’s people. I spent a ton of the in-game currency for Marvel people on populating my Toy Box.

Community Content is also easily accessible and allows you to play other people’s Toy Box creations without having to build them from scratch. In the Community Content section you can quickly search through friend’s creations (or that of developers) even and pick form things like Hulk Bowling, Hero’s Duty and even Hail Hydra. The Toy Box really lets your imagination run wild and allows you to create, have fun and generally just be a kid again. In the Toy Box is where all gloves are off and you can really test the limits of the game and have Thor wield Buzz Lightyear’s blaster while leveling up by zapping hordes of aliens.

To be honest, this game appeals to both gamers and figurine collectors since the toys are well made and look very cool. Disney is taking full advantage of The Avengers and Guardians of the Galaxy being box office smashes and allowing young gamers to now bring those characters into their living rooms. It also gives any child or adult that grew up reading Marvel comics the ability to buy their favorite Marvel characters and do battle in a digital world. In other words, pretty much a dream come true for any fan. 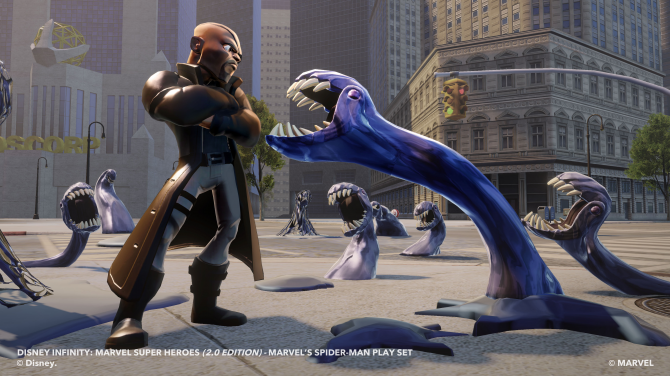 One thing to keep in mind when thinking about grabbing up 2.0 is the age of the consumer who will be playing with it. This is a title that does not lack creativity, cuteness and charm and is made for younger gamers to take part in that creation. In other words, if you plan on purchasing this set for your own child, make sure they are old enough to understand and make proper use of the tools. The title is, however, more than suitable for parents and children to play together and bond over.

As with any game, there are a couple drawbacks. The first is that of any of these toys-to-life titles require you to use a lot of real life money to purchase the full set. Another setback is the very long and drawn out loading times, which can detract from the overall experience at times.

All in and all Disney Infinity: Marvel Super Heroes is a must have for any comic book fan, figure collector or just someone looking to introduce video games to a younger crowd. Of course, if this edition is successful enough, it might even pave the way for a 3.0 version starring all of our Jedi friends, which would be a very magical outcome indeed. Anakin Fights the Dark Side in New Trailer for Disney Infinity 3.0’s Twilight of the Republic Campaign Review the Accolades of Disney Infinity 2.0 in its New Trailer