Finally Fantasy III comes to the PC to remind us where most JRPGs stole their ideas from. This port of a remake of a 24 year old classic shows us everything we loved and mostly hated about JRPGs of the old days.

Final Fantasy III for Steam is a port of the Nintendo DS version, which was a 3D remake of the Famicon version that came out over 20 years ago in Japan (and never came to North American shores). For me, this was an opportunity to go back in time to fly an airship and save the world with children.

Stop me if you heard this one before: four young people with a thirst for adventure with goofy hairstyles are told by a magic crystal that they all are only ones who can save the world from an impending doom. While not the most original story to ever grace a Japanese RPG, you do end up falling in love with the very likable heroes of light. There’s a subtle optimism and can-do attitude and oozes through every line of dialogue in this game that you don’t see anymore.

III is a great history lesson in JRPGs, since it was one of the highest regarded Final Fantasy games in Japan. What made this fantasy special was the re-introduction of the job class system that was eliminated in Final Fantasy II. Each character can change jobs in order to combat whatever goblin, evil wizard or giant turtle monster you’ll encounter. 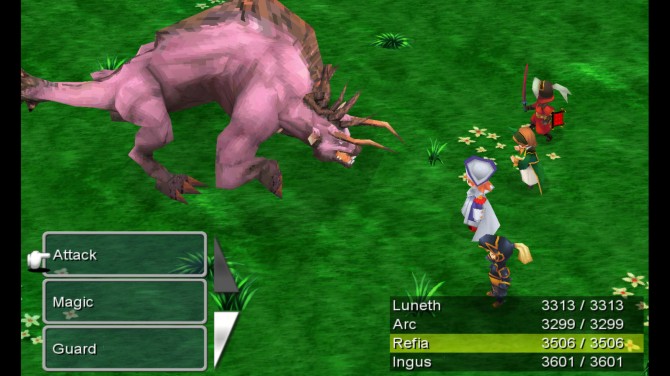 It’s great seeing the early incarnations of beloved Final Fantasy classes like Summoner, Red Mage and Dark Knight do their thing. My personal favorite is the Dragoon class, which possessed the trademark “Jump” ability. They also looked really cool with their giant helmets. I should mention how cool it was to see the “Summon” skill show up for the first time. Calling for Shiva and Bahamut felt like I was seeing an old friend swoop in to save the day.

The combat system plays out like a typical turn based RPG. Each character will take a turn to either attack, use magic,  guard or use an item. While you can pretty much spam attacks to get through most battles, end-game requires players to pay more attention. Choosing the right time to guard or use an item will save you a lot of grief.

Boss battles will make you think about which classes to choose for these fights to the death; it’s also about finding the right combination of classes that work together best with each other. For example, having a high magic stat wizard learn White Mage abilities to take advantage of said stat for healing.

Since every character can become any class, it is imperative to find out what classes work best with each character. The only problem is that the only way to figure out what works is to get your butt kicked a bunch of times in. With 23 jobs in all, you want to grind and experiment a bit to see what works, which is the half the fun. 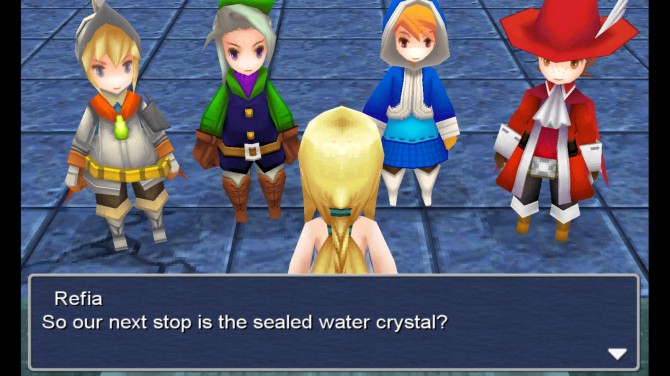 Final Fantasy III on DS was a beautiful remastering of its 1990 counterpart. The sprite design and wonderful 3D environments look truly incredible on the small screen. Blowing it up to a 24-inch PC monitor on the other hand reveals dated visuals with incredibly low-res textures. I’m not saying it’s a bad looking game, though. The world is wonderfully colorful and feels like what a kid would see when they play pretend fantasy heroes with their friends in the backyard. The only problem is that the graphics seem like they never got an upgrade from the 2006 DS version.

III is a traditional JRPG in every sense of the word. Do not play if you don’t have the patience for a ton of random encounters and a very high amount of level grinding. Considering this game is over 40 hours long, hardcore JRPG fans will most likely appreciate a look back at the genre’s roots, while the less nostalgic gamer will likely pass and respect it from a distance.

Furthermore, the asking price of $15.99 seems a little steep for a near direct port of a eight year old DS game. I find it tough to recommend it to just anyone. If you’re serious about Final Fantasy, though, you’ll love the familiarity of the classic turn-based gameplay and seeing franchise regulars again (Cid <3).

Unfortunately, in the hierarchy of Final Fantasy games, III doesn’t have the same magic of the Chocobo riding adventures that followed it.