Review: Gears of War: Ultimate Edition – A Glimpse of the Past Review: Gears of War: Ultimate Edition – A Glimpse of the Past

It was pure nostalgia in the beginning. The gritty monochrome title screen reminded me of a time when my cousin and I would religiously cement ourselves over Xbox Live and tear down through the brood of Locusts that enveloped our televisions.

The essence of co-operatively gameplay formulated around this time, and it was genuinely exciting from start to finish. I took a deep breath and smiled at the title screen as it fizzled onto my computer monitor -– a smile brought on by seeing and accepting a familiar face with whom I shared defining memories as a gamer with.

I welcomed the humble reintroduction as I stepped back ten years in time to relive a game with glistening bells and whistles of today’s HD inspiration.

Gears of War: Ultimate Edition on the PC is a visual delight when comparing it to 2006’s Xbox 360 release. Although for its time, the Xbox 360 version was – to some degree — a visual treat, the ultimate edition revisits the world of Gears of War with far more granular observable detail.

Shiny everything (if you can recall the Xbox 360 version) has been reduced to more streamlined and more realistic, textures with a more prudent highly defined crisp, also ridding of the marshy blobs that were once visible. Cutscenes were reconstructed from the ground up by The Coalition to give it a modern taste of 1080p delicacy with a nice coating of 60FPS, which was a refreshing change.

While it all seemed familiar (because it was), the remade scenes subtly added a new sense of adventure -– like watching a movie you haven’t seen in a long time: I knew where it was going, but that doesn’t necessarily mean that it wasn’t enjoyable every step of the way. 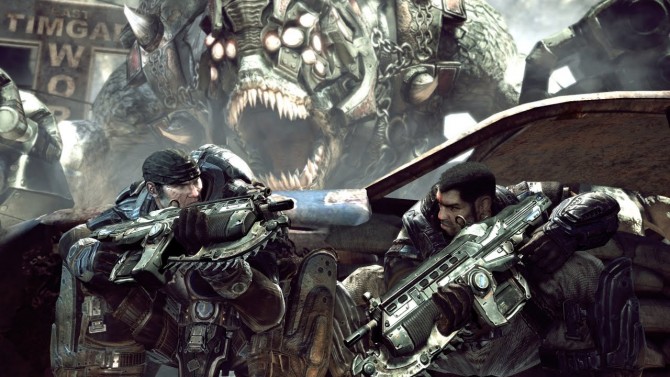 Aside from the obvious graphical improvements made to Ultimate Edition, additional changes were made which impacted the overall content and design of the original game. Co-op, for example, is now drop-in/drop-out, allowing players to also join in the middle of a chapter.

In addition, veterans of the franchise will also recognize the individuality of changing difficulty settings based on player preference. This is a treat for those of us who don’t want a change in difficulty to accommodate newer/more skilled players of the game, allowing us to keep the pace we enjoy as is because, god knows, how frustrating it was to join a game with someone playing the game at the highest difficulty setting to only have you get devoured by the enemy. I’ve been on that side of the fence a few times and it definitely wasn’t enjoyable.

Going back to content, there were five chapters in the older PC version of the game that never made it onto the console version which involved Marcus and Dominic (“Dom”) making their way toward a train station through a few deserted factories whilst running from a gargantuan Brumak.

The scale of the creature, although it brought on a sense of anxiety at certain moments, was the least of your concern. Why is that, you ask? Well, simply because there is a portion that involves you taking it down –- a portion that is simultaneously satisfying and aggregating due to your partner’s inability to use common sense (AI). But, we’ll get to that in a moment.

The new chapters in Gears of War: Ultimate Edition fits well with the pace of the original execution of the console version. I forgot just how, underneath the grimy action that enveloped the game originally, creepy and horror-driven the ambiance of the game actually was.

Quiet corridors suddenly gasping with the sounds of screeching Wretches occasionally sent chills up my spine. Or, alternatively, when muted sounds were gradually filled with the thumping accent of a Wretch’s gallop. It’s a shroud of horror that is ultimately overlooked by the clever disguise of a bloody, brutal war. It’s something you don’t expect, but is satisfying when it hits you. 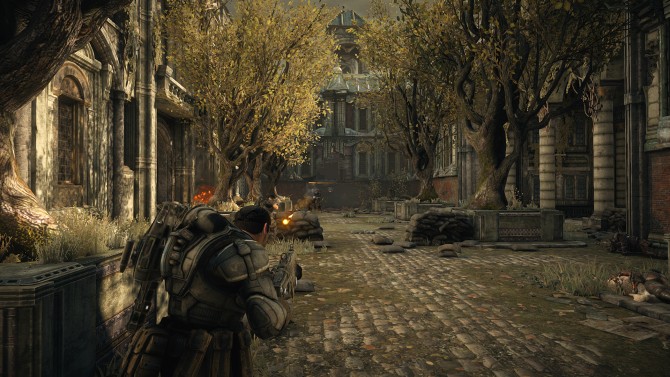 The controls have also been “tightened,” making maneuvering feel a bit more fluid rather than cumbersome as it did before. Sure, we can say that, by design and considering the equipment and armor worn by Gears, the clunky controllers may have been acceptable to add more practical feel of movement; but it just felt heavy.

With the changes brought on in the Ultimate Edition, there is a more cursive sense of control that, while keeping the hulking experience intact, feels less unwieldly – an excellent job ameliorated by The Coalition.

In spite of the game’s visual fidelity and subtle, and welcoming, changes to the feel of the game, however, the underlying issues plagued by the original version still exists below the grandiose façade. The AI, for one, was probably the most frustrating of the issues that accompanied the remaster. Dom wandered into obscure places where he wasn’t supposed to be, derailing from following me, where it would lead to his death time and time again; there were moments where game progress often relied on the AI’s participation in turning a switch and nothing would happen; and, more than anything, the AI would just not move. Literally, a new chapter would start and the AI would blankly stare at whatever the hell it’s staring at and just watch me head off into the distance until a checkpoint would spawn them at my location. The “Regroup” command, unfortunately, did nothing to mend the situation.

The AI became a chore and, at times, a portion of the game that I sometimes wished were optional to avoid frustration. While it was supposed to add an impression of teamwork and harmonic partnership, it leaves you feeling discontent and deserted -– something I earnestly hoped would be fixed in a next generation remaster.

Outside of having to deal with trivial AI, Gears of War: Ultimate Edition also managed to bring with it other long-forgotten problems that tormented the first game. There were moments in the game that required me to reload checkpoints simply because cutscenes would not activate, or an in-game action would not execute as it should which, sadly, also lead to loss of progress. 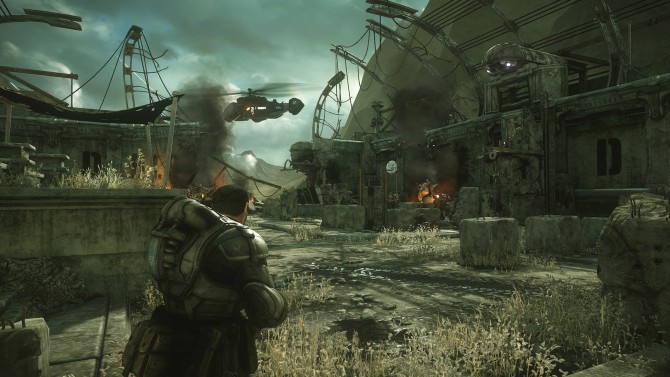 Gears of War, while undoubtedly entertaining in its brutal gunplay, is poorly designed in how the game manages to characterize how progress should be made. Virtually all progress in the game revolves around you eliminating every single enemy before you can move forward.

And while it is fun for the first few times, it becomes can become a bit daunting as the formula of enemies and ways you can kill them is very limited. Add to the AI element, and you’re often times finding yourself looking for the enemy to kill because they’re stuck behind some object or just standing still -– an infamous attitude perpetuated throughout the game by AI.

Although the original game’s issues managed to mitigate onto this remaster, I found myself loving Gears of War again for one reason: playing with people. It is and has always been the bread and butter of the franchise, in my opinion, and what enhances the experience. Sure, when the AI is working, the personal experience can be just as gratifying. But it isn’t until you introduce an additional human element into the equation that the game stands out as a solid, beautiful co-op adventure.

While my friends didn’t have the PC version of the game, I managed to play along with a few online folks who joined my sessions, making the overall experience abundantly more sound and pleasing. I didn’t have to progress, or lack thereof, through the game waiting for the AI to fail me or be killed by their own stupidity.

The multiplayer component of the game’s co-operative play was, as with the original, undoubtedly satisfying. The Coalition also managed to introduce some new game modes and a new map to the competitive portion of the multiplayer — all of which were enjoyable as I cemented myself into the rush of replaying through maps which served an abundance of fond memories such as Depot and Bullet Marsh.

Gears of War: Ultimate Edition brought back a lot of fond memories of a game that introduced a lot of welcoming dynamics. I can vividly recall sitting in front of my computer and feverishly re-watching the “Mad World” commercial for a game that looked to change how we fundamentally embraced the co-operative genre. And it a lot of ways it did. But just as it brought back wonderful nostalgic recollections, it also managed to pull with it the egregious issues that inherently haunted the first game. 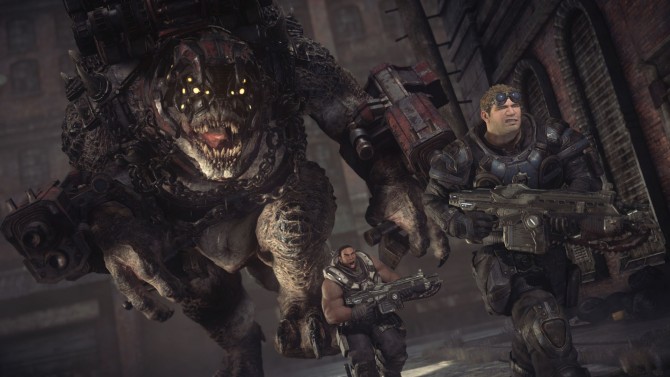 With a remaster of this caliber, you expect there to be a level of refinement that goes beyond the visual accuracy accommodating to today’s principles; you would expect that, with elevating the graphical presentation, the technicality of what drives the experience -– the synergy of the AI -– would receive a constitutional upgrade to marry the visual augmentation.

Based off of the nostalgia that Ultimate Edition revived, it is a game that hold a special place in my heart. The new maps and games modes in the multiplayer were a welcoming addition, and the added content to the campaign mode, accompanied by the graphical upgrades and new cinematic retelling are compelling inclusions to this remaster.

But where it falls on its face is in the lack of oversight in mending the issues that made the original game disappointing –- the AI. It’s a game that promises entertainment and, in that, it does deliver; but it will, sadly, also bring just as much discontent as it involves interfacing with a questionable Artificial Intelligence system that will frustrate you. A game with polish, but not enough polish in areas where they matter.