Review: GOMO is the Boring Tale of Love for Man’s Best Friend

Review: GOMO is the Boring Tale of Love for Man’s Best Friend

We all have people and things in this world that we cannot live without and for Gomo, it’s his four-legged best friend Dingo. However, one fateful night Gomo’s love is put to the test when Dingo is kidnapped by a mysterious and rather random alien.

In order to have Dingo safely returned, the alien demands a mystical red crystal artifact instilled with power that lies well protected in a subterranean mine, which requires you to put on your thinking cap as a multitude of puzzles separates you from your hairy friend.

After playing this game, I’ve come to the conclusion that sometimes love does not conquer all and when people or dogs are no longer in your life it can be for the best.

Let me start off by saying Gomo is beautifully designed and drawn. While the gray concept and dark colors are simple, the hand-drawn characters and landscapes are magical. They suck you in and draw you closer to the game, reminiscent of a Tim Burton stop-animation movie or his childhood drawings.

Every so often you’ll get a pop of red or a splash of light that’s beautifully highlighted, breathing fresh air into the game. Gomo himself is designed rather simplistic, as if he was inspired by a potato sack, yet it feels whimsical and almost childlike. It proves that in a world of 3D where everything features lively colors and overwhelming graphics, 2D artwork can be just as expressive as what any computer can generate. Then I played the game and well…that’s where the praise ends.

Gomo is a point-and-click game that is inspired by Machinarium, which means there are no instructions or dialogue, just pure unadulterated music and sounds to drain out your cries of frustrations as you try to figure out how to solve puzzles and obstacles courses. It took me a while (2 minutes) just to figure out how to open the door at the beginning of the game.

While this tactic is suppose to evoke a heightened sense of accomplishment after finishing a puzzle, this “happy dance” feeling quickly fades as you discover the puzzles become simpler as the game progresses. Maybe they do things differently in the Slovak Republic but Fishcow Studios needs to discover the power of complexity. By the time I completed the fourth puzzle I found myself tuning out to the game and just going through the motions, pointing and clicking mind-numbingly. Bejeweled produces more brain activity.

As I stared at my computer stumped and baffled on how the game felt like regret and broken promises, I came to the conclusion the overall feeling of Gomo stirred in me was not inspiring. It happens to the best of games but Gomo gives the independent genre a bad rap. Usually they are fresh, original and creative. They aren’t limited and as a result you’re blown away by their out-of-the-box style; for instance, Limbo comes to mind.

However, Gomo is the forgotten child that is left in the back of the closet and as a result it’s stunted in every possible way. It’s as if a student was too lazy to finish their homework so they copied and pasted off Wikipedia and threw a shiny cover page on top in order to hide their laziness. 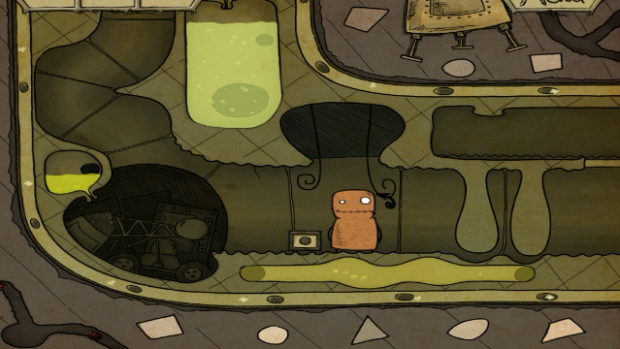 Even though Gomo features very impressive 2D artwork, sadly there’s no interaction with the world. Yes, you can pull a switch here and move a block there but this game would have been a lovely immersive experience (much like Disney Infinity) if only it was fleshed out more. It plays like a bullet points for the first draft.

There are small moments that give a sliver of hope. Gomo is rather clumsy, which gives him a semblance of a personality, and there is borderline interaction with the environment. He manages to hit himself with doors, lacks coordination and is incapable of packing items into his body with finesse.

After a while this too gets boring and Gomo starts to look like a simpleton that you feel guilty laughing at instead of the adorable character he’s meant to be. As for interaction with the environment, one could argue random spiders climbing on the wall or the occasional appearance by a rat is technically environmental interaction.

The only other best thing I can say is that the game a rather short, making recovery from the mundane as quick as possible. Sadly in no shape or form can I confidently recommend this game unless you have a child literally dying of boredom and there is nothing else available, or you need a new technique to punish said child. Gomo fails to have a voice or even match what’s already out there. Instead, it leaves players begging to be put out of their misery.

If given the choice between Gomo and any other game, choose the latter…even if it hasn’t been created yet.

Set in the subconscious of Frost, this year's Halloween event for Rainbow Six Siege is especially weird with the introduction of puppets.

Battletoads Hits One Million Unique Players in Under Two Months