In the wonderful world of small indie games, there’s no shortage of puzzle games and as such it’s going to take something special to stand out from the crowd. Into this crowd steps Hamilton’s Great Adventure, a puzzle game about a treasure hunter who is accompanied by his faithful bird companion Sasha. Together they’ll gather keys, press switches and avoid enemies as they solve these puzzles in search of something more.

Does Hamilton have what it takes to stand up against the swarm, or is it just another mess lost in the crowd? 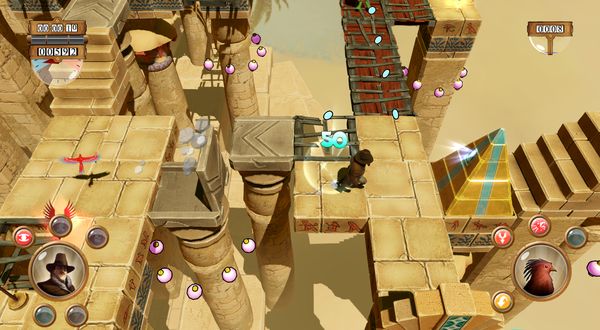 The basic premise of Hamilton’s Great Adventure is pretty simple; get to the end of the level. Ultimately this is your only goal as you navigate the twisting maze-like levels to reach the end point. Getting to the end however is a little bit more tricky and nowhere near as straightforward as it seems most of the time.

As you navigate Hamilton through the levels you’ll notice a few things, the first being the little red bird following you around. This is your loyal companion Sasha, and she is key to getting high scores. The second thing would be the different treasures scattered around the world: the first being the coins along the walkway (which can only be picked up by Hamilton) and floating purple orbs (which are Sasha’s to grab).

This brings to point the fact that you’re not just controlling Hamilton, but Sasha as well. On the PC version Hamilton is controlled with the keyboard and Sasha with the mouse. Picking up the floating purple orbs is entirely optional, but from time to time you will have to utilize Sasha to reach switches that are out of your reach. To make her fly somewhere you simply click where you want her to go, right clicking to interact with something and pressing the middle mouse button to scream. Her scream will serve a different purpose on various enemies patrolling the environment, either stunning or distracting them most of the time.

The problem with this is that despite what the in-game story will tell you, Sasha isn’t the brightest bird in the world. Often she’ll have trouble figuring out a way to navigate to the point you’ve sent her to and will frequently be stuck just flying into a wall, forcing you to navigate her around the object in question to reach her goal. This is frustrating to say the least, particularly on some of the more timing specific puzzles later in the game where you can’t waste any time. 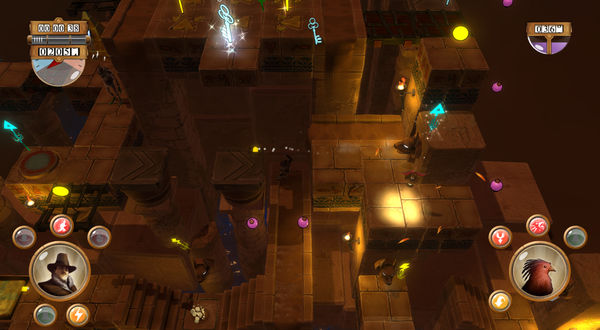 The early levels are pretty simple, requiring little coordination between Hamilton and Sasha and nothing trickier to navigate than blocks that just fall away after you step on them. New challenges in the levels are implemented at a nice pace as you progress which prevents the game from falling into a rut, but are spaced out frequently enough to not overwhelm you with new devices. Slowly the difficulty will increase and the amount of planning required for each level will increase.

Often the levels will have multiple branching paths, some of which are just more treasure for you to collect. Most however will have require a trip down them to activate a switch to allow your eventual escape. If you rush around too haphazardly you’ll often find yourself with no way out and forced to restart the level as you have trapped yourself. This is of course entirely your own fault, though sometimes it will take some experimenting and restarting on levels to figure out what the right path is.

This can be a little frustrating on the longer levels as you’re forced to start from the beginning and re-do anything you’ve already done. Proper planning will prevent this, but with new blocks and sometimes winding paths it’s not always that simple. 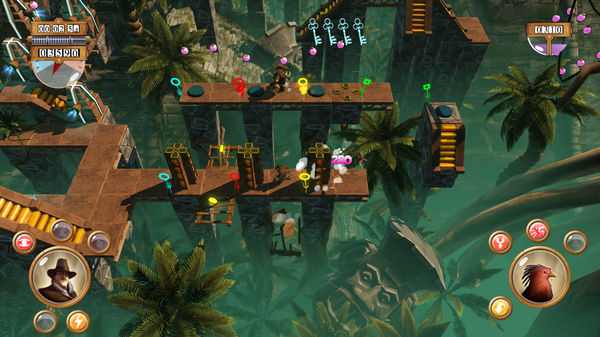 Hamilton’s Great Adventure is a game with a lot of content, and a surprisingly large amount of story being told. This is done in the form of an older Hamilton reading to his granddaughter, with the actual gameplay being the story he’s telling her. These are done with mostly still-frame images and scrolling text, with accompanying reaction / expression noises from the characters. This helps tie together the different puzzles and locales, though some of these sequences are a little long and sometimes you just want to get back to the puzzle action.

Thankfully there is a LOT of puzzle action available with over 60 levels for you to push Hamilton and Sasha through. The controls are solid for the most part aside from some frustrations with Sasha from time to time, and while things can be overwhelming in the later levels with the large amount of different devices in your way it never becomes too much. If you need a reminder on who a certain character is or a specific trap or puzzle device there’s a section in the pause menu for this, so you’re never left in the dark.

Hamilton’s Great Adventure is a charming title with a wonderful aesthetic design and despite the story mostly taking a back seat to the action, interesting characters that are full of life. With a large amount of puzzles which are all very different from each other, this is an easy recommendation to puzzle fans. Hamilton’s Great Adventure Set to Embark On May 31st