One unique appeal of video games is that they can make generally mundane or unremarkable undertakings seem exciting and enjoyable. You might not think that too many interesting stories could come out of a video game about nursing students, but you’d be totally wrong if Nurse Love Addiction from Kogado Studio was involved. Thanks to a quirky main character and strong humor, you’ll want to delay graduation day as long as possible.

While the most talked about visual novels these days incorporate more interactive gameplay components, Nurse Love Addiction takes a more classic approach, with gameplay consisting completely of text, illustrations and the occasional choice. Our heroine is Asuka Osachi, a fiery but lazy teenager who aspires to be a nurse for reasons she herself isn’t yet sure of. 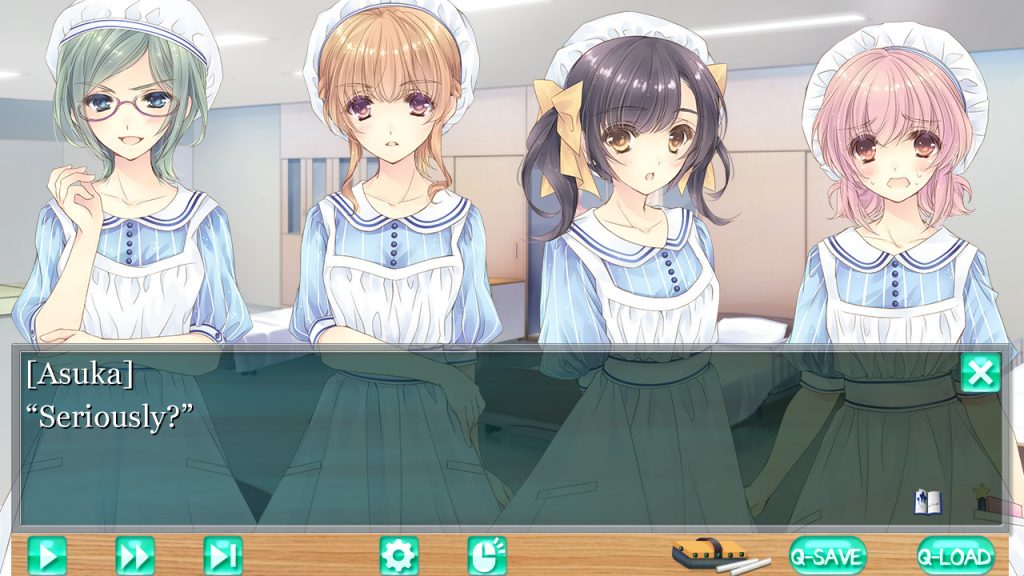 Along with her sister Nao (who will follow her beloved sister wherever she may wander) Asuka embarks on a journey to the day she dawns her own prestigious white nursing robe; a direct translation of the game’s Japanese title is actually White Robe Love Addiction. The game’s title is apt in either language since the characters don’t only have a strong fondness for the nursing profession and the study of it but also build love for one another over the course of the game.

They attend an all-girl nursing academy and you can build romantic relationships between Asuka and her classmates. Asuka can be easy-going to a fault, at times exhibiting a weak work ethic and slacking on her increasingly challenging studies, but her heart is always in the right place so she’s easy to encourage. Despite her best efforts she just can’t get ahead sometimes, but she doesn’t give up. The game features beautiful character designs and illustrations. 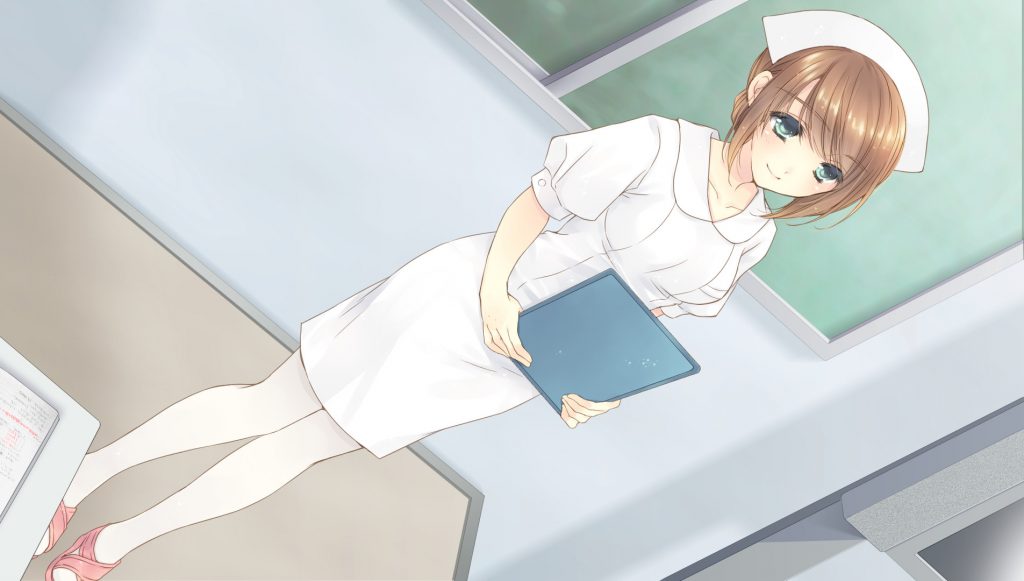 The huge, colorful eyes and dainty features of all the characters in tandem with the all-girl cast give the game a shojo vibe. The background images are adequately detailed and varied if unremarkable, and there is a good amount of unique event artwork, introduced frequently enough to keep the game from feeling too static and flat. Unfortunately this works only to a certain degree, as some longer scenes still end up feeling a bit drawn out and boring, especially compared to the fancy camera work and animations in some other modern visual novels.

The music in the game is generally peaceful and unobtrusive but there is too little of it compared to the overall length of the game. Once you’ve heard the same track for the 30th time after a few hours of playing, it isn’t as relaxing anymore. Thankfully you can easily add your own music by just adjusting the BGM in the settings whilst retaining character voices. 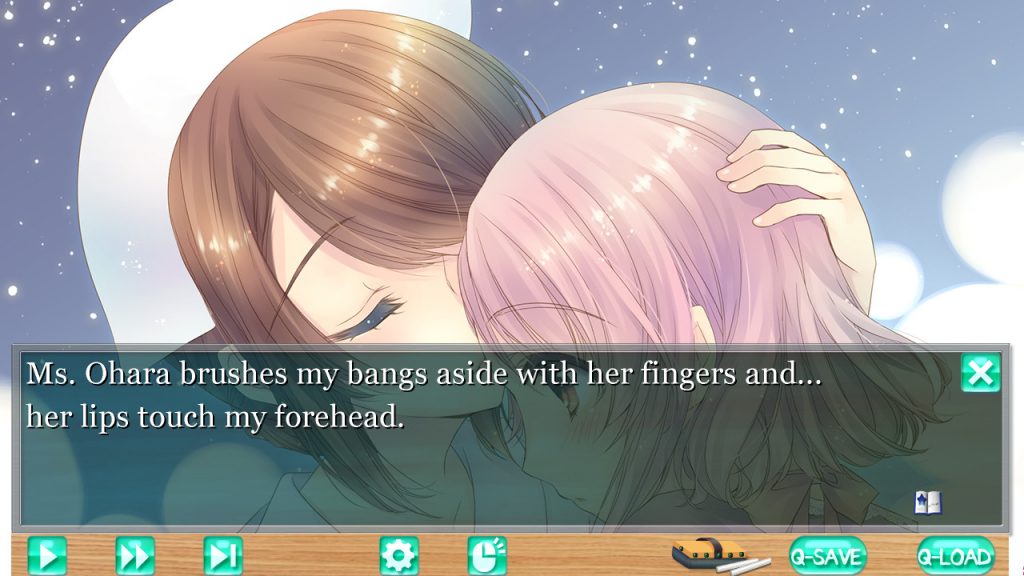 The game features full voicing, retaining the Japanese audio. This is a big deal here thanks to a tremendous volume of character dialogue and exchanges. There aren’t that many characters in the game. The main cast consists of roughly a half dozen girls. It would have been nice to see more nursing students and more character designs.

You will make choices throughout the game that influence which scenes you’ll see. These culminate in a variety of possible endings, so fans who want to see every scene and word of dialogue will need to play through the game multiple times. The game features a nice skip option which will zoom past any previously read text and thankfully it goes fast enough to make it viable for those like myself that absolutely hate re-reading the same text in this kind of game. 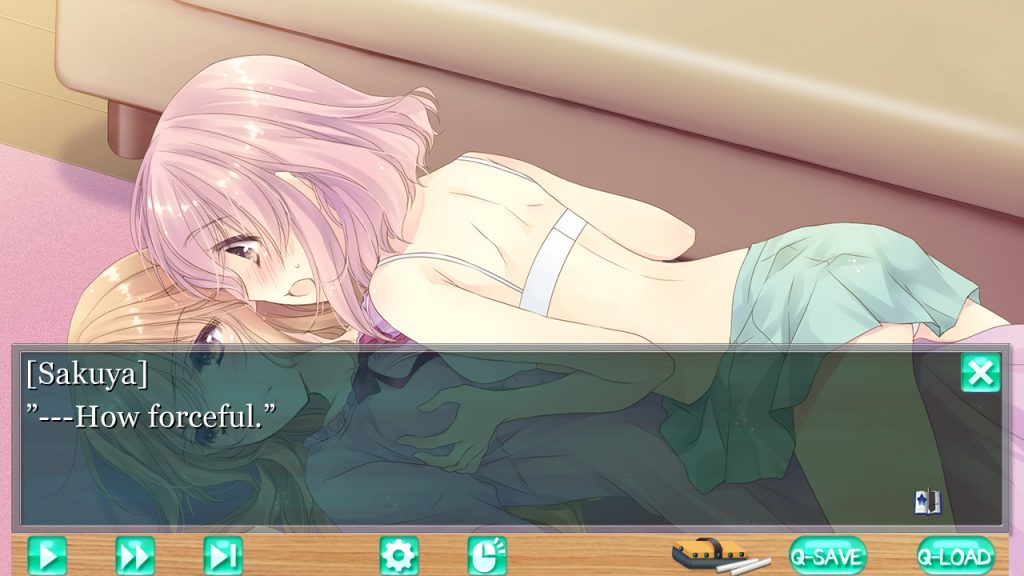 The game keeps things interesting with a variety of scenarios. Asuka will find herself in the most awkward of positions and you’ll find yourself often laughing at the hilarious responses and scenes the game packs in. It’s also rewarding to see significant effects of your decisions influencing the story, although it takes longer to see this.

The game also features a fan service component that genre fans will be happy to see. You can imagine how the girl-on-girl premise is used to whip up some gratuitous scenes. There’s also dialogue about characters sleeping nude, growing bigger busts, bondage and much more. All of it is relatively light and there’s nothing too extreme (there’s optional incest) but it is entertaining nonetheless and mostly humorous. 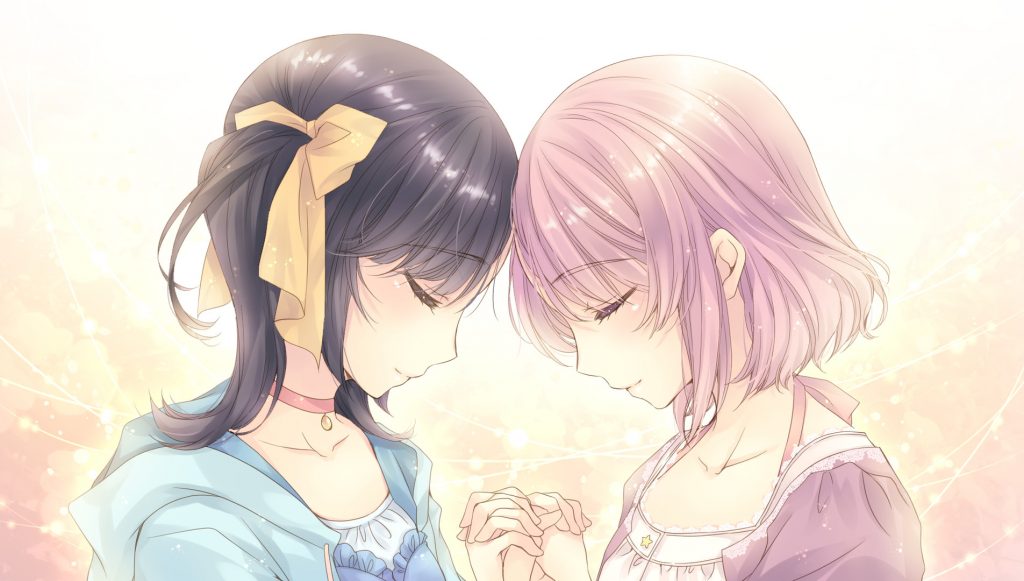 While I may enjoy the occasional pure visual novel, it’s hard not to feel like the game could have been better with a more interactive gameplay component. A rip off of Trauma Center for some well-timed mini-games seems like low hanging fruit. Maybe some of the tests could have required player input and requested information stated earlier in the game ala Persona. As it stands the game may only appeal to fans of pure visual novels, but perhaps it is better off without a forced or half-baked gameplay element. 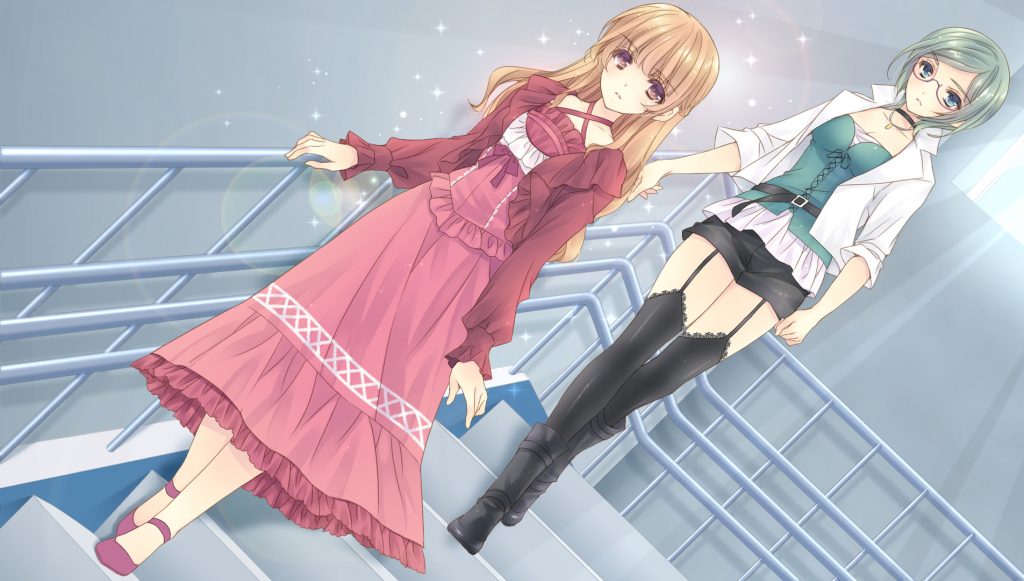 In the end I think the game could have benefited from some of the more sophisticated animations we’re seeing in new VNs, as well as a bigger soundtrack. The characters’ mouths don’t even move in this game. Also some full on anime scenes could have made certain scenes a lot more epic and dramatic. Weaker production aside, Nurse Love Addiction should definitely satisfy genre fans. Asuka’s tale is lengthy, exciting and full of surprises.

The $39.99 price tag may bring pause to some gamers, but the length of the main scenario justifies the price. The gorgeous art, choice fan service, enthusiastic voicing and compelling overall story make the game an easy sell for those who like visual novels, although the appeal ultimately won’t be as great as something like Zero Escape or Phoenix Wright. Hatsune Miku is Singing Her Way Into Oculus

Groove Coaster is Getting an Undertale Collaboration on Steam

Visual Novel Maker Gets Details and Release Date on Steam

Code of Princess is Hacking Over to the PC Soon