As a PC gamer, one of the most difficult things to do is constantly research and buy your next hardware upgrade. Whether it be for your spanking new rig that you’re building for next year’s graphical behemoths, or your current system which you’re looking to bring to today’s standards, PC hardware can be a tricky thing; and, at times, even fairly expensive. We usually want the best performance for as little money as possible. After all, we want to make sure that what we  purchase future-proof’s our systems for a while before having to reach into our savings  and punch our bank accounts in the face with a hefty buy. And with today’s constantly evolving hardware, new technology tends to be dramatically more expensive than what we have become accustomed to. Some might contemplate whether or not spending an extra couple of dollars is even worth the upgrade at some points.

I’m here to reassure you that, although the technology might be more expensive that what you’re used to, you’re — without a doubt — paying for a quality product that offers a tremendous boost in effectiveness and performance. Say hello to  OCZ’s Vertex 3 240GB SSD (Solid State Drive) — a drive that comes with the mentioned bulky price, but promises nothing short of raw gain in potent performance.

The OCZ Vertex 3 SSD supports the new 6Gbps SATA 3 standard. It showed stellar performance in my testing, enough to even justify the $500 price tag for the 240GB version (which is pretty decent for SSD standards), $250 for the 120GB version, and a whopping you-must-be-rich-to-get-this $1,800 for the 480GB version. I know what you’re thinking, “Dude, you’re an idiot if you’re even considering that. That a new super-duper-uper graphics card! WTFOMG!” One word, folks (and you will read this numerous times in this review), and three syllables: Per-for-mance. It’s the one leverage that will push the Vertex 3 above its competitors, along with the pretty reasonable price tag.

If your machine, whether it’s a Mac or a PC, supports SATA 3, then the Vertex 3 makes a worthwhile investment and will increase your computer’s performance significantly — this I promise you. The drive, although it supports 6Gbps SATA 3, also works with the existing, and still popular, 3Gbps SATA (SATA 2) controllers and at much faster speeds that your regular old hard drives (HDD). If you’re looking for top-notch noticeable performance, do yourself the favor and ditch the relics that are HDDs and migrate your way over to SDD. Although it might seem like it will put a dent in your pockets, the overall qualities are enough to consider for investment, as they outshine the relics that HDDs are becoming. 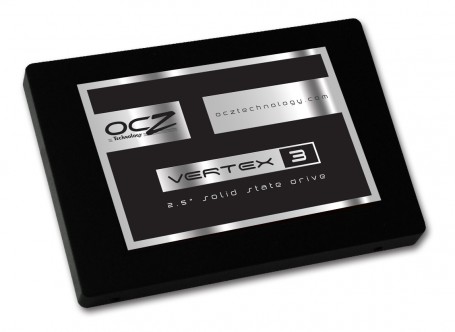 Now, on to the sexy pieces of the Vertex 3. OCZ’s Vertex 3 series is aimed at performance buffs with initial SF-2281-based models offering the aforementioned capacities. A slim and sexy 2.5“ design, with a weight of just a measly 77 grams, will be a light addition to your laptop or PC. The drive itself consumes two watts of power when in use (yes, you read that correctly. There’s not typo there — I checked) and just 0.5 watts whilst on standby. Which is, as you can imagine, a blessing considering folks like myself have an issue with powering off their computers.

The model that we received for testing — the 240GB model — packs read speeds of 550MB/s and write speeds of 520MB/s. Not too shabby, right? You bet your sweet ass it’s not. But in order to achieve those natural speeds, you’re going to have to make use of the SATA 6Gbps interface. The only problem with this, however, is that the only platform that provides any sort of native SATA 6Gbps support is Intel’s new Sandy Bridge platform, which can be a deal breaker for some, and a heavenly feature for others.

There are third party solutions that do provide motherboards with SATA 6Gbps support, though, But when compared to Intel’s, it’s pretty much crap due to painstakingly poor results. It’s not to say that there are no controllers out there that can somewhat mimic the performance of Intel’s chipsets, because there are. Even as we speak, support for SATA 6Gbps is improving significantly — so there are solutions that will be readily available to make full use of product’s like OCZ’s Vertex 3.

Like the other models in the Vertex 3 series, the 240GB model is loaded with MLC NAND (25nm) flash memory. It has sixteen 16GB Micron 29D128G08CFAAB NAND ICs for a total capacity of 256GB. You’re probably wondering why the heck OCZ decided to mooch 16GB of space from the Vertex 3, but the reason for this is because those 16GB is specifically reserved for data parity (8GB for RAISE), block replacement, and garbage collection.

Once the drive is formatted under Windows, the drive drops down from 240GB to 224GiB due to the GB to GiB conversion (almost a %7 lost). It also uses data compression technology called DuraWrite — a technology designed to help lower write amplification and extend the drive’s life by using fewer program-erase cycles. The great thing about this is that it doesn’t require a memory buffer (woot!); the sucky thing, however, is that it uses more storage space on the drive.

While you’re pouting about the above, take note that OCZ has given the Vertex 3 a two-million-four MTBF (Mean Time Between Failure) rating (which probably won’t mean anything to the consumer), and a three-year warranty, which should help you rest easy and turn that frown upside down knowing you have pretty good product coverage.

Take into consideration that, while manufacturers claim superb peak I/O performance out of the box, the overall performance can diminish over time. Unlike conventional hard drives, any write operation that’s done to an SSD is a two-step process: a data block must be erased and then written to. If the drive is new and out of the box, there will be nothing to erase and therefore bypasses the first step.

I have used both AS SSD and CrystalDiskMark 3.0 in order to run some good ol’ tests on OCZ’s Vertex 3. Tests were ran numerous times in order to try and achieve peak performance. Although an additional SSD drive wasn’t available for testing on-hand with the Vertex 3, you can use this as a reference when comparing it to other SSD products available.

-Restart into Windows and Secure Erase the drive 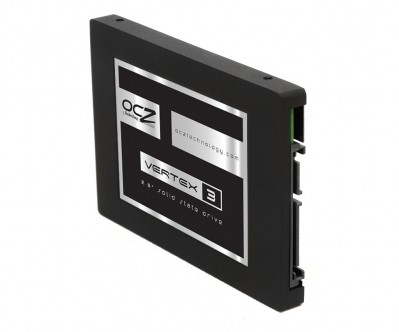 With the clear picture indicated above, one can see what the Vertex 3 packs in performance, which is very incredible  when pitted up against other SSD contenders on the market.  It’s a piece of hardware that will benefit consumers looking for a gain in overall quality and performance. Although the product itself might seem a bit pricey and intimidating, it is, in fact, competitively priced when compared to SSDs that are currently flooding the growing industry. How does the product fair for gamers? The one thing that we PC gamers rely on, above a beautiful looking rig, is peak performance with the products that we embed in our systems. It is the single thing that pretty much dictates the experience we will receive, and how long those experiences will last. We want something that will downright give us the best representation for what we spend our hard-earned money on; and the Vertex 3, without a doubt, delivers.

Would I recommend this to every single consumer out there? No. Unless you have a quality SATA 6Gbps controller, I would say to reconsider as the overall performance will be severely restricted. If you’re up and about with Intel’s Sandy Bridge-based machines you’ll be excited to know that you will be able to fully utilize the drive, along with folks who have recently purchased a mobo that features an updated Marvell controller. It’s a worthy investment only if you have the worthy hardware to take full advantage of what it can truly achieve.

Solid State drive is still a tad away from becoming fully mainstream due to the hefty introductory price-tags that consumers are afraid of ogling. The introduction of faster SATA 3 6Gbps drives, however, will surely help to push down the price of much slower products like the the more traditional hard disks and older SSDs. Previous generation 3Gbps drives still offer considerable performance gains over hard disk drives, though, and as the industry has been taking note for the past couple of years, they’re pretty much the best upgrade you can invest in for improving all-around performance to your rig.

The OCZ Vertex 3 is a definitive example of why we can rely and praise OCZ products. While the price might scare some people, the overall benefits of the product far outweighs any cons that it may may — which is, at this juncture, just the price itself. With increased read and write RAID-like performance, SATA 6Gbps interface, a three-year warranty, and the OCZ name, one can’t go wrong with this SSD. It’s a piece of hardware that cements itself firmly in the constantly growing SSD market.