I have a certain soft spot for certain games that put having fun in the forefront and can deal with having a straight up “excuse plot”. In a nutshell this is what Orcs Must Die! entails. Orcs are attacking the rift, and it’s up to you as the last defender of said rifts to kill all the Orcs. That’s literally all there is to the story and that’s all that needs to be said.

Orcs Must Die! is another in the new popular genre-mashup of tower defense and action using traps in lieu of actual towers, and of course puts you in control of the main character, taking an active role on the battlefield. It’s also one of the funnest games I’ve played this year. Read on to see why it’s so rad. 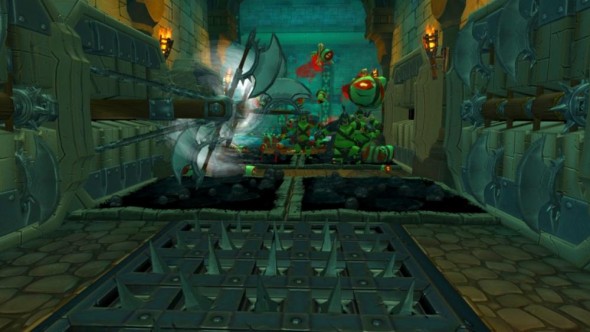 Lets get the obvious out of the way immediately, because I hate seeing reviews rely entirely on such things. Orcs Must Die will inevitably draw many comparisons to Trenched and to be fair that’s actually a very decent comparison. You could sell this to a fan of that game by calling it “Trenched in a fantasy setting” and be just about done. However a review that does not make, and Orcs Must Die does more than just copy the formula and change the graphics around.

One of Orcs Must Die‘s strongest points is that it keeps things simple in every possible way. Aside from your character there are a handful of things you need to focus on: the rift, it’s “health”, and the doors the orcs will be coming from. Each enemy that reaches the rift lowers its health, resulting in a loss if it gets too low. How you prevent this is up to you, and the funnest way to do this is with traps.

Traps are the towers of this “tower defense” hybrid, and will be how most of your killing is done. Traps all cost a certain amount of your points / currency to place and have limits on where they can be set, mostly differentiated between the floor wall and ceiling. You only start off with a handful of different traps and unlock more as you progress, as per usual with these sort of games. 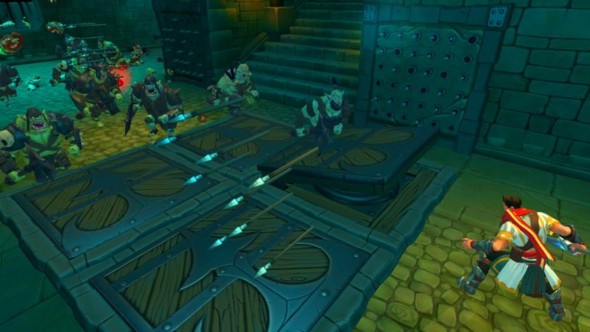 While it won’t be long before you find your own personal favorite combinations for orc slaughtering fun, another strong point in the games favor is that there’s no one way to ensure victory. Each time you unlock a new trap it might be a strong choice for the new level it came with, but success never hinges on finding the perfect setup for each level.

At the beginning of each level you have to equip the traps you want to use with a limited number of slots available, with more slots unlocking as you progress as well. One slot is locked to always have your crossbow equipped, which will likely be your personal weapon of choice though you also have a sword and a few magic spells to choose from as the game goes on.

Choose and set your traps, equip your weapon and “unleash the horde” and now it’s orc killing time! You can sit back and let your traps do the hard work, but each one has a cooldown time between attacks and unless you’re just some kind of brilliant prodigy at this game you’re going to have to do some work as well using your weapons of choice.

Variety is the spice of life, and as I said there’s not just one way to beat any given level: particularly when you come back after unlocking more traps later in the game. 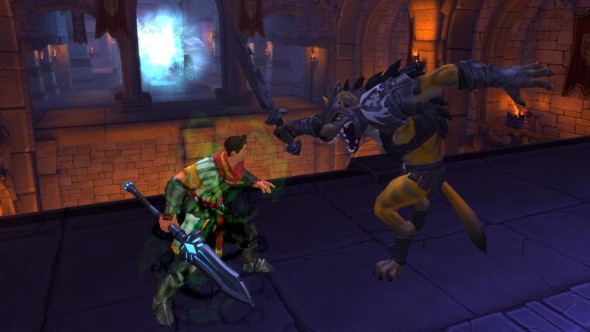 Of course some enemies will be immune to certain traps, and things aren’t always going to go your way. The game doesn’t do much to tell you this, but it’s not exactly hard to figure out and it won’t be too long before all you’ll need to know is what enemies will be in a level to know exactly how you want to set things up. Thankfully the game tells you this at the beginning of each level.

All of your traps and equipment can be upgraded using skulls, which are unlocked by completing levels. Each one has five skulls you can unlock which is of course not always the easiest thing to do. Skulls are taken away for allowing enemies to reach the rift among other things. It’s not exactly clear what takes skulls away, though one thing is clear: the better you do, the higher you score.

If you’re having trouble on a certain level there’s an easier difficulty setting you can play, though it only rewards you two skulls at the most. Choosing which trap/weapon you want to upgrade is again going to depend on your play style. Each one can only be upgraded once though so the decision won’t be too long, as there will be certain traps you just simply find yourself not using leaving the skulls for the ones you like. 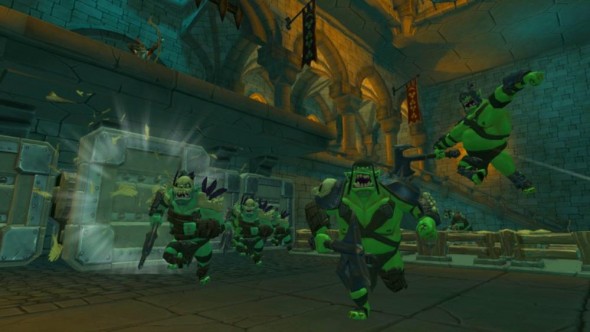 Orcs Must Die features a fairly long campaign with a pretty large number of levels with a LOT of different traps available. With an extra harder difficulty unlocked after completion of all the levels, there’s plenty of action here for everyone. Experimenting with different trap setups and placements is a lot of fun, and even after I already unlocked all five skulls in certain levels I found myself going back and trying with new traps just to see if I could get a better score, or just for fun.

A lot of games miss that lately: pure fun. There was no achievement or unlockable item motivating me to replay the Baths level five times with different traps, just fun. I spent one wave trying to kill as many orcs as possible by pushing them into the insta-kill poison. One was done trying to just use traps, and again using new large ceiling traps I got later. FOR FUN.

The game is stock full of orc slaying fun that I think everybody can get behind. With rock solid controls and a sharp sense of humor present throughout the entire experience, this is an absolutely wonderful experience that should not be missed. Trenched Getting Renamed to Iron Brigade, Finally Releasing in Europe New Trenched Dev Diary Takes You Behind the Lines

GDC 11: Next Double Fine Downloadable Title Has Been Announced