This latest version includes updated graphics, similar to the Phoenix Wright: Ace Attorney Trilogy HD released in iOS, as well as taking advantage of the 3DS’s stereoscopic 3D feature — meaning that the background, characters and text boxes sit on separate layers for more visual clarity and depth — and (similar to the DS version) also takes advantage of its dual screens for better exploration.

Including “Rise from the Ashes” which was introduced in the Nintendo DS release of the first game, each will feature about four to five action-packed cases for you to solve. When starting, it gives you the option to switch between the three titles freely. Of course, if this is the first time you’re playing the series, I recommend you start from the first game. 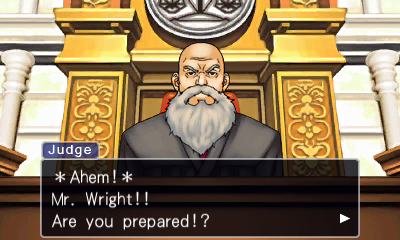 Your career (or Phoenix Wright’s career, rather) starts off with you defending Larry Butz, a woman-crazed and eccentric childhood friend of Phoenix Wright. Butz was accused of murdering his ex-girlfriend, but as his defense attorney, its your job to prove his innocence with the testimonies and evidence provided. Each case afterward follows a similar pattern of clearing your client’s name of murder through investigation and court trials.

You will be using your deductions skills to reach the correct verdict, so make sure you pay attention to every detail and study the evidence. Every case introduces a set of peculiar characters with great backstories which engrosses your attention as the story progresses. With just one case, you will witness an immense amount of character establishment and development, making most of them quite endearing.

Due to its dual screens, the 3DS version shares the same gameplay mechanics as the DS version. While you will be able use the system’s buttons to navigate through most of the menus, I do think the game is best played with the stylus.

During the court section, you must read a witness’s testimony given during court using the bottom screen and try to match it with the contradicting evidence simultaneously, then hit the “Objection!” button to present said evidence and move the trail along. Additionally, the game still lets you scream using the system’s mic when you need to press the witness or present an “Objection!” 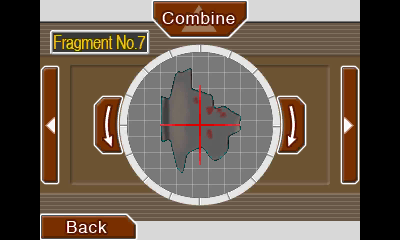 The special “Rise from the Ashes” case in the first game takes full advantage of the 3DS system. You will be able to search for wiped out bloodstains as well as search for fingerprints using Luminol Testing Fluid and Fingerprinting Set respectively. This case also gives you the option of a 360 degrees view of the evidence, which becomes crucial at multiple points of the case. It’s unfortunate that that other two games didn’t get an extra case like this one.

Outside of court, you must control Phoenix in first-person view and examine crime scenes to collect evidence, as well as speak to witnesses and Detective Gumshoe for more information on the case and on the crime. Any evidence collected in this section is saved in the Court Record and used in the aforementioned trial section.

Now that the introductions are done, let’s go through the changes, shall we?

The Ace Attorney Trilogy has received an intense amount of improvements, especially in the graphics department, but that’s to be expected as it was hand redrawn by the artists themselves. Throughout the game, you can really notice how much detail has gone to every portion, including the character sprites and backgrounds.

Looking at the character sprites, you realize how much more detailed it is and how much more vivid it looks compared to its original DS counterpart. While I’m not an overall fan of the 3D feature, I can appreciate how well it was used in this title. 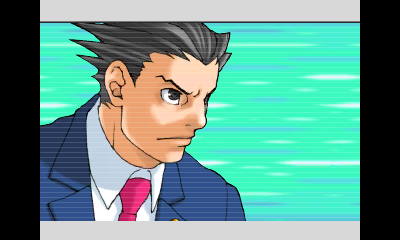 In addition to the visuals, the game’s sound effects and background music have been decompressed and remastered as well. When playing through the game, you will notice that the “Objections!” and other sound bites are louder and clearer. While the soundtrack remains the same, just like the sound effects, you can plug in your headphones and enjoy the music as it was intended. Alongside its great story, the soundtrack helps you immerse yourself even more in these cases. There were moments I left my 3DS idled just to appreciate the stunning music.

Its localization has also been improved greatly, with all typos removed and dialogue modified during trial testimonies to make the correct answer more apparent. Also, the miracle finally happened!

The game also features the full Japanese version of all three games. As someone who took intermediate Japanese classes, it was a great way for me to learn idioms, slang, legal terms, and natural-sounding Japanese as a whole. There’s nothing better than studying while playing through a great game, right?

I am truly pleased with the quality of Phoenix Wright: Ace Attorney Trilogy, from its gameplay mechanics to its remastered visuals, to its sound effects and soundtrack. This iteration is easily the best the franchise has received, and even if you recently played the DS or WiiWare ports of the games, I strongly recommend that you pick this up as it will offer a whole different experience for these classic three titles.

Phoenix Wright: Justice For All Moved Up