Review: The Amazing Spider-Man 2 – The Bastard Child of Forgotten Games

Review: The Amazing Spider-Man 2 – The Bastard Child of Forgotten Games

There’s something special about the release of a new game. You’ve heard about it for months, you’ve counted the days down until the developers release a trailer, and when they do, you just stand there in amazement. Even when a game isn’t high on your list, a new release overall makes you pretty darn happy.

When you finally get that new game, something magical happens; it’s a bond that can never be broken, it’s etched in your memory…forever. 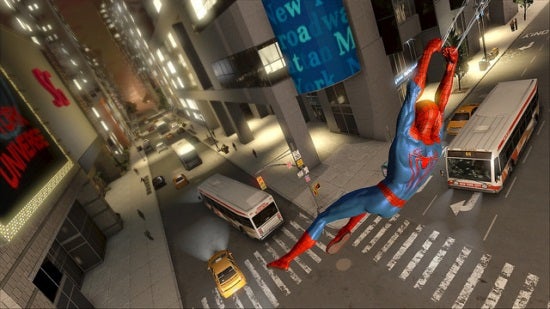 When I finally got my hands on The Amazing Spider-Man 2, I was like a kid in the candy store — wide-eyed, full of hopes and dreams. Nothing could take away this special moment. So I put that bad boy in my Xbox 360 and let it go.

As the hours became days, my smile of happiness slowly dissolved into tears of confusion and a lifetime of regret; I just did not understand what happened. It’s 2014. This is not supposed to happen.

The Amazing Spider-Man 2 starts off with disappointment from the beginning. When I first started the game, it took forever to load. I would compare it to waiting on lines at Comic-Con, dying of thirst and hunger but you know if you get off that line you’ll never make it to any of the panels you’ve waited for hours to see. Yes it’s that bad. Cue The Hunger Games’ whistle. However, if you happen to have the patience of a solider (Black Ops division) then you’ll discover the magical world of bad graphics and the overall feeling of emptiness as your childhood is destroyed before your very eyes.

Bad isn’t the proper assessment and for this I apologize. It’s as if none of the money was spent on graphics, to be “bad” would require somewhat of an effort. During my gameplay, I experienced Spider-Man fighting on the shoulders of a villain (unintentionally), fighting the air and most oddly right through opponents (watch out X-Men, Spider-Man’s coming for y0ur powers). There is absolutely no excuse for a game to glitch like the 90s in 2014. This took away from the experience of the game so much so I was brought to the brink of tears.

From the start of the game you’re thrown into the world of Manhattan on your own with basic combat moves, web-slinging abilities and your trusty camera to take pictures of crime scenes and bad guys in all its poorly designed glory.

Despite the atrocious graphics there seem to be some fleeting redeeming qualities; unfortunately this is just a facade. This game is heavily based in consequences. Complete a task and you’re rewarded with praise from the media; fail and you’re hated by the police and the public. You’ll start off as Peter Parker with the basic combat moves but this game treats you like a toddler so expect a lot of hand holding. It’s important to mention that everything is based on timed counters and since the game is glitched, timing was like losing your virginity — nothing was in-sync.

However, the more successful you are in combat the more you get to upgrade Spider-Man. Another positive is that unlike The Amazing Spider-Man, this sequel is visually brighter, which is very helpful when being chased by and defeating foes. It’s especially helpful when the game’s camera is unable to keep up with your moves and literally hinders you from completing certain tasks, like rescuing people from a burning building, because you can’t see what you’re doing.

As you web-sling across the city (which will take some mastering to do but happens to be one of my favorite non-glitchy part of the game) you’ll be able to perform some of Spider-Man’s rather impressive repertoire of three moves, as you conquer flying robots and rescue people from moving cars. You’ll also be able to climb on the sides of buildings and discover the joys of free-falling (make sure you take pictures).

While you’ll be swinging through the air and stopping crime, after about 30 minutes all the magic and newness of the game is sucked out like a black hole. What was once fun ends up becoming a repetitious chore. Everything and everyone starts to look the same. Unlike the Spider-Man that we know from previous games, this one has zero personality. The jokes aren’t funny, the person used to voice him is rather annoying and the storytelling is downright boring. Even Aunt May, and I love Aunt May.

Just as it appears no one cared about spending money on the graphics, no one cared about the execution of the game. In between each task, I had to wait what felt like an hour for the game to load — heaven forbid if I died for that would be another 10 minutes of just waiting.

The cutscenes were pointless and really didn’t tell you anything new about the story. The storytelling is downright clunky, and if you don’t complete a task accurately the police will loathe you and they don’t just loathe; they will hinder you from completing certain tasks. What’s worse is that it’s not entirely your fault you couldn’t complete the task the first time because you’re dealing with a game that reacts slowly despite requiring precision and a useless camera.

Speaking of storytelling, there’s a moment in the game that literally makes no sense. The game allows you play as Hero or a Foe and those who like to spice things up will mostly likely play as foe. The genius I thought the game was going to accomplish was the ability to show the ultimate consequence and chaos that would result from playing as Foe.

However, once again this was a letdown, for at the very end you’re forced to right your wrongs, mindlessly repairing the damage. What true villain sees the light? I’m betting the developers didn’t have the budget or just didn’t care to create an alternative ending. Instead of watching the world burn you’re punished by having to spend more tedious hours with this game.

While it’s very easy for me to blame the movie, since this is technically a tie-in game, I can’t even use that excuse. This game has absolutely nothing to do with the movie. It’s as if they skimmed the movie script and just put in random parts. For example Electro is randomly introduced as Max Dillon and then later you’re fighting him as Electro without any explanation whatsoever. On top of that Electro looks nothing like the movie version. Maybe he was confused and just walked into the game?

In all honesty The Amazing Spider-Man 2 should have never been released. It really doesn’t have anything going for it and while video games based off movies generally suck that’s simply no excuse. Spider-Man brings joy to the lives of everyone; he’s fun, nostalgic and full of life. Even with games I couldn’t stand, there was at least something I truly enjoyed that wasn’t ruined in less than 30 minutes. This was like watching a dying animal in pain, waiting to expire.

Where’s the inspiration? The time and care for the love of gaming and gamers? The disaster that was NBA Live 14’ should have been a warning for all developers.  Or maybe, just maybe, Spider-Man games are dead. There’s nothing left to say. The Amazing Spider-Man 2 should be buried next to Uncle Ben, never to be resurrected again.

Insomniac confirmed that suit from the The Amazing Spider-Man films is not coming to Marvel's Spider-Man and nothing of value was lost.

The Evolution of Spider-Man in Gaming: Swinging In and Out of the Gaming Scene

Want to See The Amazing Spider-Man 2 for 3DS in Action? Check Out This Walkthrough Footage