2012 has turned out to be a banner year for comic book films. Four have been released so far, three of which were a big deal. It started on May 4th with The Avengers, the highly anticipated culmination of the universe that Marvel Studios constructed over the past four years. The month of July saw the release of two more films, the most recent of which was The Dark Knight Rises, released on July 20th, a film which will mostly likely gross billions upon billions of dollars.

The Amazing Spider-Man was conceived after the abrupt departure of the director, Sam Raimi, and lead actor, Tobey Maguire, in the midst Spider-Man 4’s pre-production. This new film functioned as a reboot of the franchise. It was directed by Marc Webb (500 Days of Summer) and starred Andrew Garfield (Never Let Me Go) in the title role, along with Emma Stone (Easy A) who portrayed the love interest of Gwen Stacy. Out of all the comic book films that have been made in the last ten years, none have had a video game tie-in so widely accepted as the Spider-Man adaptations – the most popular of which was Spider-Man 2. 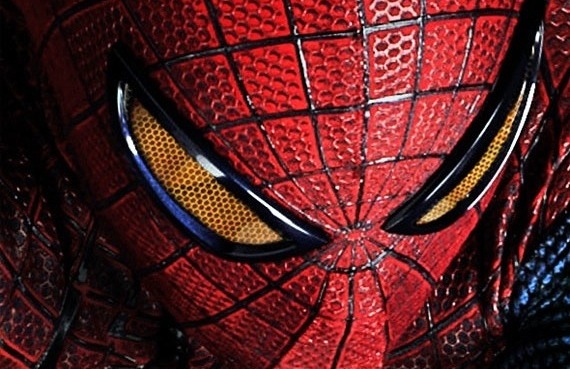 The Amazing Spider-Man was released for the PlayStation 3, Xbox 360, and Nintendo’s Wii, 3DS, and DS systems. An Android and iOS release followed two days later, and a PC release is scheduled for August 10th. It was the only film out of the three major releases this year to have a true adaptation.

While The Amazing Spider-Man video game shares the same name as the film, it is not a direct adaptation of what happened in the film. The video game’s story is a continuation, set very shortly after the events of the film, with many of the same characters and plotlines being used. The characters of Peter Parker/Spider-Man and Gwen Stacy are reintroduced in the aftermath of the Lizard’s attack on New York City. Curt Connor’s – the man behind the Lizard – former employer, Oscorp, has gone through great lengths to destroy any and all remains of his research. However, an accident in the facility causes all of Connor’s experiments to be released into the city, where they wreak havoc and spread contagion indiscriminately. 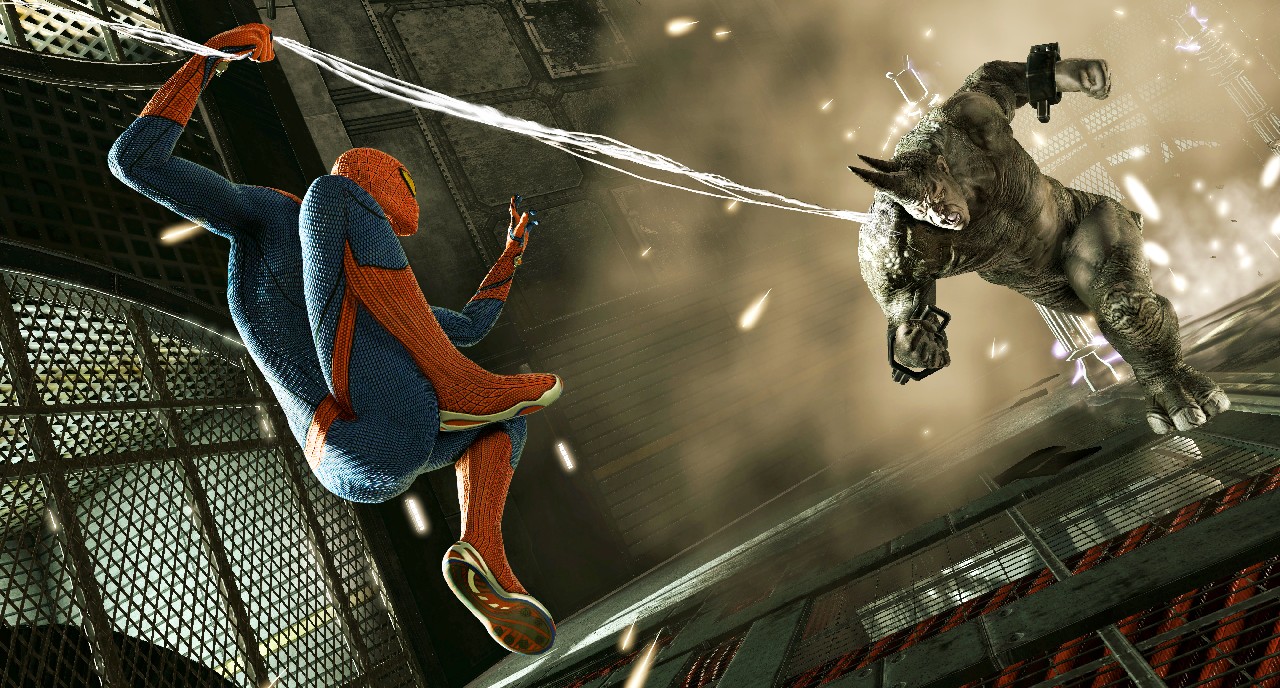 Prominent members of Spider-Man’s rogue gallery are the creatures that are part of the breakout at Oscorp. The Lizard functions more as an anti-hero and less as a primary antagonist, thus distancing the character from sharing any similarities with Rhys Ifans’ portrayal of the character in the recent film. The villains used include Scorpion, Vermin, Iguana, and Rhino. Felicia Hardy also makes a brief appearance. The villains were possibly one of the lowest points of the game. There was a degree of overlap due to each of them sharing the trait of being derivatives of some type of animal. What worse was that each character had their personality and background completely stripped, and there was no dialogue between them and the webhead. Aside from the differences of their powers, the villains were reduced mindless bruiting animals with equally uninspired boss battles to boot. Curt Connors/The Lizard was the only interesting ‘villain,’ as the doctor grappled with wanting forgiveness for his actions in the film, and his struggle with trying to control the Lizard.

None of the cast from the film lent their voices to the game. Peter Parker/Spider-Man is voiced by Sam Riegel, Gwen Stacy is voiced by Kari Wahlgren, and Steven Blum voiced Curt Connors/The Lizard. Bruce Campbell and Stan Lee also had cameo appearances in smaller roles; Nolan North was also a part of the game in a major role, lending his voice to the character of Alistaire Smythe. The voice-acting in the game was hit-or-miss most of the time. The interactions between Gwen and Spider-Man were enjoyable for the most part and there was some noticeable chemistry between the two. Riegel’s portrayal of Spider-Man was a good mix of humor, camp, and seriousness, very much akin to what we saw from Andrew Garfield in the film. Steven Blum seemed to be doing his best Rhys Ifans impression.

The game’s combat was another aspect that I had a love-hate relationship with. The Batman Arkham series, developed by Rocksteady, essentially set the standard for super-hero games. Free-flow combat with added combos and counters against hordes of enemies proved to the best for video games based on comic book characters due to how well that particular style of play emulated the comic books. The influence of Batman: Arkham City and its predecessor was very obvious when playing The Amazing Spider-Man, as the fighting system were nearly identical. The combat in and of itself was a treat to take part in, Beenox identified the strengths of Spider-Man and defined the combat around those attributes. He is fast, and very theatrical and acrobatic; additionally, his web-shooters play a huge factor in his more devastating combos, with no need for any complicated input on the part of the player. The combat system shines in many of the fights that Spider-Man had with his mechanized enemies among the streets of Manhattan. Not only did these fights use the speed of the character to their maximum, they also incorporated the city in very interesting ways. 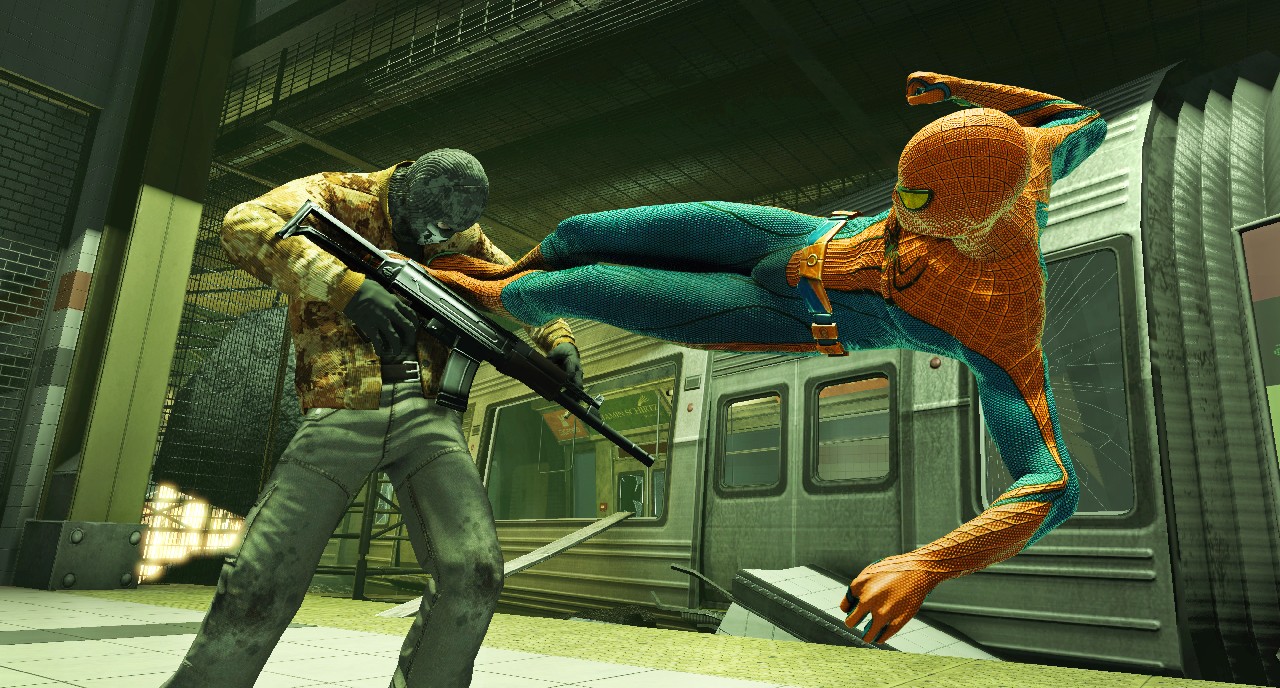 The speed, however, was not complimented by the game’s visuals. The player can execute countless combos and devastating finishing moves, but the visuals do not adequately convey any sense of precision and finesse. Unfortunately, the game seemed to be moving too fast for its own good. A lot of the visuals in the middle of fights reminded me of what a stop-motion film would look like if it were on fast forward…King Kong (1933) versus the T-Rex for example.

The open world of Manhattan is possibly the most stunning aspect of the game, it is one of the most creative and expansive interpretations of the city of New York that I have seen in a long time. Much like Spider-Man 2 (2004) and Ultimate Spider-Man, the open world is confined solely to the island of Manhattan (though Ultimate incorporated Queens as well). This was a bit disappointing, given that Rockstar Games proved with Grand Theft Auto IV in 2008 that it was possible to develop a game that encompassed four out of the five boroughs, with an added slice of New Jersey. However, I would attribute the small scale of Manhattan to the fact that while the city itself is beautiful, there is not much to do in in it, and subsequently no incentive to go swinging around it. 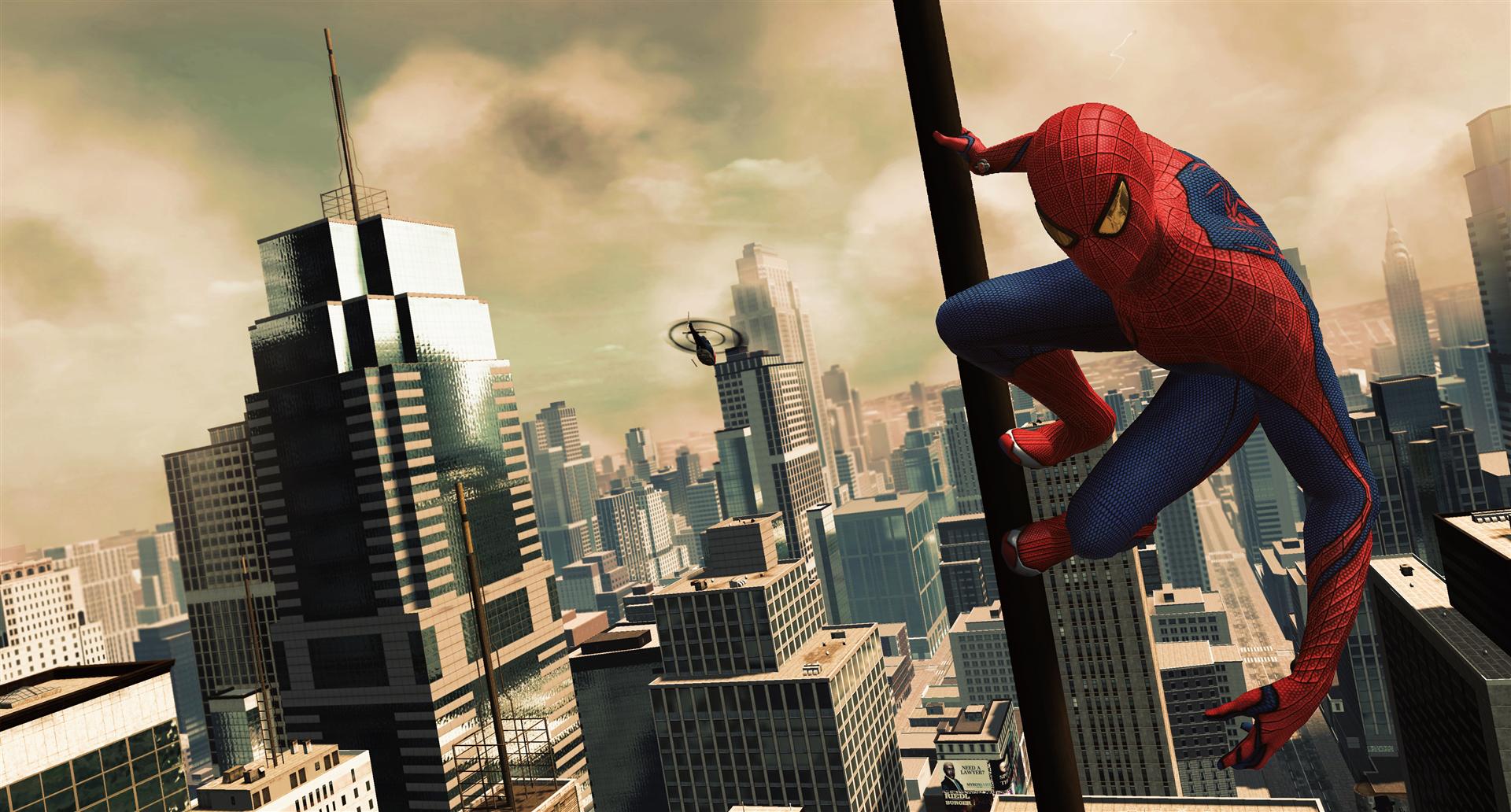 There is a plethora of side-missions and small quests that the player can partake in when they are not engaged in the main story. Fortunately, there is no little kid screaming (a la Spider-Man 2) for his lost balloon on the corner of every block. The challenges in Manhattan range from speed-runs through the city, to taking care of petty crimes. The line between exciting and mundane is easy to cross though, as the dialogue and scenarios are simply too invariable; after a few go-arounds, the game’s side-challenges did not seem so fresh, or otherwise appealing.

Fans of both The Amazing Spider-Man film and the character itself will most likely have a fun time with this game. I do not want to downplay the fact that while I did have qualms with the title myself, I had a fun time overall and was blown away by the quality of a movie tie-in – given the stigma that such titles carry. Despite the shortcomings of the combat, it is an overall solid experience. The story is not an epic in any way, shape, or form; and it is best to go in thinking of it more as a glorified epilogue. What is more important is that Beenox displayed that they have a true passion and understanding of the Spider-Man character. I have not played the developer’s other Spider-Man titles, but if The Amazing Spider-Man is indicative of what they hold in store, then I plan on picking them up soon. Insomniac confirmed that suit from the The Amazing Spider-Man films is not coming to Marvel's Spider-Man and nothing of value was lost. The Evolution of Spider-Man in Gaming: Swinging In and Out of the Gaming Scene