Review: The Binding of Isaac Review: The Binding of Isaac

When Super Meat Boy was released last year it instantly put Team Meat on the map in a way I don’t think even they were prepared for. While the team is currently working on their second full title together, Edmund McMillen (half of the team) has been working on a side project with Florianl Himsl and Danny B called The Binding of Isaac. As the pieces started to come together it was very clear that while this may share a similar look with Super Meat Boy this is an entirely different game. I literally had to force myself to stop playing this game to write this review, so let’s get this thing started so I can get back to playing. 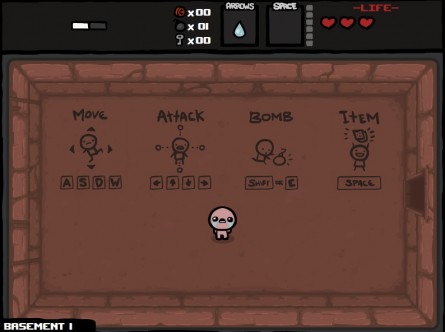 The Binding of Isaac will instantly look familiar to many people and I can already hear you shouting The Legend of Zelda at your monitor and to be honest you’re not that far off. The map layout as well as the gameplay is certainly very reminiscent of the original Zelda game, but with an interesting twist. Everything in The Binding of Isaac is randomly generated each time you play the game, much like you would see in a Roguelike game.

Roguelikes have a particular reputation for being insanely hard and are usually kind of difficult to get into. I don’t know if it’s the clean graphics or the result of being an action game hybrid, but The Binding of Isaac feels very accessible from the get-go, although it’s a little deceptive. Things will start out pretty smoothly as you dash from room to room completing challenges and beating enemies with ease.

It’s not long before the game lives up to that reputation though, in a good way. 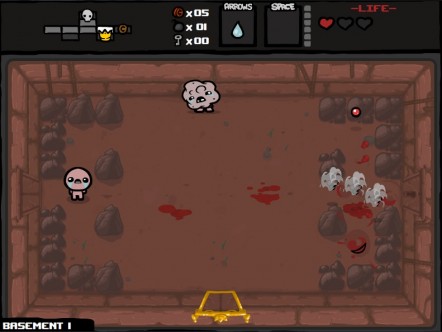 The titular Isaac battles enemies by shooting his tears at them, dropping bombs or using various special attacks which are equipped by picking up items around the world. His tears can be upgraded to shoot further, stronger or faster in addition to other powerups that turn them into a homing attack or make them chargeable for more power.

Each item you equip actually changes the appearance of Isaac which is really awesome, and while it’s neat to see him wear the goggles that turn his eyes into lasers or get a fuse in his head after picking up a large bomb powerup it’s a little distrubing to see him equip items like his mom’s panties or high heels, or equip “mom’s pad” as a weapon.

The Binding of Isaac is THAT kind of game, where the bizarre and ridiculous is commonplace. 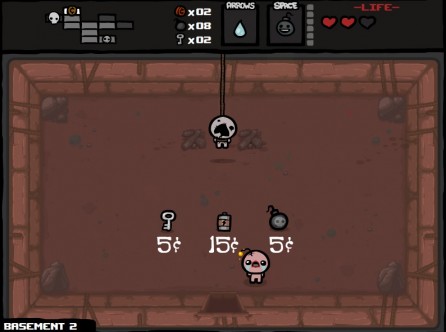 When I say everything in The Binding of Isaac is randomly generated I do mean EVERYTHING. The maps, the powerups, the boss fights, even some of the enemies can alternate between a few different versions of themselves. This makes every playthrough a unique experience, and every death a horrible loss. While it sucks to get extremely far with an awesome set of powerups only to be killed by a fly that you accidentally ran into, that’s half the fun!

Each map has a set number of “required” rooms that will appear including a boss (the exit), a treasure room, a secret room and a shop that again will look instantly familiar. Nods to The Legend of Zelda aren’t the only homages you’ll find around the game and while I don’t want to spoil anything for you lets just say you’ll be running into some of your favorite (and most hated) memes from around the internet among other things.

I can’t stress enough how awesome the randomly generated content is and how much it adds towards my enjoyment of the game. In my latest run through of the game I found an item which revealed all the secret rooms to me, but was killed when I used a pill that made me randomly drop bombs for a few seconds and I got trapped in a corner. 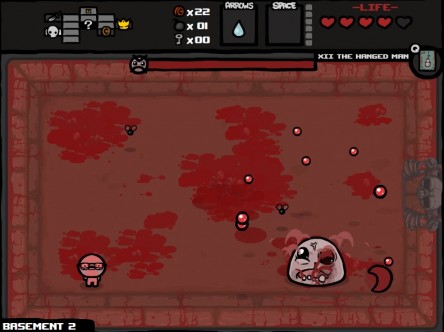 Of course with the game being randomly generated comes a small detriment in that things don’t always spawn in a sensible way. Some rooms will contain a treasure chest that’s on a floating rock in the middle of a chasm that is inaccessible. Perhaps there’s an item that lets you get these out of reach collectibles, but if there is I haven’t come across it yet. Of course with all the time I’ve spent on the game I’ve barely scratched the surface. (Note: After playing more I did find an item that lets you walk over gaps.)

While The Binding of Isaac is difficult, it never feels unfair or hard for the sake of difficulty. While things can get overwhelming and the luck of the draw might leave you without any truly beneficial items, bombs or keys for awhile I feel that once again this just adds to the fun of the overall experience.

Each death forces you to start completely over from the beginning losing all progress and items which may turn some gamers off but I can see even more of you salivating at the thought. Once again this just added to the excitement for me, knowing that I NEED to find a life powerup or else I have to start from nothing again. 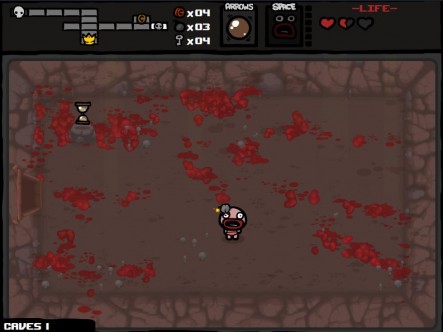 There is a story being told here through the initial opening cinematic and briefer ones between the levels. While it’s not the absolute focus of the game it does go a way to explain some of the odd things you’re encountering and gives some insight as to why everything you encounter is trying to kill you.

One of the first things I’m sure you noticed is the depraved art of Edmund McMillen once again breathing life into a selection of horrible little monsters that makes me afraid of what this man’s dreams must be like. But so long as this kind of quality work keeps being the result I’m OK with him having a few restless nights (sorry Edmund!).

The music by Danny B is once again one of the key driving forces behind the game. While in Super Meat Boy things were more upbeat and generally felt like “video game” music, the songs here are a chaotic driving force that fits right in with the nightmare world going on around you at all times. I occasionally had to pause the game to take care of something and found myself still nodding along to the music in the background. 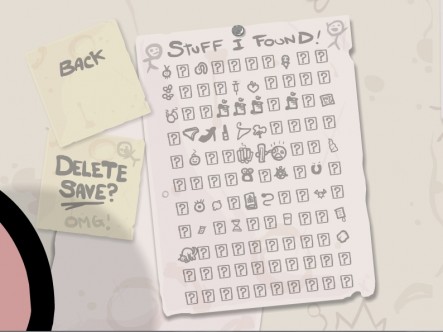 Let me restate this one more time for emphasis: The Binding of Isaac is a hard game. But it’s also insanely addictive. I wasn’t kidding when I said I had to force myself to stop to write this, and as soon as I finish I’m going back to try and make it all the way through just one more time.

The Binding of Isaac might not be for everybody. If you came here expecting Super Meat Boy: Adventure be very aware of the fact that this is not even REMOTELY close to what you’re getting. However, don’t go anywhere because what we have here is another shocking surprise that I feel everybody is going to be talking about for a long time to come. The Binding of Isaac is absolutely not to be missed by anybody. Binding of Isaac’s Randomness is Sexy, and So Can You Danny B Re-Doing Soundtrack for Binding of Isaac Expansion The Binding of Isaac Halloween Update is Now Live and Free The Binding of Isaac: Wrath of the Lamb Release Date Announced

Pay What You Want for The Binding of Isaac OST, Available Now

Is Danny B Doing the Music for Cave Story 3DS?