Review: Wooden Sen’SeY Is a Boring and Forgettable Experience Review: Wooden Sen’SeY Is a Boring and Forgettable Experience

The indie title Wooden Sen’SeY is about a hero named Goro who walks out of his house to have a drink, and shortly after bad guys come through with a weird looking ship and steal all of his drinks…and that’s it really. After that, you’re dropped right the game with preamble.

The overall controls for the Wii U GamePad are pretty awkward at first because naturally, when I play a 2D game I would want to use the D-pad. I couldn’t figure out how to change the controls to my liking so I was stuck with the analog controls. Analog doesn’t really take long to get used to but having the option to mess with the controls would of made this game slightly less frustrating. Just slightly.

I also had to turn off the motion control gimmick that allowed you to do this sort of attack/double jump because I had to tilt my GamePad in order to execute the move and it only made the game more frustrating. The grappling is also a pain to use and I frankly try to avoid the mechanic as much as possible because of how wonky it is. 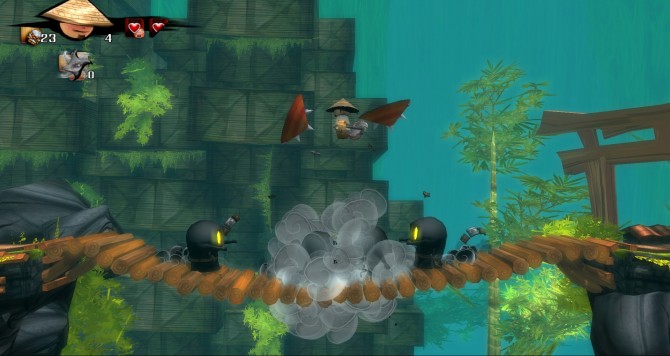 Speaking of controls, I was also really disappointed to see that Goro didn’t really have any combos. You just press Y button for him to swing his axe, with the option to also use your grapple axe to hit enemies above you. It all got dull a little too quickly though. Sure you can get items along the way, like shuriken and bombs, but it wasn’t enough to keep me interested.

The game can go from easy to difficult rather fast and you’ll end up dying a lot in some levels. Not that I don’t like hard games, but when the game itself isn’t fun, it really doesn’t make the experience any better for me. If you want to really test your patience then the Time Attack and “Dev-Time” challenge mode (the latter which has you try and beat the developers’ record) is made for you. 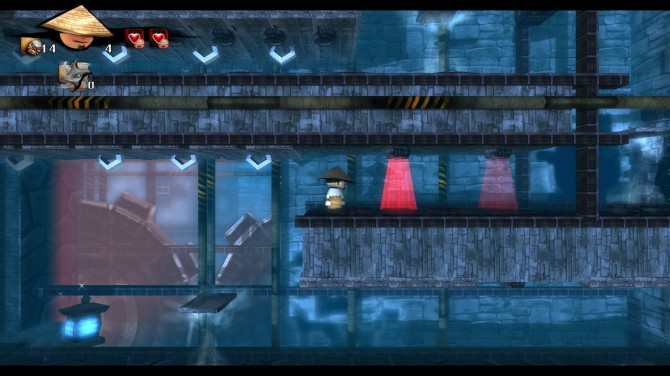 Although the game has its faults, the music was pretty decent. As I was going through the levels, the soundtrack never really felt out of place. I also enjoyed the stage backgrounds the game had to offer but the enemies that accompanied the stages were pretty bland. As for the graphics, all I can really say about it is that they aren’t bad but they aren’t really that impressive.

Overall Wooden Sen’SeY is so boring that it is almost painful. I can’t really recommend this game to anyone sadly but if you’re crazy for platformers then wait for a price drop.