Sceptile May Be Coming to Pokkén Tournament Sceptile May Be Coming to Pokkén Tournament

Last week it was announced that a new fighter and two new support Pokémon would be revealed for Pokkén Tournament this Thursday.

However, a new supposedly leaked photo of Pokénchi presenter Shoko Nakagawa playing the game with a sign in the back showcasing Sceptile as a playable character as well as Electrode and Farfetch’d as support Pokémon: 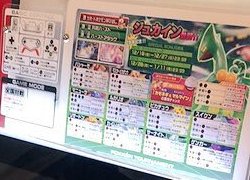 We’ll have to wait until Thursday before this is confirmed, although chances of this being true are decent considering how well Sceptile would fit into the game.