Richard Garriott, the legendary Lord British from the Ultima series, is back with Shroud of the Avatar, that will feel very familiar to the fans, and yet new.

Today legendary Ultima creator Richard Garriott and his team at Portalarium finally brought a five-year-long journey to fruition with the release of Shroud of the Avatar: Forsaken Virtues.

In order to know more about the game, I had a chat with Garriott himself, who also showed me the really impressive improvements the game received over the past several months.

Shroud of the Avatar is the spiritual successor of all things Ultima, with a complex story based on the virtues, deeply interconnected roles like Ultima Online did, and a detailed world simulation.

The world itself has a day/night cycle, movements of the starts, and orbiting moons. The alignment of those moons with the constellations actually creates gameplay, so learning the astronomy of the world is relevant.

The game has evolved massively in its visuals compared to what we saw in early footage. According to Garriott, this is due to the fact that the first 80% of the game is made of creating systems. Only during the final 20% of development, those systems are connected and the true quality of the title really gets exposed. 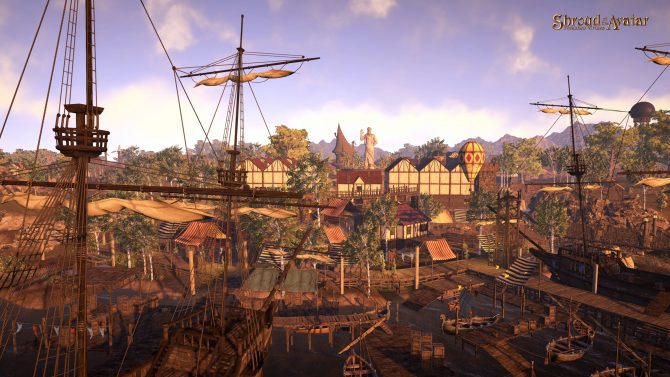 During his career, he learned that games that he was pressured to ship early had trouble launching. Games that he could take his time to finish right, have all done very well. The team at Portalarium feels very comfortable with having given Shroud of the Avatar all the time that it needed, and they’re proud of showing the results.

One of the most relevant features of the game is what the team calls “selective multiplayer.” Players can enjoy the game fully offline as a solo experience, which feels a lot like Utlima IV through VII. They can opt to play online but still solo, granting the ability to see the creations by other players in the world. Party-level play lets you enjoy the game with your friends only, while open online is the mode most similar to an MMORPG.

The map is broken up into a number of separate sub-areas, which allows transition between solo play and multiplayer at will. This also enables developers to create special events in which, for instance, the player gets to meet a king without seeing a bunch of others waiting in line as well.

If an area is overcrowded it can also be temporarily duplicated, but everyone playing online is on the same server without the need of separate shards. 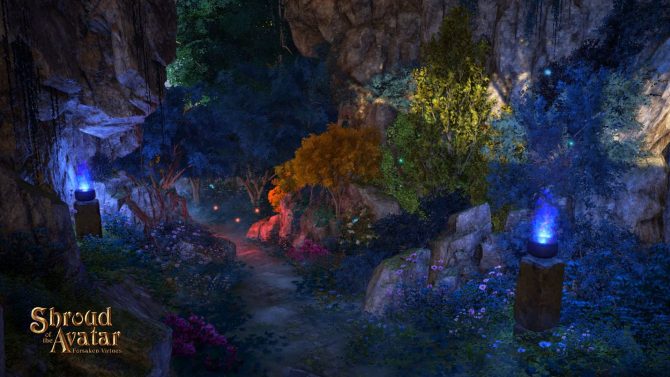 Players can use an astrolabe item to show the shapes of the constellations in the sky. There are also various orbital bodies, and their relative position is important to the gameplay.

For instance, the alignment of a moon with a constellation can drive an NPC army of cabalists to attack a player-controlled town on the map.

Just yesterday night, a massive comet impacted with the game’s planet, destroying an entire map. For launch, it has been turned into an area devastated by the meteor. Interestingly, the giant chasm created by the comet opened up a series of underground chambers in which an ancient evil was sealed.

Housing is extremely advanced, with tons of different kinds of furniture. This can include tools that track the precise position of moons and constellations (which is useful for hunting down the cabalists mentioned above), and record players that can play wax cylinders with music created by the players. 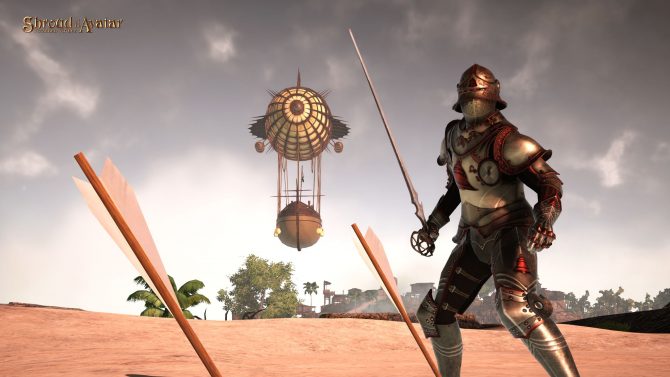 Players can also band together to build and control towns, and those that are most active and developed show as such on the world map, creating handy hubs of activity for others to visit.

Garriott mentioned that the way games are made and distributed today is very different than back in the times of Ultima, and it continues evolving. Creating Shroud of the Avatar as a crowdsourced, crowdfunded, open development process has some really interesting strengths and some “scary bits.”

Players aren’t used to seeing games being developed from behind the scenes. On one hand, they get to see and participate in the whole process, and for some, there is no greater joy than to be along for the whole ride. Yet, on the other hand, some are surprised by the fact that a game in development has elements that don’t work correctly.

While that has made the development process a “really interesting ride,” Garriott feels that it has kept the team “extremely disciplined,” releasing updates every single month on time. For 52 months in a row, they launched patches timely with zero unscheduled downtime. According to Garriott, this probably never happened before in any other game. 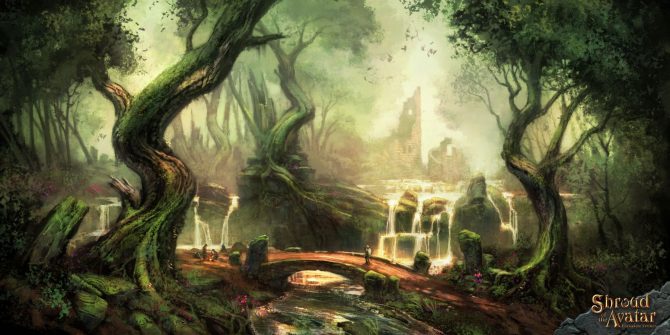 I also asked him whether the team at Portalarium is considering to expand beyond the realm of PC gaming.

Garriott mentioned that they “absolutely” thought about it, and one of the reasons why they selected Unity as a development engine is that it makes expanding to other platforms easy.

When development started the Nintendo Switch did not exist yet, but the original target was to put the game on a handheld platform, which at that time could have been an iPad-style tablet.

Yet, now that the Switch is available, according to Garriott that’s probably “an even better next target” for the game. 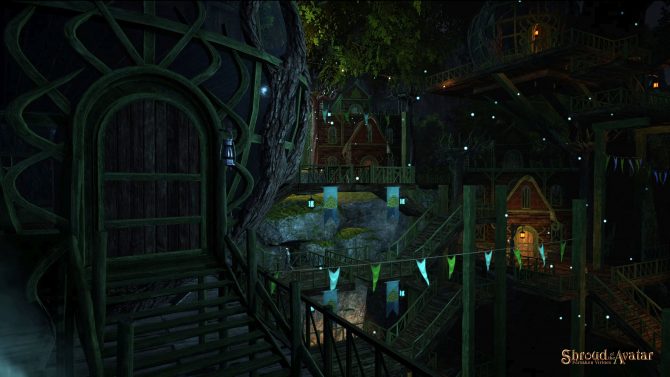 Every year or so the good folks at Portalarium test recompiling the game on a variety of other platforms just to make sure that it works and that they have not implemented development decisions that would make porting difficult.

Garriott also mentioned that after the release on PC, Mac, and Linux, the development team will “quickly” pick what platform will be next.

Looking at his past experiences, he worked on many platforms and many ports. Some have done well, while some haven’t, but the ports that didn’t perform too well were those that were just shoveled on more platforms, as opposed to proper redesigns to fit specific features and controls.

That’s why Portalarium wants to make sure that the game is redesigned specifically for the target platform. That process will take a bit of time, and for now, the team doesn’t even have a speculative schedule. Yet, they do believe that they should port the game beyond PC, and the most interesting perspective at the moment is a platform that involves mobility. 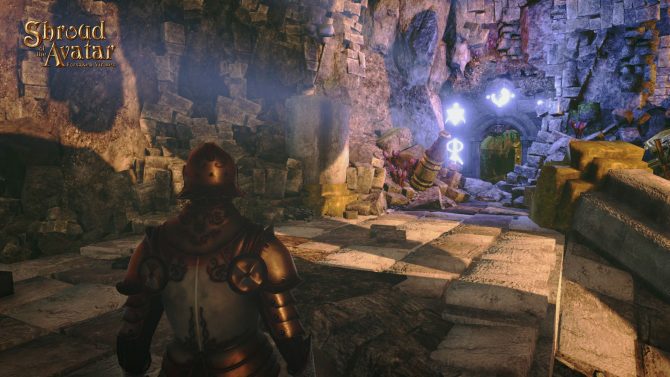 After launch, the team plans to keep up with the monthly updates as long as the game runs. They will keep upgrading Shroud of the Avatar indefinitely, but there will be bigger releases approximately every year, called “Episodes.”

Portalarium is already preparing the feature list for Episode 2, and eventually, players will be able to do things like flying around in their own airships. New schools of magic will be implemented alongside new continents and stories.

There are five episodes planned for the next five years, and they’re basically like expansions. The story will get deeper, and the world will get bigger.

Speaking of story, it’s co-written by Dragonlance author Tracy Hickmann. He and Garriott met for the first time at the first DragonCon about 35 years ago. The two have talked for a while about collaborating, and their first time was the script that Garrott used to film a video during his space flight, written by Hickmann himself. You can watch it below.

Interestingly, Garriott revealed that this video won him his wife.

Speaking of memories, we learned that Lord British was always played by Garriott himself in Ultima Online, and the same will happen in Shroud of the Avatar: Lord British will be in the game only when he is personally online.

The moment in which Garriott left Electronic Arts is also the moment in which Lord British left Ultima Online. Sometimes he still appears in his old world, and that’s because the current development team asked for his presence for an event. They simply call Garriott and he is happy to show up since the game is still near and dear to his heart.

Shroud of the Avatar also includes plenty of live events, both organized by developers and by the players themselves. For instance, every time there is a monthly update the community organizes a dance party, with Lord British and the developers themselves always showing up. 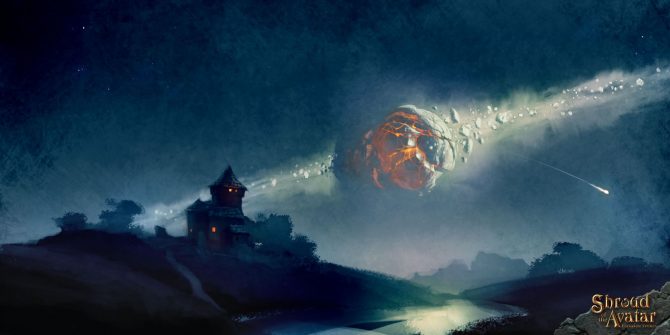 According to Garriott, what sets this game apart from the rest is a deep and personal story about the virtues, the deeply interactive world (which had the set goal to meet or beat the standard set by Ultima VII), the interactions and dependencies between players like in Ultima Online, and the selective multiplayer mentioned above.

There is good news for roleplayers as well. Garriott pledged to deeply support emergent behavior. Giving players the ability to create their own quests and stories is only part of the issue. Strong support for player-created content normally ends up generating a lot of half-finished, uninteresting junk scattered around the world.

The reason for that is that most players aren’t good storytellers or world designers. Shroud of the Avatar doesn’t just grant players the tools to create their own content, but it also gives them the responsibility to upkeep it. This means that if a player abandons an unfinished piece of content, it will disappear.

On the other hand, the game has ways to advertise player-created content that is good and visited regularly. Of course, players can also make sure that their creations transcend their presence in the game and developers are even willing to help to make sure that truly great work is preserved.

One thing is for sure: while Richard Garriott is best known  as the legend who kickstarted computer RPGs in the west, what I have seen and heard from him of Shroud of the Avatar: Forsaken Virtues tells me that he has a lot more to say and to show about the genre.

Whether this game will be a success or not, only time will tell, but for someone like me who grew up with Ultima and Ultima Online, it sure feels like home.

If you want to see what it looks like, you can enjoy some recent trailers. Shroud of the Avatar: Forsaken Virtues released today for PC, Mac, and Linux. Richard Garriott Might Release Shroud of The Avatar on Other Platforms; Switch Is a Possibility

Shroud of the Avatar will release on March 27th on PC, Mac, and Linux, but the developer is interested in future ports, possibly on Nintendo Switch. Richard Garriot Comes Back With New Kickstarter for Shroud of the Avatar: Forsaken Virtues