Sony Computer Entertainment Worldwide Studios President Shuhei Yoshida is one of the most visible among PlayStation’s executives, and he predicts a great year for the PS4, as he menyioned during a livestreamed Winter Special event in Tokyo hosted by the Japanese magazine Dengeki PlayStation.

Yoshida-san mentioned that next year will be “amazing.” According to him there are so many games coming that it’s hard to find time to introduce them all. It’s also difficult to decide which title to announce at which event, even because E3, Paris Games Week, Tokyo Game Show and PlayStation Experience are all handled by different people at the company.

While Yoshida-san would like to always announce a variety of titles, the task is also made harder by shifting production times, that said, he likes to try to get the information out as much as possible, even to encourage the games’ development teams.

He also mentioned that Japanese titles like Ni No Kuni II: Revenant Kingdom, Rez Infinite, Ace Combat 7 and Final Fantasy VII Remake are gathering attention overseas, and they’re expected to sell well even out of Japan, which in turn provides a driving force to create games in Japan.

He followed by introducing the following titles for PS4 as the highlights of next year (even if the list is by no means complete), and a list of upcoming PlayStation VR titles (not explicitly limited to 2016). 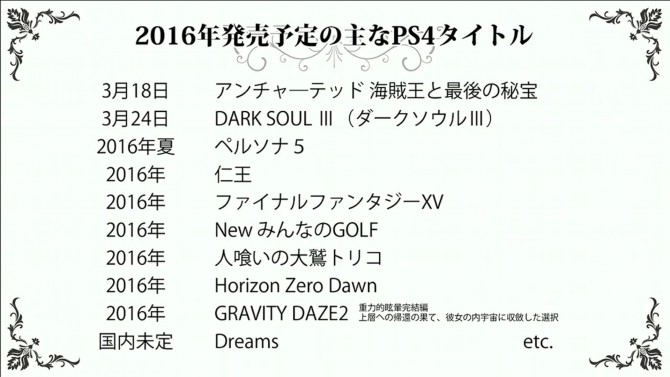 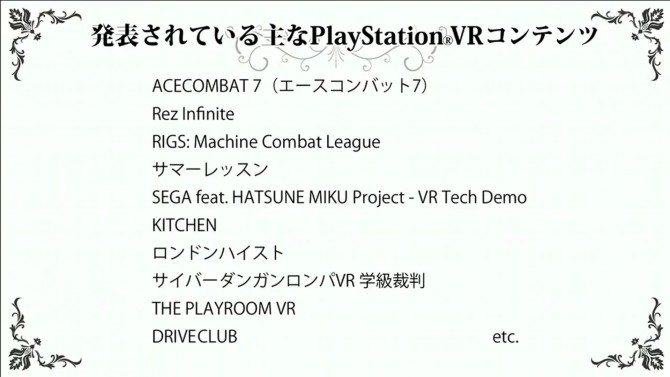 Since most of you can’t read moon runes, here’s the translated list of PS4 games:

Incidentally, while it wasn’t in the slide, he also mentioned Gran Turismo Sport.

Lastly, Yoshida-san promised that the PS4 will continue to evolve in the future, and that more and more new features will be introduced.

Incidentally, want to know what’s Shuhei Yoshida’s favorite candy? It’s Kororo gummies by Uha. Check him out as he waxes poetic on the sweet and chewy gummies. How can you not love this man?

Just for kicks, check out the Kororo commercial below. If it reminds you of the first mission of the first and unforgivable Tenchu, you definitely aren’t wrong.