Sony Expects to Sell More PS4 in FY 2016 than in FY 2015; Kumamoto Earthquake Might Impact Supply Sony Expects to Sell More PS4 in FY 2016 than in FY 2015; Kumamoto Earthquake Might Impact Supply

During Sony’s financial conference call for Japanese investors and analysts, Chief Financial Officer Kenichiro Yoshida shared a rough forecast for the performance of the Game & Network segment of the company’s business in the current fiscal year (ending on March 31st, 2017), which includes consoles and the PlaytStation Network.

“For the fiscal year 2016’s outlook, we expect the strong momentum of the PS4 platform to continue. Due to the impact of the earthquakes there is a possibility that the supply of components from certain vendors might be affected, but even with that impact, at this point of time, we think that in fiscal ’16 we can exceed the 17.7 million units of PS4 hardware that we sold in the previous fiscal year.

Currently we are considering a variety of ways to minimize the impact of the earthquake on the results of this business.”

Yoshida-san explained that three of Sony’s semiconductor production plants in Kyushu affected by the Kumamoto earthquake on April 16th were temporarily closed afterwards. Two (Oita and Nagasaki) have already resumed operations, but the one in Kumamoto was very close to the epicenter, and is still inactive while damage is being assessed, since Sony is prioritizing the safety of its employees.

Yoshida-san promised a full forecast for the segment on May 24th. He also showcased a chart displaying the meteoric increase in network sales since the launch of PlayStation 4. 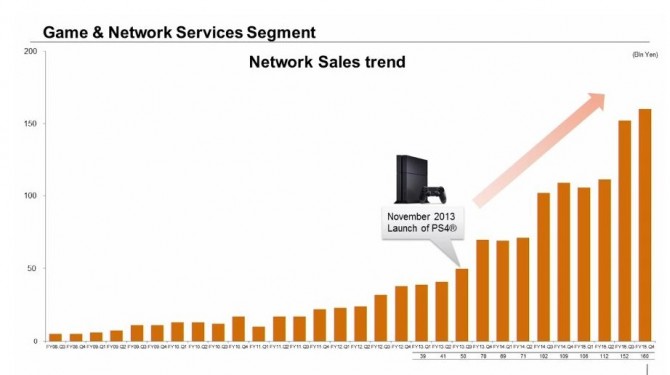