Today the Computer Entertainment Supplier’s Association, that organizes Tokyo Game Show every year, announced the winning games of the Japan Game Awards, that was held at the show.

Nintendo’s Splatoon won the overall prize, with Call of Duty: Black Ops III getting the crown among foreign games. You can find the full list below. 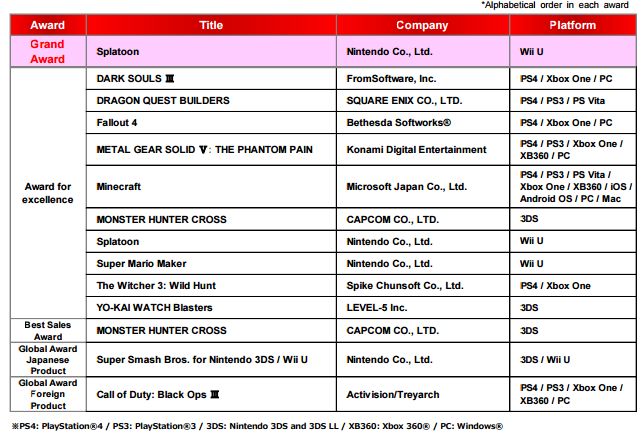 The reasons behind Splatoon’s victory are as follows.

With overwhelming support, the 2016 Grand Award goes to Splatoon！

“Splatoon” by Nintendo Co., Ltd. is a game that excites many players, regardless of their age, with its straightforward rules, in-depth gameplay, unique POP colored graphics and the excitement of the 4-versus-4 multiplayer matches.

With equipment and stages added through ongoing updates and in-game events, the fun doubles even after its launch.

A lot of comments included “my family is addicted”, “most interesting”.

As a completely new shooting game that brought about a big movement and with overwhelming support from numerous players, this game won the Grand Award of the “Games of the Year Division” of Japan Games Award 2016.