Sungazer Software is bringing their 32bit inspired, turn-based RPG, The Tenth Line, to the PS4 on June 27th for $12.99 USD.

Newcomer devs Sungazer Software were recently given a chance to talk about their upcoming indie game on PlayStation’s US blog. The Tenth Line is a turn-based RPG that’s heavily inspired by 32-bit classics with elements of Super Mario RPG sprinkled in. While the game launched on Steam back in March, the PS4 version will be the first console release. In a few days, June 27th to be exact, gamers will be able to pick it up from the PS store for $12.99 USD. And until July 4th, PS Plus subscribers get an extra 20% off.

The game is set in the Kingdom of Easania, located in a fantasy land where death cults, royal assassinations, and world-ending prophecies are all real threats. You take control of a princess on the run as she recruits beastmen and dragon mages to help her in her quest to return to her homeland. The story is said to have a strong focus on the characters with ‘each party member has a distinct, memorable personality…  [with] distinct conversations with every inhabitant you meet.’ 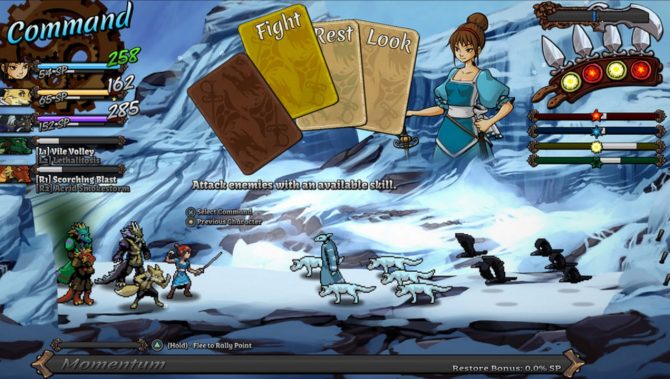 Battles take place on a sometimes crowded 2D plane where the heroes can charge up ‘Momentum’ for the different attack phases. Strikes and blocks are interactive as well with the ability to continually ‘juggle’ foes while also keeping an eye on the energy you have left. Each character will have their own unique skills that can be used and leveled up in the involved ‘Power Flow System’ (a mini-game somewhat reminiscent of the hacking challenges in BioShock).

However, if turn-based battles aren’t your jam, there a number of clever difficulty settings to tone down the challenge. The ‘light’ option ‘plays closer to a more traditional RPG’ whereas the ‘story’ option almost negates battles completely, focusing more on the narrative and adventure aspects of The Tenth Line.

The Steam page also highlights the game’s multitude of features:

Additionally, a trailer for the PS4 release was bundled with the PS blog post. Seeing The Tenth Line in action is an interesting experience and leaves me curious to see how the game will actually feel. Feel free to give the video a looksie and see what you think of this interesting take on retro RPGs.

Coming off its release for PS4 in 2019, Judgment will officially head to next-gen consoles and Stadia in April with enhanced visuals.