I just said that the previous piece of news could have been the last related to this year’s Tokyo Game Show. I was wrong, as I was forgetting the customary attendance numbers.

A total of 222,668 people visited the Tokyo Game Show during the four day, and almost every day (besides thursday, that was slightly behind the 2009 edition) shown an increase in the crowd from the previous editions.

Saturday also broke the record for visitors in a day, reaching a total of 83,744 people, as you can see from the table beyond the cut: 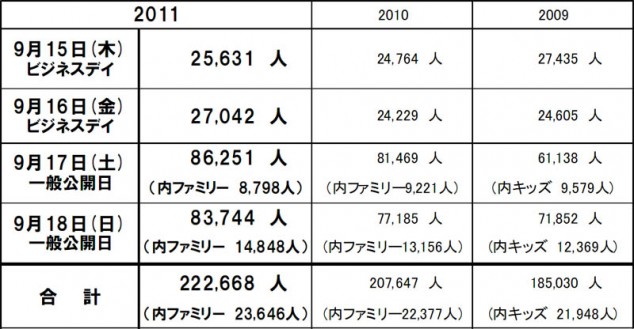 The success of this Tokyo Game show, despite the tragic events following the eartquake and tsunami last march, shows clear signs of recovering for the Japanese gaming industry and Japan itself.

During the event CESA gathered donations to help the reconstruction of the areas affected by the earthquake, and expressed the feeling that the warm messages and support from visitors and exhibitors will surely reach the people living in the Tohoku prefecture.

The dates for the 2012 edition have also been officially announced. Tokyo Game Show 2012 will open on Thursday, September the 20th, end on Sunday September the 23rd and will be held in the same venue of the Makuhari Messe, with the promise to meet the expectation of foreign visitors next year as well.

My expectations this year have surely been met, especially due to the stellar line-up of the PS Vita. What about yours?