People who are playing the latest Xbox Exclusive, The Medium, are noticing something interesting after rolling credits. As noted by VGC, after all is said and done, Bloober Team’s latest prompts the player to review the game on the Microsoft Store.

The message reads, “The Medium is our biggest and most ambitious game so far. It’s a close and personal project that was years in the making. We poured our souls into it and we’ve made a lot of great memories during development. However, as great as it is to make games, we do what we love with one person in mind – and that’s you. Your thoughts mean a lot to us, and they make us better developers. This is why we would love to hear your impression of The Medium.” 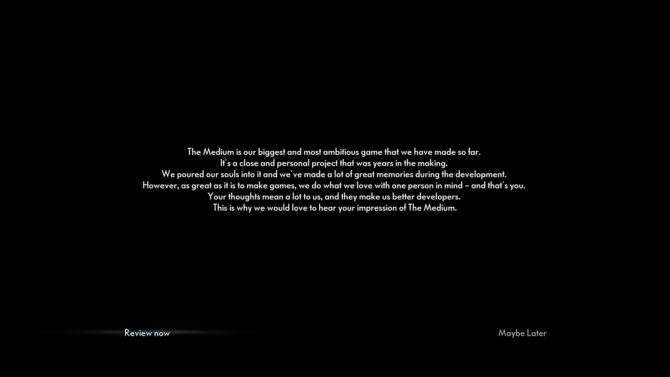 In addition to the Microsoft Store, reviews for The Medium have also started popping up online. Our reviewer, Charlie Wacholz, said, “Despite its technical prowess and stunning visuals, The Medium is a drag. From slow, uninteresting gameplay to a confusing and poorly executed story, Bloober Team’s latest makes for a good tech demo, but not much else.”

Leading the charge for Xbox’s exclusive and first-party lineup for 2021, The Medium was originally slated to launch with Microsoft’s latest consoles last year. Now, it’s the first in a laundry list of new first and third-party exclusives for the platform. According to Microsoft, at least 30 games will be launching exclusively on Xbox this year.

On top of that, there are pervasive rumors that two Xbox Game Studios games that haven’t been revealed yet are launching this year. According to the rumor from a LinkedIn post, one of the games will be a AAA open-world game. The other is allegedly coming from Compulsion Games, the studio behind Contrast and We Happy Few, which was acquired by Microsoft in 2018.

Despite its technical prowess and stunning visuals, The Medium is a drag. From slow, uninteresting gameplay to a confusing and poorly executed story, Bloober Team's latest makes for a good tech demo, but not much else. The Medium Gets a New Trailer During The Xbox Games Showcase