The Medium gives us a glimpse of what PC gamers will need for next-gen games.

Bloober Team’s The Medium is set to launch in less than 10 days. Soon, gamers across platforms will be jumping out of their seats with fear from the reality-shifting game. However, some information released today by Bloober is more important for those looking to play the game on their PC. A full, detailed list of PC requirements for The Medium has been released, and it shows exactly what players need to have in their rig before firing up the game at any quality.

The Medium Gets a Terrifying New Live Action Trailer

Before getting into the nitty-gritty of these specs, here are some important things to keep in mind. First off, these specs are all measured for the game at various resolutions, but one consistent 30 fps framerate. If you want to hit 60 fps or higher, you’ll likely need to have a slightly beefier build than what’s listed.

To run the game at its minimum settings, players are going to need, well, something that’s not all that impressive. With a GTX 1650 Super or AMC R9 390X, you’ll be gaming at 1080p. You’ll also need an Intel Core i5 6600 or any AMD Ryzen 5 processor. This is also the only quality level that lets players get away with only having 8GB of RAM to spare. Everything else going forward requires a full 16GB kit. 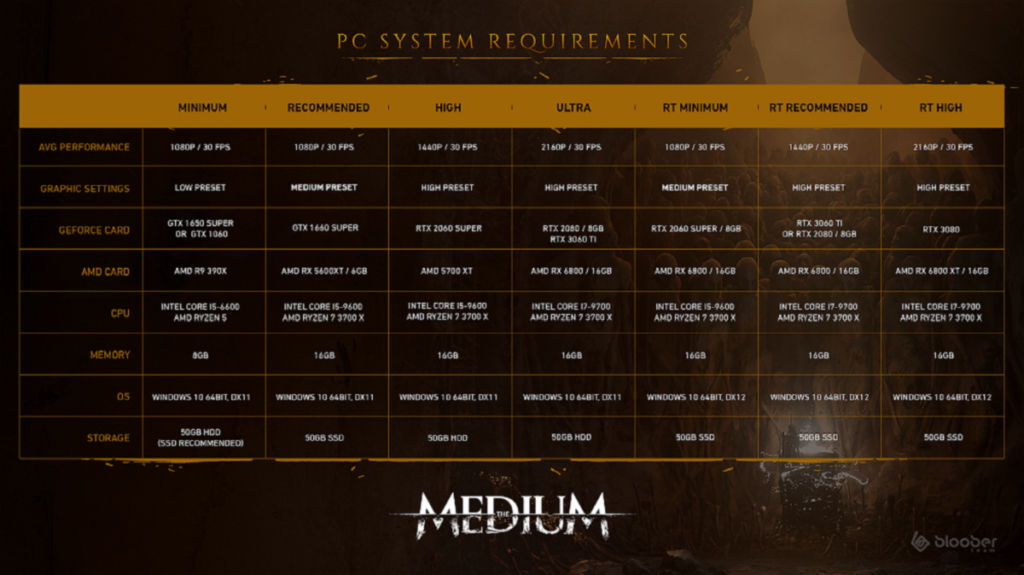 At recommended settings, things start to heat up a bit. Players will need either a GTX 1660 Super or AMD RX 5600 XT 6GB to play the game at 1080p. While that’s not the biggest jump in GPU power, the demand for raw processing capabilities jumps pretty significantly. At every quality above the minimum, The Medium requires an Intel Core i5 9600 or i7 9700, or if you’re running with AMD, a Ryzen 7 3700X.

Skipping up to ultra settings, things start to get really demanding. Keep in mind though that these requirements for The Medium are for gaming at 30fps at 4K. Bloober Team is recommending an RTX 2080 8GB or RTX 3060 TI, or an AMD RX 6800 16GB. Once you get into ray tracing territory though, those requirements get much more demanding on the Nvidia side. If you’re trying to play The Medium at 1440p with ray tracing, you’ll need at least an RTX 3060 TI or RTX 2080 8GB. If you’re trying to push everything to the max and game at 4K with ray tracing, naturally you’ll need Nvidia’s RTX 3080.

The Medium Will Support RTX and DLSS on PC, Ray Tracing on Xbox Series X

Regardless of what quality you’re playing the game at, or if you’re playing with ray tracing, specs for The Medium claim it will only take up 50GB of drive space. That being said, you’ll likely want to store the game on an SSD for faster load times. The Medium is set to launch on January 28 on PC, and the Xbox Series X|S.

Official PC system requirements have been revealed for The Medium and it requires a modern-day set-up to be played smoothly. The Medium Gets a Terrifying New Live Action Trailer