Toby: The Secret Mine Review — More Like an Empty Cave Toby: The Secret Mine Review — More Like an Empty Cave

Toby: The Secret Mine is Lukas Navratil Games' attempt at creating a puzzle-platformer reminiscent of Limbo, but does it do enough to set itself apart?

Toby: The Secret Mine, a game by indie developer Lukáš Navrátil Games, makes no secret of the titles that have inspired it. Much of the game’s charm comes from the elements it borrows from Limbo and Badland, namely the core art style and gameplay. Drawing similarities to such lauded games can be dangerous, especially for a debut title.

Unfortunately, Toby: The Secret Mine rarely finds a way to innovate away from those games or any other title in the puzzle-platforming genre, and it is that lack of a unique quality that makes it feel tired.

Toby: The Secret Mine has a very loose plot. It keeps things simple so that the player can infer what’s occurring in the story and, at that, the game succeeds. It appropriately conveys that a civilization of white-eyed cat people are being preyed upon by larger, red-eyed cat people without dousing the screen in explanatory text.

The main character, Toby (I assume that’s his name, though it’s never mentioned outside of the game’s title), goes through the game, tracking down the red-eyed giants who have taken his friends. Combined with a sufficiently creepy tone, it’s a premise that seems too easy from the onset. It starts off feeling like a game that’s hiding some ugly twist.

However, that twist never fully develops unless you consider one of the two endings to be sufficiently unexpected or imaginative (they aren’t). For a plot that feels like it’s about to take its next breath at any moment, it never fully pays off even at the climactic end, which lacks any sense of rising action. 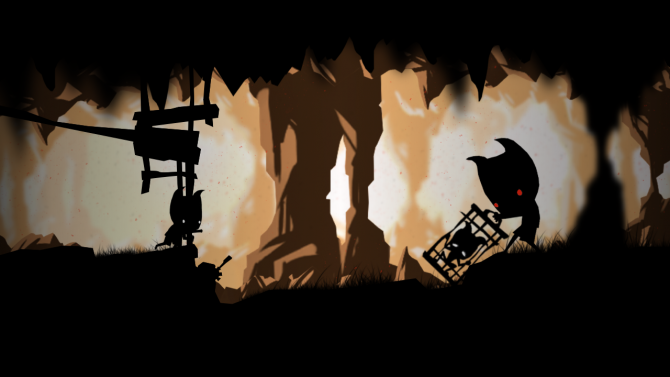 This lack of progression further extends to the rest of The Secret Mine‘s experience. Toby never receives new abilities or equipment, not that he should be expected to. After all, these are hardly hallmarks of a 2D puzzle-platformer, or at least not the ones that The Secret Mine draws inspiration from. Still, that doesn’t mean that the genre is exempt from rewarding players in some way.

As previously mentioned, the plot doesn’t earn The Secret Mine any points here, but neither does the gameplay. Puzzle-platformers usually find success by introducing the player to a new concept, then throwing in a new element to make things interesting and ultimately to make the player feel they have learned and mastered something. Although the difficulty spikes early in The Secret Mine, it becomes more tedious rather than more challenging and solutions to certain screen-prompted puzzles sometimes feel downright thoughtless.

I recall a couple of such puzzles that were organized by a number of symbols, but without any clear clue as to what combination would result in success. I had to cycle through random combinations to get through these, eventually feeling like I had somehow cheated the system rather than achieved anything of substance. 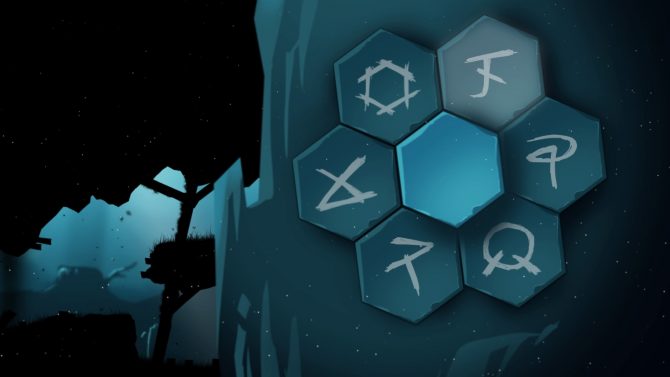 Although gameplay begins and ends at two very contrasting difficulties, it never varies enough to be fun

As for the quality of the in-environment puzzles, they hardly ever rise above a simple design. When you encounter a new obstacle that seems insurmountable, the solution is likely hidden only a few steps back. The first time this happened, I realized that the game had succeeded in momentarily fooling me. “Good on you,” I thought at the obscurely placed box hidden in a corner I had no reason to believe existed. When it happened another five times, it was less amusing and just grew to be expected. Although gameplay begins and ends at two very contrasting difficulties, it never varies enough to be fun.

Although borrowed, one of the most impressive aspects to Toby: The Secret Mine is how it looks and sounds. The silhouetted view might have a ‘been-there, done-that’ feel for some, but for a developer who would rather imply violence, it works here.

When death befalls Toby (and you can be sure that it will many times over), it doesn’t have the same level of graphic violence as Limbo, but you can imagine the damage that Toby has sustained from the manner in which he dies. The game’s presentation allows for that. The music mostly serves to help along the game’s more mature atmosphere. 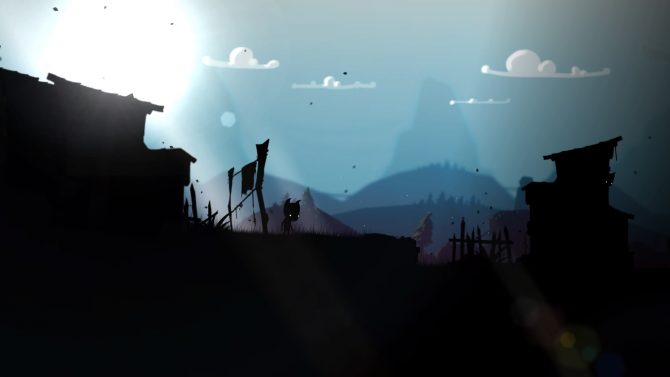 While working to establish this darker tone, Toby: The Secret Mine juxtaposes it with elements that lighten the mood. The game’s characters are undeniably cute, both in appearance and in how they sound. When Toby can’t interact with an object, he mews and shakes his head. When Toby saves one of his captive friends, they rejoice in delight.

This combination of a dark style with an occasional lightness never feels in competition, either. This harmony of conflicting tones is actually one of the only aspects of The Secret Mine that is remotely original and well-executed.

To the game’s credit, these cute characters also match the harsh world that Navrátil has crafted. Over the course of the game, Toby will traverse forests, deserts, and mountains to free his friends. The dangers that lurk in these places are extreme, but the same art style that establishes some of these more frightening elements is the same that defines Toby’s people.

However, the world suffers from environments being too varied, resulting in a disjointed amalgam. After completing a desert level, I watched as the screen turned uncharacteristically bright. I hoped there was going to be some revelation or moment of clarity for Toby. Instead, I was inexplicably on top of a snowy mountain. Nothing more. The same puzzle-platforming gameplay just continued straight into the next area without any sense of transition. 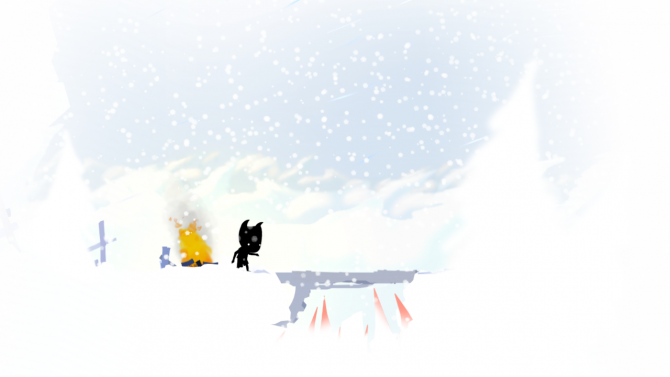 Toby: The Secret Mine’s performance is pretty good as a whole with only a couple of instances that caused me some frustration. The most prevalent of these took place near the end of the game while platforming on a series of turning buckets. After I had fallen a number of times, I soon found that after regenerating at the checkpoint, I couldn’t even land properly on the first bucket, a previously simple endeavor. I first assumed that I was at fault, making some sort of micro adjustment to force Toby to slide off the bucket. However, after testing this at length, I found that Toby just wouldn’t stick to it. I eventually had to reload the level to an earlier checkpoint, which resolved the issue but not after significantly testing my patience.

For all of the inspiration that similar titles have leant to Toby: The Secret Mine, the game fails to do the most important thing: to establish itself and become its own. The end result is a mechanically sound puzzle-platformer heavily reminiscent of other games from the genre, but in a far more watered-down form. Additionally, at only about three hours in length with few reasons to replay save for a second ending (you can just play the last level again to get it) and only a few missing collectibles, Toby: The Secret Mine is not something worth playing before getting to one of the games it was born from. Toby: The Secret Mine Gets a Launch Trailer

Toby: The Secret Mine Coming to Xbox One January 20th Double Cross Gets New Trailer Ahead of Thursday’s Release