When dad jokes are combined with efficient healthcare planning: you get Two Point Hospital.

When you think of your weekend plans, you don’t picture yourself hanging out at the hospital for 8+ hours (at least not before many drinks). However, with Two Point Hospital, that is precisely how I spent my Saturday night… all night. You wouldn’t think that being around medical staff, equipment, and patients would be very interesting. That is, until a patient with a lightbulb for a head saunters in suffering from “Lightheadedness.” That, the casual, pun humor, is what drew me into Two Point Hospital, but the management of the hospital is what kept me addicted.

“…the casual, pun humor, is what drew me into Two Point Hospital, but the management of the hospital is what kept me addicted.”

Having never played Theme Hospital, I went into Two Point Hospital with the expectation that it would play similarly to many of the other simulation games I’ve experienced–but with a Wallace and Gromit aesthetic. To my delight, I was surprised to find that the game had a much more extensive gameplay loop along with a quirky sort of humor that I wasn’t expecting, which only fueled my rampant Two Point Hospital addiction.

Ailments that the patients can suffer from can range from the ordinary to the absurd. The player will experience a wide variety of diseases, seemingly more and more ridiculous until patients coming in with pans on their heads, plagued with “Pandemic,” or curing clowns of their sad, scary humor seem commonplace. The animations on how these more unique illnesses are “cured” are pretty amusing. I mean, how ELSE would you cure “Lightheadedness” than unscrewing a person’s lightbulb-for-a-head, and giving them what looks like a 3D-printed version of a human head instead? And though the zany illnesses become the norm, they never cause the environment of the hospital to become stale. 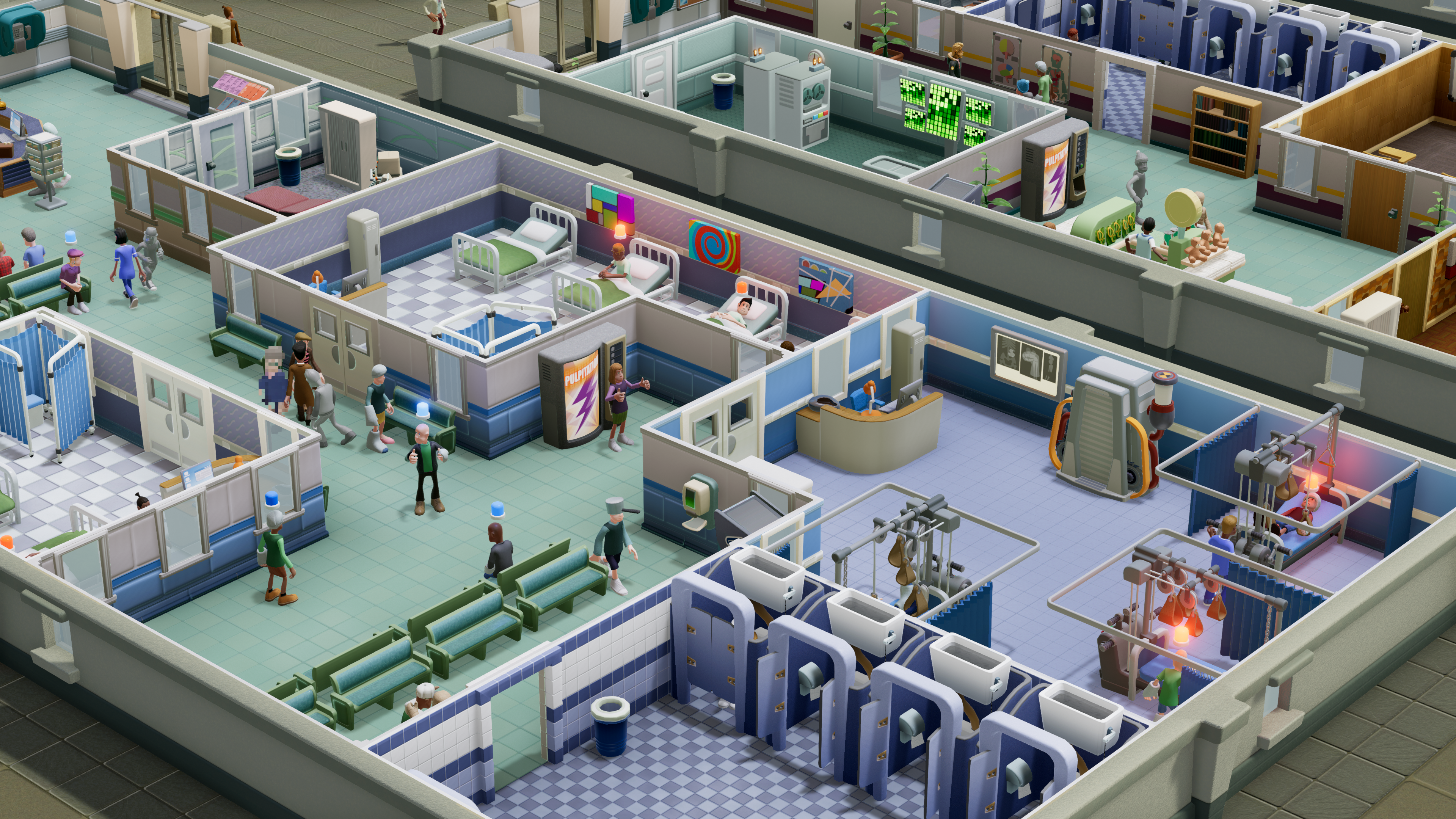 Playing through the campaign feels very organic in how Two Point presents each room, function, and illness gradually; you don’t feel bombarded with information, and you aren’t entirely clueless on how the mechanics work. That’s not to say the game is simple since a level of strategic planning and attention is required to ensure your patients don’t end up dying and haunting the other patients (yes, they do turn into ghosts sometimes). I learned the valuable lesson of making sure that fire extinguishers are always handy nearby expensive equipment after the first machine exploded. As unexpected as Two Point Hospital can be, the game does a great job at preparing you for the worst.

As mentioned before, the art style of the game is reminiscent of Wallace and Gromit, as well as its dry sense of humor. Combined with the upbeat and catchy music tracks (with some radio commentary peppered in at times), the feel of the game fills the player with positivity, despite the sickness found throughout the hospitals. For all this positivity, however, the hospital styles are all somewhat uniform. Not much customization is to be found in how the hospital, rooms, staff members, or objects look. Even the hospital locations don’t vary too much regarding appearance.

But, what lacks in diversity, Two Point Hospital excels in quality of the appearance, especially when it comes to the animation of the little patients and staff members. Everything appears just as detailed as the next thing, whether it be a doctor, patient, or room, and I have yet to come across any lagging or unintentional design flaws while playing on Max settings. The appearance, while plain and constant, stays extraordinarily polished and doesn’t suffer in quality throughout. 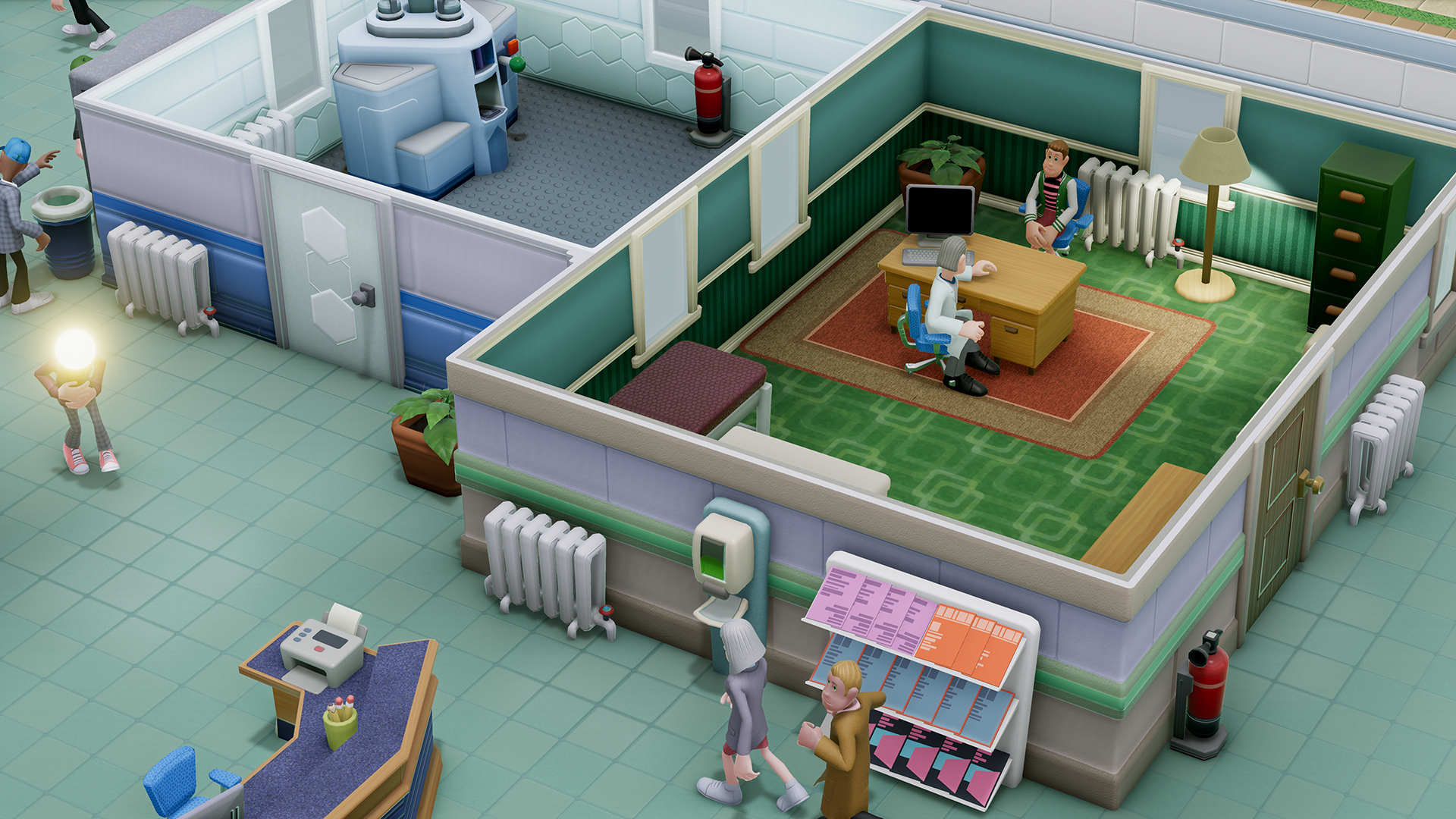 The nature of simulation games tends to be redundant as far as what achievements need to be completed to progress. Some games excel at building upon what was laid out early on and utilizing what was learned to a better potential; meanwhile, other games just continuously add on and eventually replace the old with the new. Two Point Hospital employs the former, in that nearly every room, doctor, disease, training, research, and patient stays essential to the growth of the hospital throughout the entire game. One aspect (like maintaining proper heating in the rooms) may not seem necessary for the time being but will find itself pertinent to improve your hospital’s rating later in the game.

The upside to this is that Two Point Hospital doesn’t become stale and that the player is continually keeping an eye on multiple things going on at once and keeping busy. The downside to this, however, can be that there are indeed several functions that the player may not take advantage of often, if at all.

For example, the “Finance” tab, which shows the revenue, growth, expenditures, everything the hospital makes or doesn’t make, was hardly used throughout my playthrough. I recall only using it a few times to adjust hospital prices in my rural, less-populated hospitals. That’s not to say this function isn’t important, but that I didn’t benefit from it much. 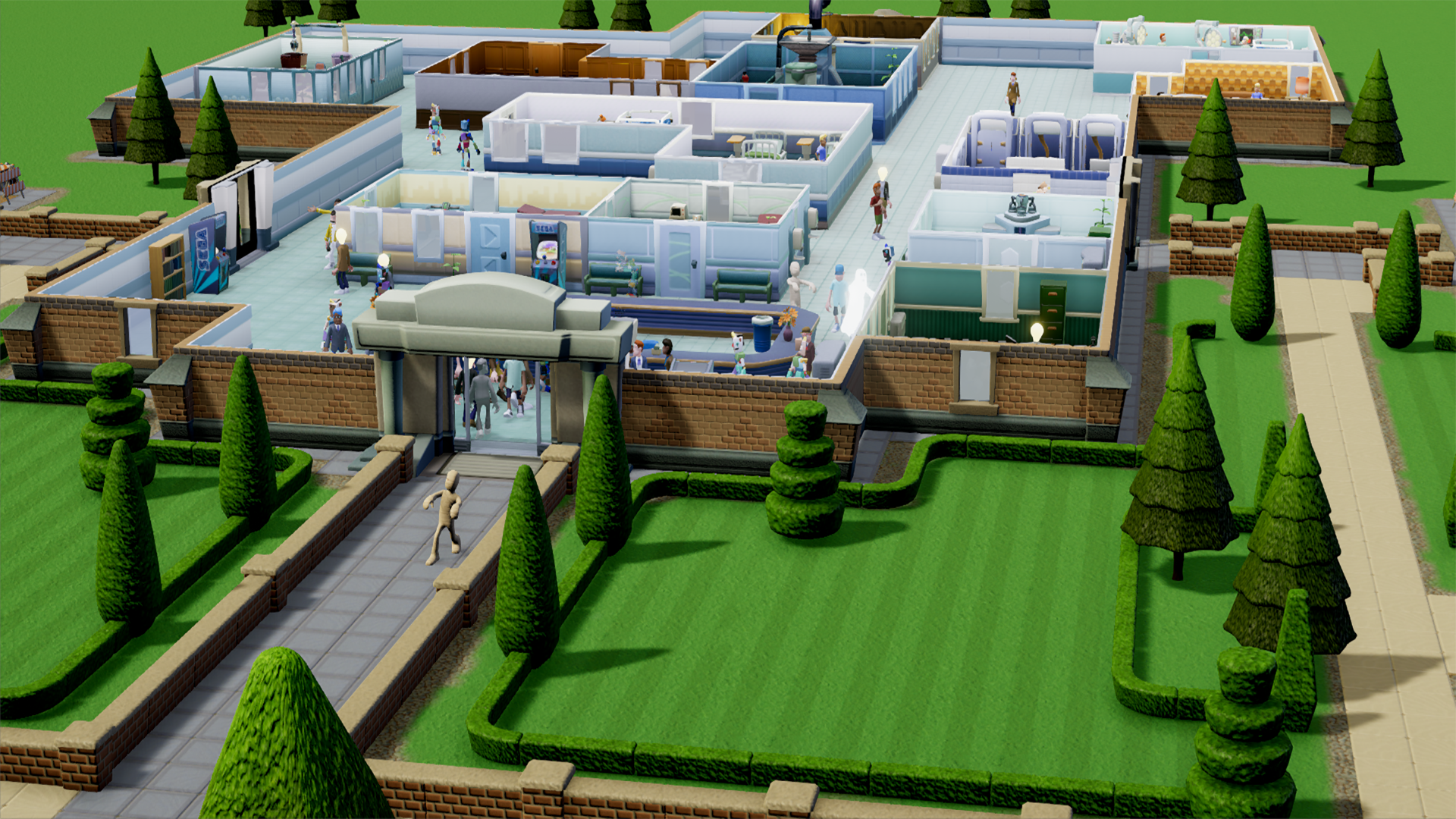 And many other features in the game might not be employed as much as some others. However, this all comes down to a personal play style, and how the player tends to play strategic or simulation games. Additionally, Two Point Hospital does include multiplayer challenges, though the review servers didn’t have too much functionality. Even with the multiplayer aspects, my feeling of the game is that it is preferential to a single-player style of gameplay.

“Two Point Hospital is easily one of the best sim games you can grab in 2018.”

Overall, Two Point Hospital is a delightful addition the to the simulation game genre, providing quirky humor and design, with polished gameplay and hours of fun. I’m not exaggerating when I say that I spent 8+ hours of my Saturday planted in an uncomfortable seat playing the game, and that was just when the preview build was out.

Though not all of the features were used to their potential, I got a lot out of the experience of playing the game and didn’t feel too overwhelmed (as much as possible when your patients start dying, at least). Developer Two Point flashes their pedigree with their freshman game; Two Point Hospital is easily one of the best sim games you can grab in 2018. I don’t consider myself to be an overachiever generally, but in Two Point Hospital, I try to run the best possible hospital, not just for my patients’ well-beings, but to keep the game continuing on. Two Point Hospital: Culture Shock takes your hospital to Hollywood where you'll be caring for all of the maladies that affect show business. Two Point Hospital for Consoles Has Been Pushed Back to 2020

Sega is Revealing a New AAA Game at Gamescom

Two Point Hospital is Coming to Consoles in Late 2019