The latest issue of V-Jump contained an exclusive interview with Dragon Quest creator Yuji Horii and Kou Shibusawa who is the General Producer at Koei Tecmo. During the interview they spoke on why they waited for the PS4 to do this project, the original name they had for this game, voice acting and more.

These two were asked a series of questions which we summarized for you below:

1) Horii Yuuji (creator of DQ) was a Nobunaga’s Ambition fan, playing it on the PC and Shibusawa Kou is a DQ and The Portpia Serial Murder Case fan.

2) They wanted to collaborate for a long time and Shibusawa suggested to create an action version of the game.

3) Horii wanted the game to have over the top action like the Musou series, yet have the giant monsters from the Toukiden games that people have to take down together.

4) They would have liked to call it Dragon Quest Monsters but the game has been around for a while, so they chose Heroes because you and your companions are heroes.

5) Horii isn’t good at action games and also kept in mind of DQ fans who may not be  good at them either so they made it an Action RPG instead so that players can level up and grow stronger.

6) They couldn’t previously make this game because the older consoles weren’t able to do what they wanted. They wanted epic battles with 200+ different monsters and characters battling on screen with no lag or problems of any type, and that’s why they chose the PS4.

7) All main characters will be voiced and will talk to each other during battle like other Musou games.

8) They made sure to balance all of the different characters attacks and weapons that are available within the game.

9) Horii personally asked for DQVIII`s Jessica to be available within the game as his wife likes to slap his rear randomly, he wanted to do the spanking with her whip for a change.

10: Characters that shouldn’t meet in the lore will meet in this game.

12) Talks about the previously known main characters Act and Meia then about the the games mascot character ‘Homiron’ which is a Healer Slime.

13) They said that the story is a secret so they will not spill any news on that.

14) They say to imagine the story from the subtitle of the game “The Dark Dragon and the Castle of Yggdrasil” .

15) Horii says that if you check out the PV again you will be able to see one of the Boss characters for in a single scene and that the character is a “dark person”.

16) They explain that the next issue will also have another special interview with 2 other legends. 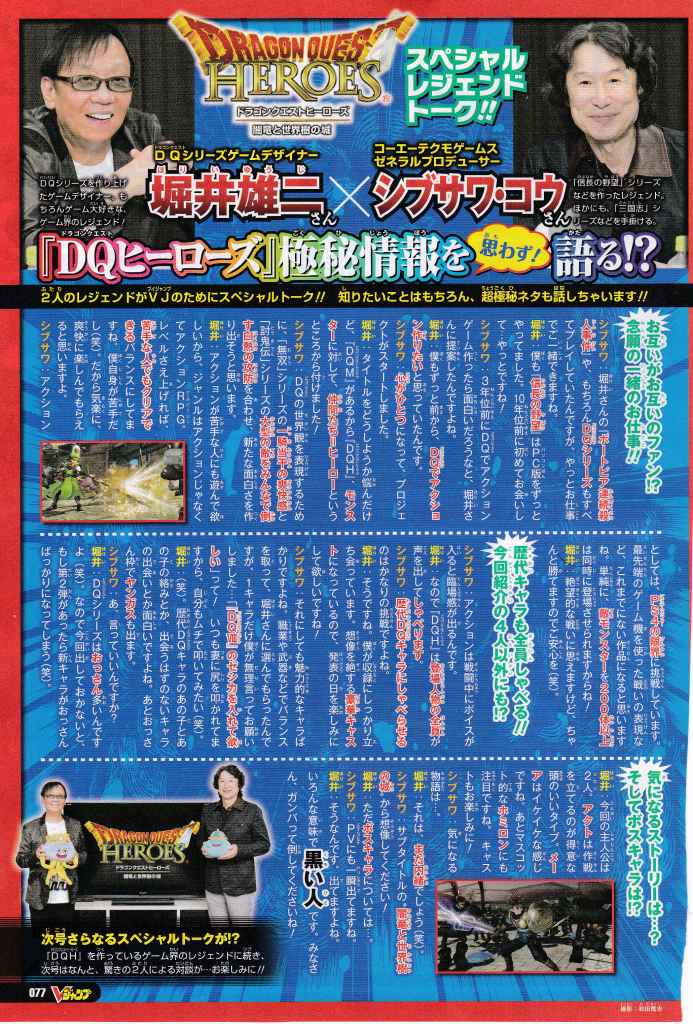 Dragon Quest Heroes director delves into a possible third entry in the franchise and how that would require substantial improvements.