During E3 2016, SEGA and Relic Entertainment showed off a gameplay demo for Warhammer 40,000: Dawn of War III, hereafter referred to simply as Dawn of War III. The presentation was narrated by campaign lead Brent Disbrow, who guided us through a Space Marine mission. Set late in the game, it was a great demo for showcasing elite units, army composition, and some of the new mechanics and locations you will have access to in Dawn of War III.

Gabriel Angelos, Captain of the Blood Ravens’ 3rd Company, returns as an elite unit. Each elite unit will have their own icon on the side of the screen that gives an at-a-glance overview of their current status. Angelos’ abilities include an energy dome that will knock back surrounding units and reflect bullets. His other major skill, God Splitter, sees him jump into the air and slam to the ground with his massive hammer. This skill doubles as an attack and a way to cross gaps or reach higher ledges, adding previously nonexistent verticality to the environment. Angelos’ attacks frequently will send smaller enemies flying, whether from basic attacks orhis special skills, he effectively shows off the charisma and power of the Space Marine faction. 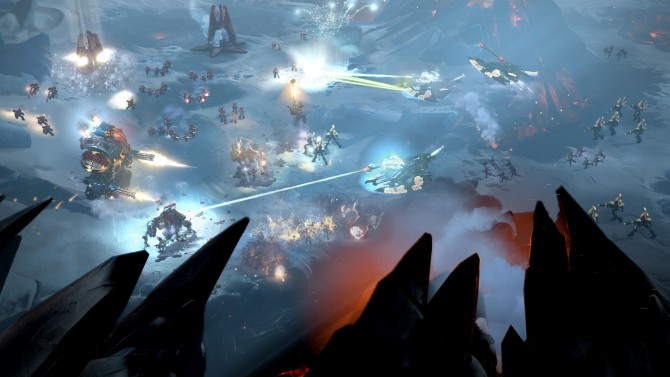 An ice planet named Acheron was the stage for this particular mission, and it is a mysterious new planet introduced in Dawn of War III. Also present on the planets surface are the Eldar, the opposition for this section. Gone are the urban pathways of Dawn of War II. Relic plans on opening up the maps for each campaign mission, and spread it out across a variety of biomes for each planet. Missions play out from the perspective of Space Marines, Eldar, and Orks, that are the factions available at launch. The wording makes it appear that Relic may be open to adding onto that post-launch, though aren’t confirming anything.

A second elite unit was introduced to back up Angelos, an Imperial Knight manned by Lady Solaria, a new character. Her unit is the biggest ever seen in a Dawn of War game. Featuring two giant Gatling guns, she can fire a barrage in a cone shaped area directly ahead of her. Each of the elite’s abilities are on timed cooldowns, with different lengths depending on the strength of the skill. Solaria’s other ability was an Iron Storm Missile Barrage which lets the player select six targets to be pummeled by a missile strike. 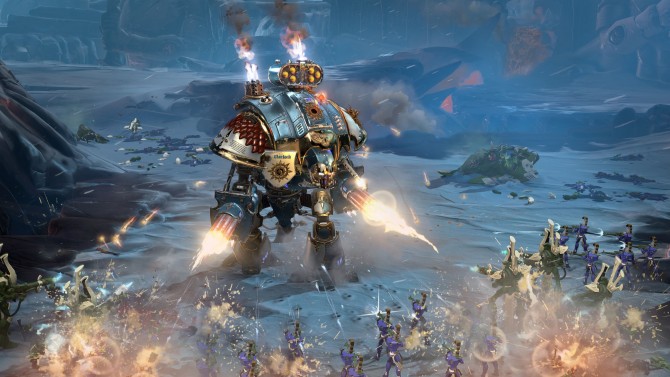 Base building returns from the first Dawn of War title, though it was not heavily featured in this gameplay demo. Instead we spent a brief time at the Space Marine base, called in a couple new buildings, and then moved onward to slaughter more Eldar. In Space Marine fashion, buildings, and reinforcements, are brought in from space via drop pod. Each drop pod can contain pre-selected units that gives the player more options during combat. Elite units will be able to auto-heal at base, though it appears common units will have to be reinforced via drop pod.

Common units lasted quite some time, despite their constant presence in battle. This may have been due to the presentation being a narrated demo, or the difficulty level. Bringing in units through a metal cage that pummels into the ground is fun in a violent, energetic way. 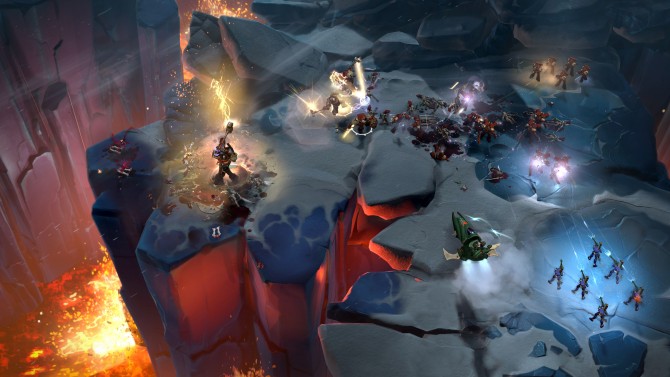 Dawn of War III is also gorgeous. Despite being labeled as Pre-Alpha footage, what was shown had small details that really help establish its world. Everything from the heat of Solaria’s Gatling guns to the bullet casings ejected while she fired. The particle and lighting effects of Angelos’ hammer strikes, pieces of the world crumbling downwards, and the weather effects were all impressive. A downside is that units can sometimes clump together into a large sea of generic looking soldiers, which is bad when you need to manage individual units. Warhammer has always excelled with its future fantasy art style, and that continues here.

Dreadnoughts return, with a knock back ability called power slam and are still quite a force to be reckoned with. Heavy cover is now a specific area of the map with a shield. Instead of sandbags and other constructions, Relic wanted to have clarity of cover and scale it with the increased size of battles. To this end, heavy cover will disappear once destroyed and cannot be brought back for use. While it will protect units from ranged attacks for a period of time, those inside are still vulnerable to a melee unit entering the safe zone. 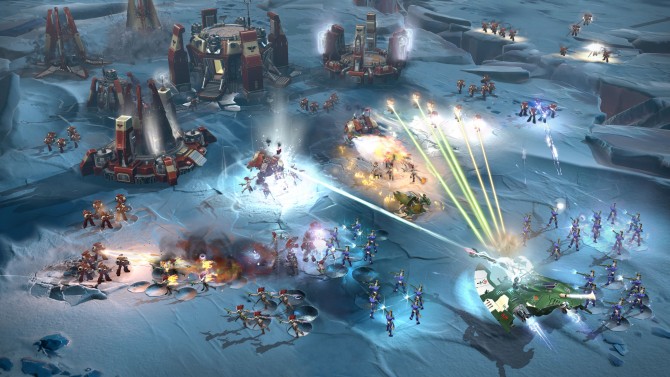 A few Eldar Fire Prism gravity tank’s appeared, but the Space Marine’s countered with a Devastator squad armed with Lascannons. The Fire Prism also telegraphs its attack with a laser pointer that charges, allowing the player to move units out of its intended pathway before it can unleash its beam. Devastator squads deal more damage the longer they can keep connecting with their target, which really pushes their anti-vehicle role.

Much like the Fire Prism, some of the Space Marine attacks are similarly telegraphed, such as Lady Solaria’s missile barrage which will highlight the area selected. The delay between marking the land and the missiles firing is enough that a quick command to move could save a unit from absorbing massive damage. 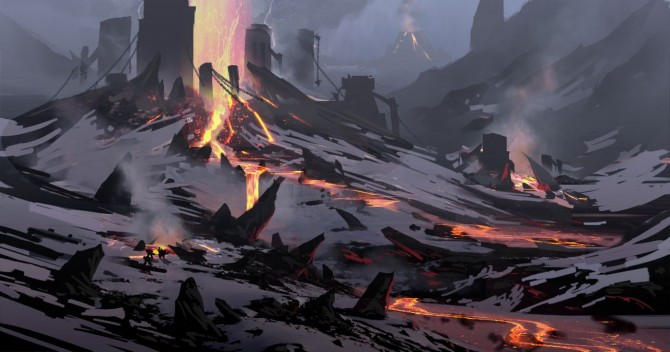 The main goal of this mission was to take out a large Eldar gate, which obviously had to be guarded by a large force. After engaging with the Eldar for a short time, the Space Marines called in their super ability: orbital bombardment. This giant laser descends from space to eliminate anything in its path. For the first time this bombardment is fully controllable by the player. While it will gain offensive power the more units it swallows up in its fiery glow, the slower it will move.

While Disbrow stated this super ability would not be an “automatic win button,” its hard to imagine just how someone will be able to defend themselves from a beam of death. 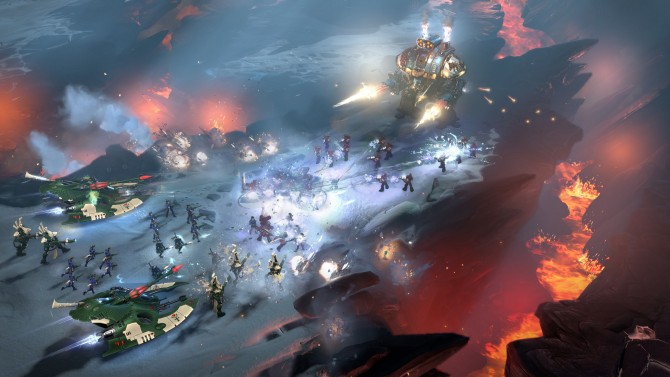 While this gameplay demo had a lot of systems and units at work, Disbrow assured us those who are new to the real time strategy genre will be slowly introduced to each mechanic. This buildup of lessons culminates in battles where the player has to micro-manage a large army made up of multiple hero units, vehicles, and smaller squads. You can also create custom unit groups, as is common in games of this genre, which will allow for faster management for players who can keep track of their groupings.

Everything shown from Dawn of War III looks promising. The gameplay has the complexity you expect of an RTS, but also the fun fantasy feel of Warhammer’s roots. While still early in development, it looks beautiful and the video appeared to be running a real-time demo with no editing or touch ups. Even knowing nothing about the multiplayer, which I generally avoid due to lack of skill, there is a lot to look forward to just with its single player campaign. I worry that the dense Warhammer lore may be a slight put off, but the intensity of large-scale combat with large units is too fun to pass up on. The folks over at Humble Bundle have revealed the rest of the games that'll be included in their Humble Monthly subscription service this month.