With a mix of survival, horror, and a dose of the 1960s, We Happy Few is a title that immediately stood out to many with its official reveal early last year. Coming from developer Compulsion Games (previously of Contrast), there’s much to like from just a quick glance at the whacked out, trippy vibes of the studio’s second venture from its setting down to its British inspiration, though time will tell what the full experience will end up being like down the line.

Originally revealed during last year’s PAX East 2015, We Happy Few arrived with trailers and footage showcasing a psychedelic world inspired by 1960s London, and immediately drew players in with its dystopian vision and a world, setting, and characters that provided some reminiscence to games such as BioShock. However, from our previous demos with the game and more extensive playtime with the Early Access version of the game now available on PC and Xbox One, it’s clearer that We Happy Few is an entirely different animal than what players might expect, but one with some tangible threads of promise among its rougher edges. 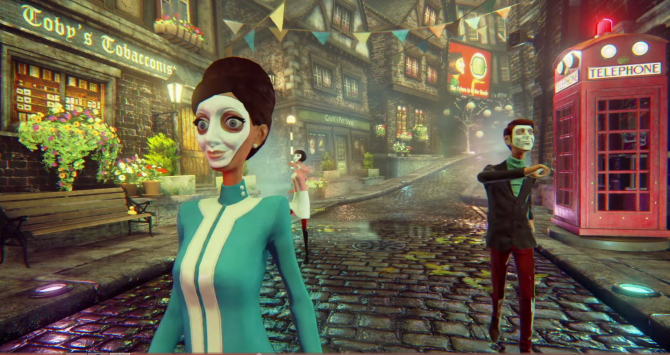 Now available in Early Access, We Happy Few puts players in the middle of the dystopian, London-esque town of Wellington Wells, where its delightful streets and (overly) cheery citizens soon give way to a far seedier world where a watchful eye (like Big Brother) looms over everything. Even more than that, the cheery citizens of Wellington Wells are actually drug-addled fiends that are hopped up on the psychedelic “Joy,” with players having to fight and survive their way through the town by all means necessary.

From its initial trailers and footage, We Happy Few has shown large glimpses at its setting and (some) of the narrative elements that will drive what players are doing while they explore Wellington Wells. However, an important distinction is to be made that where BioShock focuses on FPS action, this does not. Instead, We Happy Few‘s focus is on survival, and the current experience in the game may provide a stark contrast to a more linear, narrative impression that players may be expecting from the game. 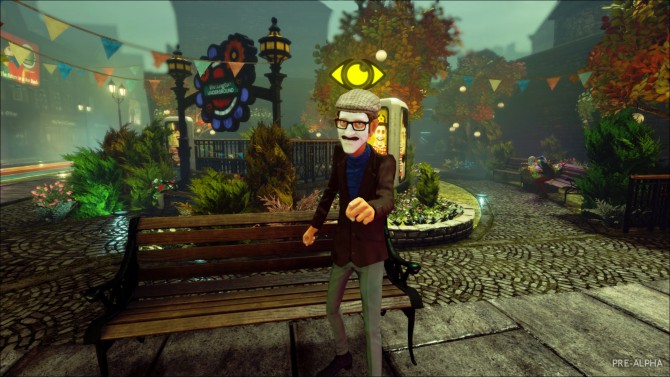 In particular, that focus is tied into players having to manage their characters’ stats, ranging from thirst to hunger, in order to survive. That will to survive can prove to be a bit of a challenge when the meager offerings from Wellington Wells only offers rancid meat and dirty water. With all of the town’s eyes on you, the importance comes down to players using stealth and skill to go as undetected as possible.

With influences from the likes of A Clockwork Orange, 1984, Brazil, and other sources of classic films and literature, We Happy Few‘s inspired premise provides some intriguing hooks for its gameplay. While survival games are a dime a dozen nowadays on Steam Early Access, what’s initially been seen so far in the game’s Early Access version shows promise. 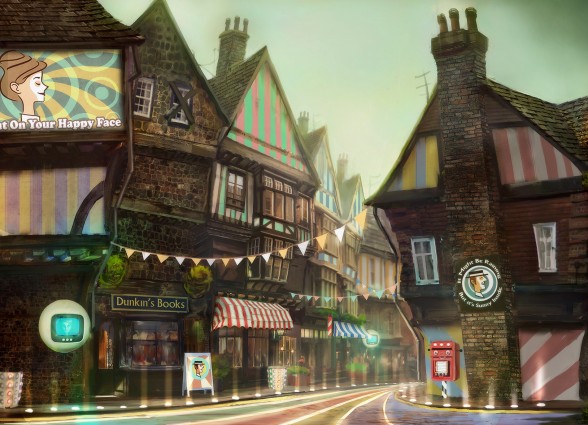 Aside from the usual cycle of having to scavenge for food and craft items, the citizens of Wellington Wells always provide an downright eerie, watchful eye over the player that forces a mix of stealth, cunning, and some blending in to prevent aggravating them.

While resorting to violence will sometimes be necessary, the more crafty players will have to utilize stealth and learn how to “hide in plain sight” to avoid alerting the citizens of Wellington Wells to you, an outsider. Instead, players will have to resort to popping pills of “Joy” to lower their suspicion – of course, the adverse effect is that the drugs makes players high as a kite, while more rapidly draining their stamina, thirst, and hunger meters. 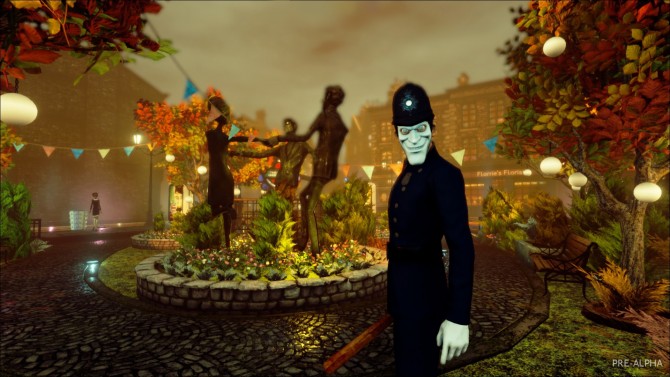 On this front, We Happy Few creates a great system of checks and balances. Players will constantly be on the lookout for supplies that can immediately satisfy their needs (food, water, etc.) while also balancing the need for items that can be used down the line, whether that’s in finding new weapons, items, or components that can be used for crafting. Along with the eyes of Wellington Wells on you at (nearly) every moment, We Happy Few is genuinely creepy, while its world is intriguing and infectious.

However, in its current state there is much in We Happy Few that proves rough around the edges. As the environments are mostly procedurally-generated, texture pop-in and other frequent technical glitches have been apparent in the game’s Early Access build that blur the line for players looking to be immersed in the world of Wellington Wells. Even moreso, most of the game’s narrative elements are kept to a minimum in the current build, other than its scripted opening, so knowing the true nature of what players will be doing and who they will be meeting to guide them through Wellington Wells is not completely clear just yet. 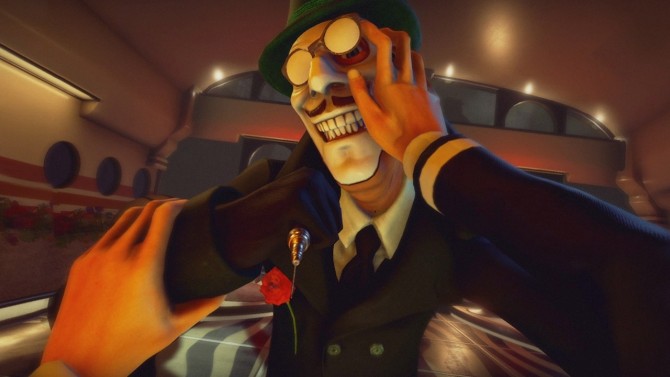 With its Orwellian roots and an intriguing world, it’s already clear from the early builds of We Happy Few that it offers a survival experience that’s quite different from anything else out there for Early Access lovers. Though the initial impressions and trailers painted the picture of a title that could draw more than a few comparisons to BioShock, it’s important to note that We Happy Few provides an experience that is far different, and as of right now, not yet finished.

In its current state, We Happy Few certainly needs some tweaks and refinements in order to create a more fully fleshed-out and complete experience. However, Early Access state aside, I wouldn’t mind popping a bit more Joy to jump back in to We Happy Few‘s wacky, twisted world. We Happy Few Devs “Hungry” to Take on a New Universe

The team at Compulsion Games has learned a lot from developing We Happy Few and can't wait to take those lessons to a new universe. We Happy Few Review — Could Use Some More Joy We Happy Few Scratches My Bioshock Itch, Even With Major Differences