Do you still buy physical copies of games? Does the inclusion of a full color manual bring you an unusual amount of satisfaction? Do you enjoy transforming your living space into a colorful testament to the medium we so adore? If you answered yes to any of those questions you’ve come to the right place, where the spotlight falls on the new novelties and collectibles of the video game world. After all, there seem to be more coming out these days than at any point in the past; it just keeps growing!

Last month, the collector’s edition of the long awaited PS4 exclusive The Last Guardian was revealed. It includes a premium Trico statue, a 10-song digital soundtrack, a SteelBook case, a 72-page artbook and stickers in addition to the game, all in a collector’s box.

At $119.99, the pricing is about standard for sets including statues or figures of some sort, and the inclusion of the SteelBook is what really sells me. While I may have amassed a small group of those included with games, I myself am not huge on figures and statues.

Not only do these kind of extras typically cause the set’s price to spike, but I hear from fans of statues and the like that those included in game sets are typically of questionable quality, though I can’t say if it’s true or not. With The Last Guardian, we can be sure that a decent chunk of the price can be attributed to the inclusion of the Trico statue. 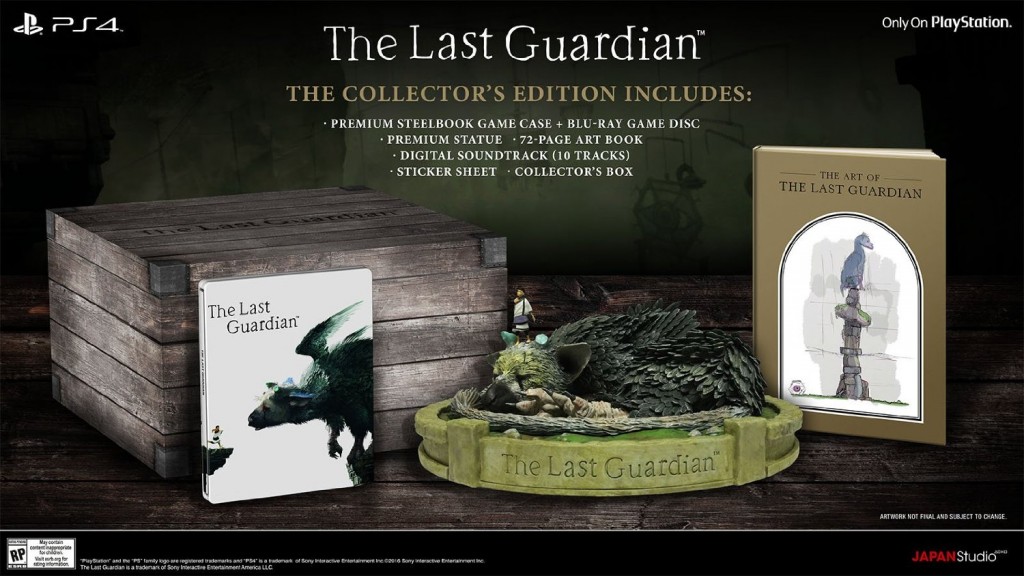 Unsurprisingly, The Last Guardian set disappeared from Amazon quite quickly after being revealed. I say unsurprisingly because people have been waiting for this game for about as long as we’ve been waiting for Final Fantasy XV (or at least it seems). At the time of this writing, the set appears to be reselling at around $200 on ebay. This is strange because as I write this, you can still get it for MSRP at GameStop.

Revealed earlier this month was the Sword Art Online: Hollow Realization collector’s edition. The bundle is priced at a whopping $149.99, but for that you’ll get the PS4 game, 6” figurines of Kirito and Asuna, a proper SteelBook, an art book, a Blu-ray bonus disc, a sheet of decals, and mini-posters. Now, I know I just confessed that I wasn’t crazy about figurines, but Asuna’s design has always appealed to me and I’m a fan of her character in the first arc of Sword Art Online.

From the pics, it looks like she’s considerably detailed, so I’d be happy to have this even without the SteelBook. I’m also big on posters and art books, so I’ll probably have to get this despite the high asking price. Generally speaking, sets published by Bandai Namco are readily available at launch MSRP (or sometimes even cheaper) up until and well after the game’s launch, so you should be fine if you want to hold out on getting this for reviews, or if you need to save up first.

A noteworthy exception is of course the Wizard’s Edition of PS3 exclusive Ni No Kuni. Interestingly though, this item is currently sold out at Amazon, so maybe there is some risk for waiting too long. 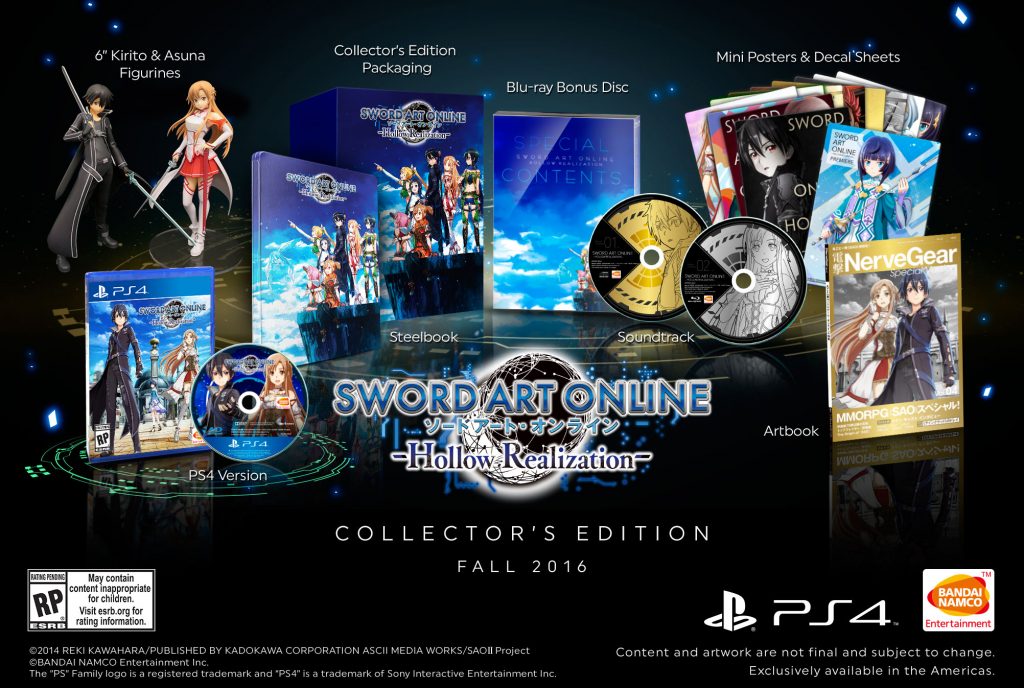 Also revealed earlier this month was the Eternal Wanderer Edition of the upcoming PS Vita port of Shiren the Wanderer: The Tower of Fortune and the Dice of Fate. The set is $59.99 (a $19.99 markup from the standard edition), and includes the Vita game, a hardcover art book, a limited edition soundtrack, a nonary bracelet and nonary box.

There’s an interesting backstory to the bracelet. Chunsoft developed both Shiren the Wanderer and the DS hit Nine Hours, Nine Persons, Nine Doors, and in the latter game, the nonary bracelet is a key item. As a neat crossover, the nonary bracelet appears as an item in Shiren the Wanderer and thus is in the game’s limited edition. Pre-orders for 999 also included replicas of the bracelet, but we can see from the image below that the two bonuses are quite different.

In a rare move, Aksys has made the set available exclusively through their online store. I’m not sure how it typically handles pre-orders, but for this item you have to pay in full at the time of the order. I checked it out and the cheapest shipping option is $10, so after taxes your grand total will probably be south of about $75. That might be a bit steep for what it contains, but the choice is yours.

Speaking of the 999 pre-order bonus, if I remember correctly those were delivered on time. Unfortunately, the same will not be said about the pre-order incentive for 999’s successor Zero Time Dilemma which launched late last month. Supply issues caused a mass shortage of boxed copies of the title just as it released, which could not have been good for customer satisfaction.

To make matters worse (better?), many people wouldn’t stop talking about how awesome the game is, which probably caused anxiety for some waiting to get their hands on the title. As of July 12th, two whole weeks after the game launched, standard edition copies were still trickling into homes. While we seem to be past the worst of the supply issues where the game itself is concerned, the story isn’t quite over for the watch bonus that early pre-orders earned you.

Currently it isn’t clear exactly when the coveted accessory – the “free” watch is flipping for roughly $100 on ebay – will arrive to buyers, but depending on where you pre-ordered from, you received something in compensation for the inconvenience: Amazon gave players $10 in store credit, I hear. It isn’t your watch, but it is something. I guess one could say, concerning the pre-order bonus, we’ve found ourselves in a bit of a Zero Time Dilemma Dilemma. No? That’s alright. 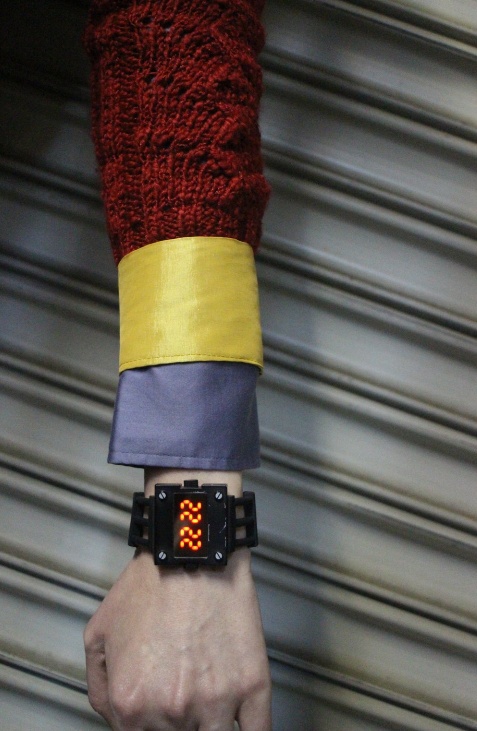 This is less true if you went to Anime Expo in LA a couple weeks back, as Aksys was there and they brought some of the watches. They were on sale for $49.99 without the game itself. I’m not nearly as cheap as some people I know and I thought that was too high an asking price without the game, especially when early birds are getting it literally for free.

Anyways, what did show up on time was the Star Ocean set for PS4. Even with its overall mixed reviews, there are no signs for a restock of the sold out set. Overall it includes lots of beautiful artwork – the outer box is also very cool: 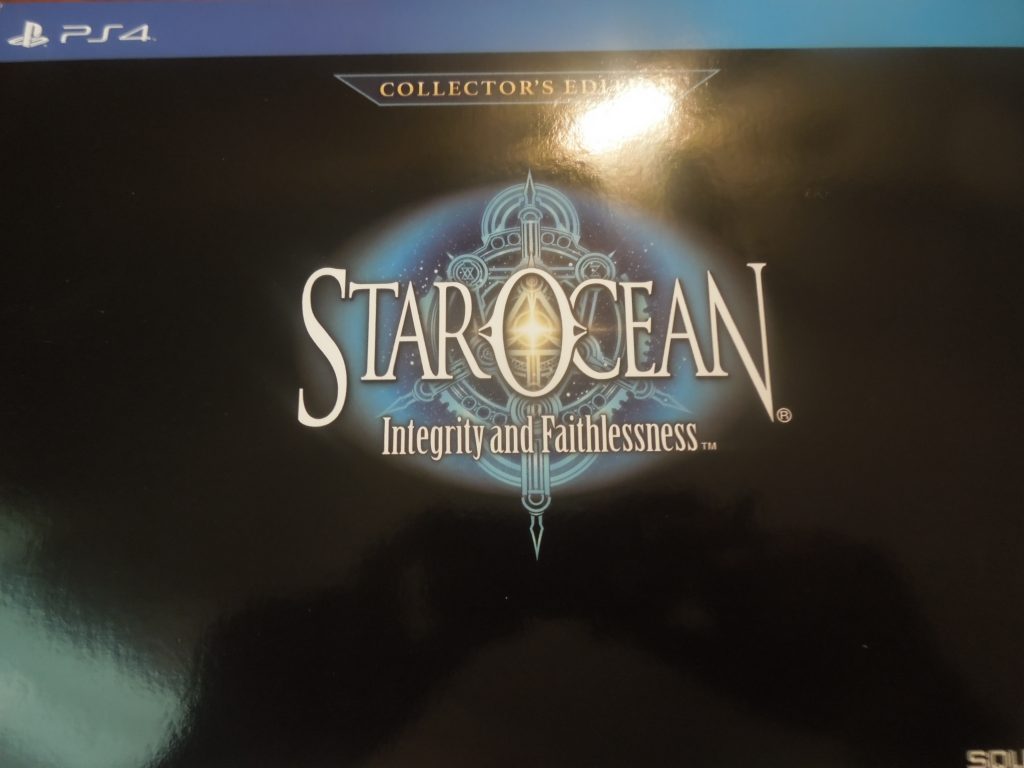 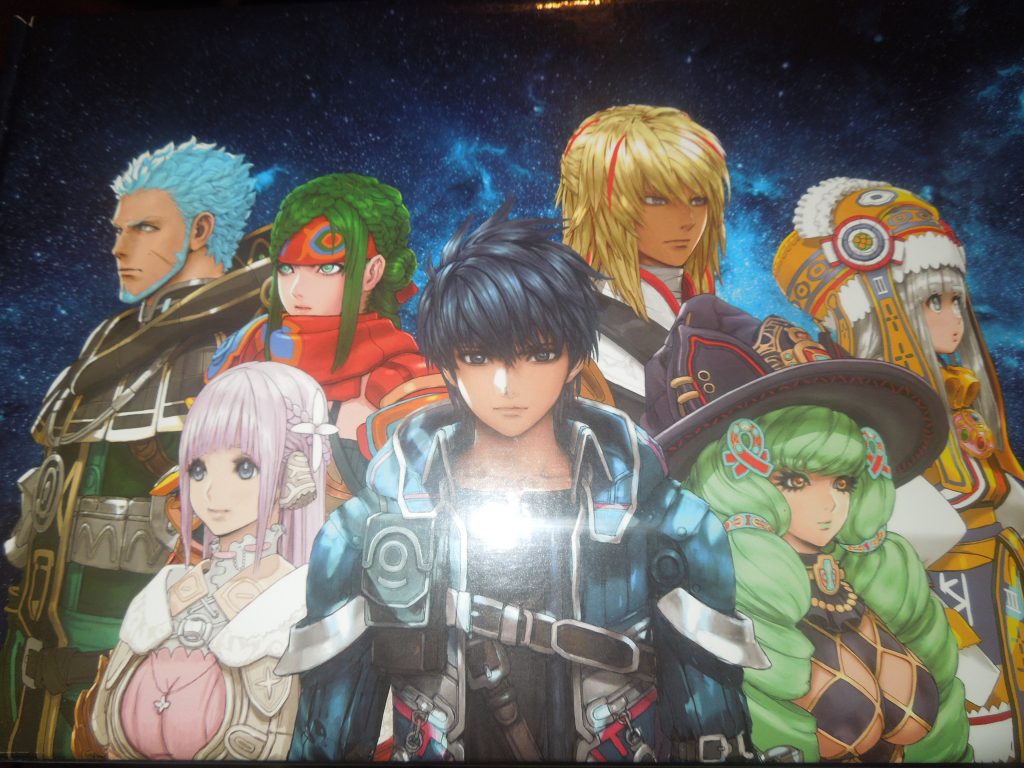 And the art book cover is gorgeous: 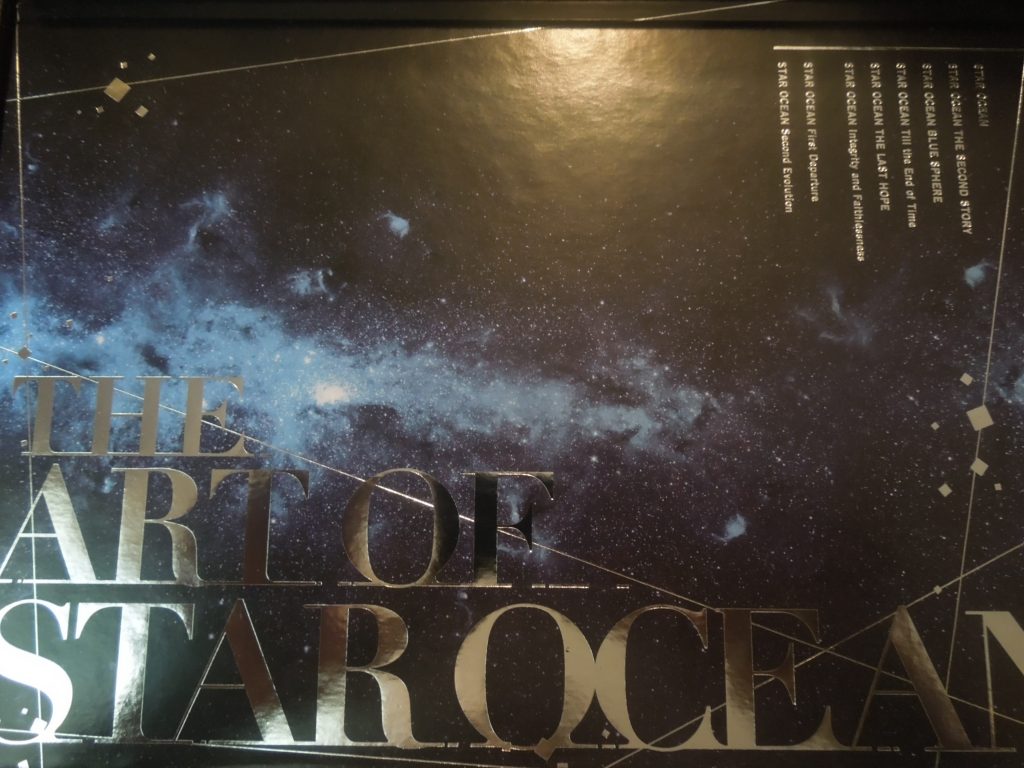 The contents, of course, are also gorgeous: 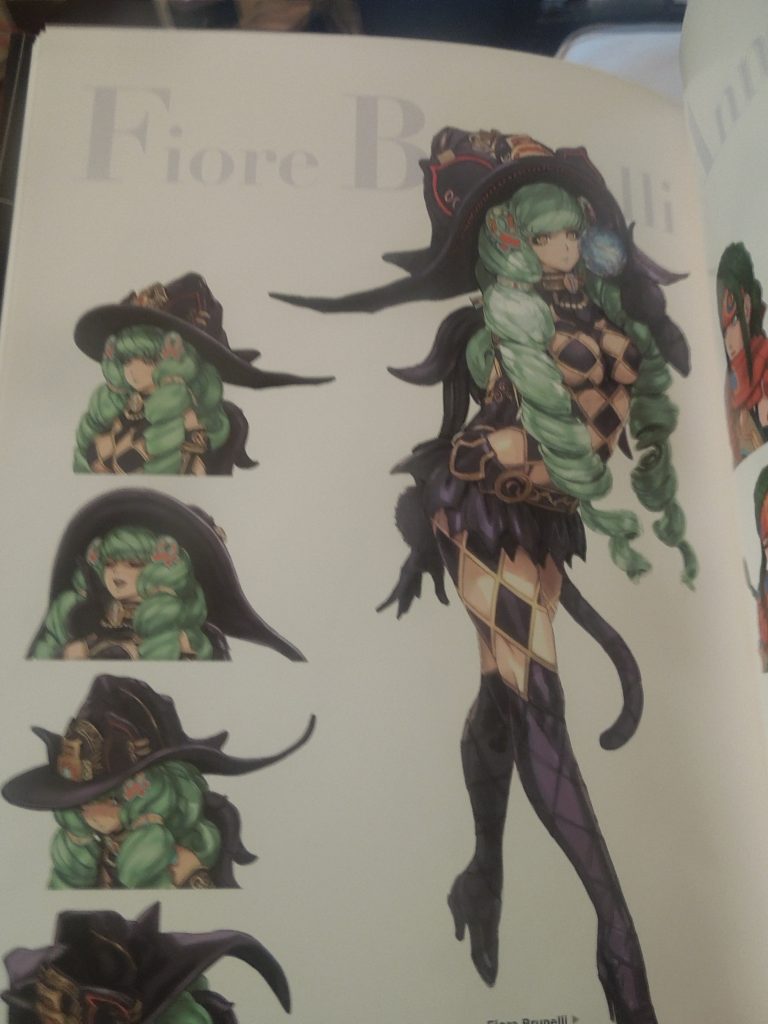 Surprising no one, the SteelBook also features some beautiful artwork inside and out: 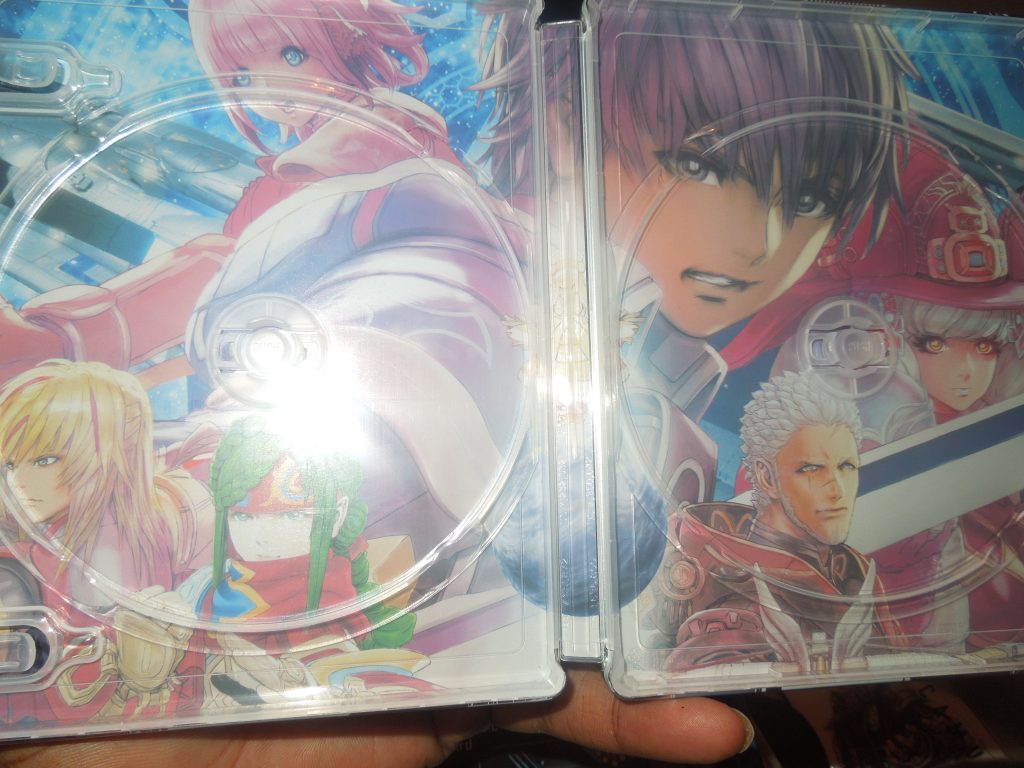 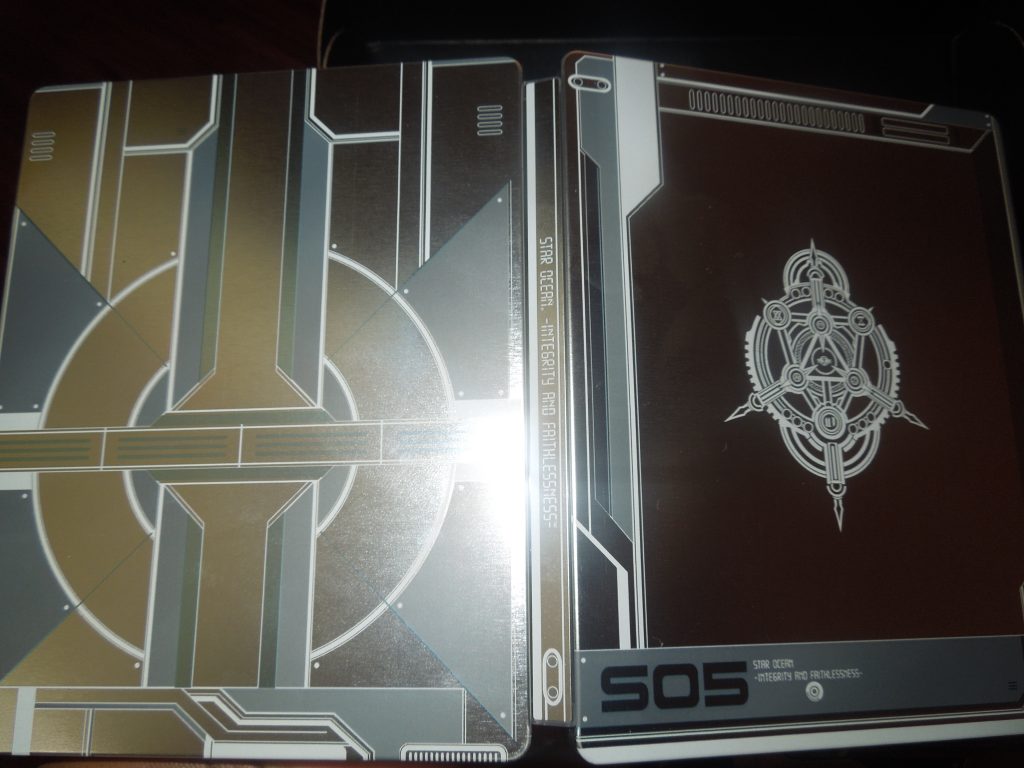 The glossy art cards round out the artsy feeling nicely: 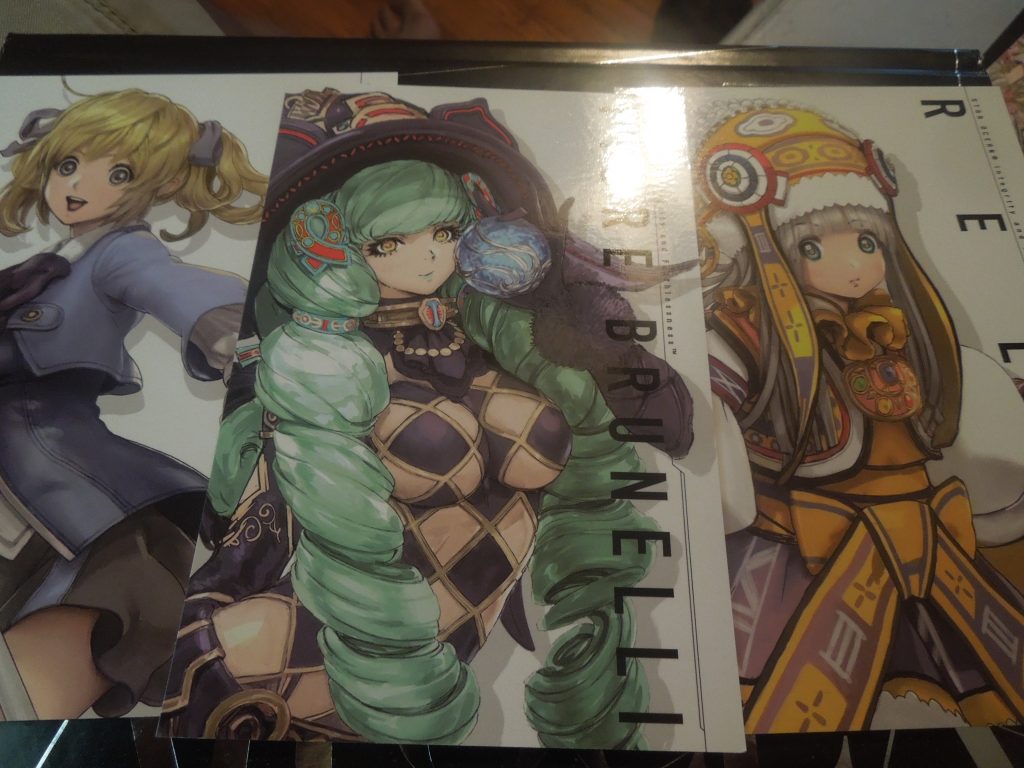 All in all, I’m pleased with the piece even if the game itself is queued behind a dozen others in the backlog – and also quite happy I don’t need to pay a $50+ markup for it.

It looks like various new releases are planned for next month, but there’s no way of telling what will be revealed until later today, or tomorrow, or next week. Isn’t it exciting? Are there any upcoming releases you’ll be picking up? Maybe you’ve pre-ordered the $130 Gears of War 4 set?