After The 3DS-focused conference held by Nintendo on September the 13th, the value of the stock of the Kyoto-based publisher has plummeted, despite the slew of titles announced during the conference itself. Something evidently didn’t satisfy shareholders, and they started selling.

There are many theories floating around on what that something is, but no one can read the mind of the thousands holding (and selling) Nintendo stock and the only fact that we know is that the value has dropped more than 1,000 points in four days, until the market closure on Friday. 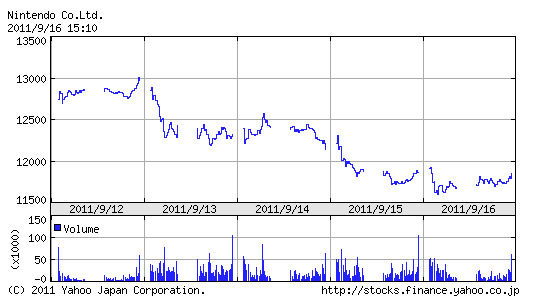 Friday wasn’t as bad as the previous days, and after a further drop that almost touched a new record low of 11,500, the value slowly recovered before the closing almost to where it was in the morning, losing only 20 points during the day, probably due to the beneficial effect of the first announcements at Tokyo Game Show.

Since then the Tokyo Stock Exchange has been closed. It’s normally closed on Saturday and Sunday, and today (actually yesterday in Japan) it’s Keiro no Hi (Respect for the Elderly Day), a national holiday that kept the exchange closed a day longer, creating a long week end that may have benefited Nintendo.

The Tokyo Stock Exchange will open again in a hour from now (at 9 AM Japan Time). By closure at 3 PM, we’ll know if Nintendo’s stock holders will be able to breathe more easily. Today, in fact, is the first day in which announcements came at the Tokyo Game show will fully influence the market, and the long weekend may have helped in calming the waters a instigate recovery.

Especially, Nintendo’s third party partners brought a lot of games to the show floor at TGS, including a new Dragon Quest Monsters, Monster Hunter 3G, SD Gundam Generation 3D, Bravely Default, Kingdom Hearts 3D, THEATRHYTHM Final Fantasy, and more. Many of those carry names that are normally heavy hitters in Japan and may instill some new found confidence in the brand.

On the other hand Nintendo’s main domestic competitor brought an extremely strong line-up and made a sneaky announcement about the remote-play capability of the PS Vita that can prove a solid competitor for the Wii U, risking to weaken confidence in Nintendo’s chances for the future.

Unfortunately, predictions are rather cheap, and it can really go both ways, as the tides of the stock exchange are tricky and there are no set rules. We’ll have to wait and see what happens in a few hours.