Wolfenstein II: The New Colossus Getting an Official Art Book via Dark Horse Wolfenstein II: The New Colossus Getting an Official Art Book via Dark Horse

Dark Horse and Bethesda have announced that they are teaming to bring gamers The Art of Wolfenstein II: The New Colossus this November.

Wolfenstein II: The New Colossus was perhaps one of the most impressive showings at E3 2017. Despite having its announcement lessened by a leak that happened right before Bethesda’s presser, MachineGames’ sequel to the 2014 Wolfenstein: The New Order still made quite the impact with a lengthy showing of both gameplay and cinematic pieces.

What was even better is that Bethesda revealed that the game was coming this year: on October 27th to PS4, Xbox One, and PC. And now today — in addition to the classic GI-Joe-themed Collector’s Edition — we know that an official art book via Dark Horse will accompany the game’s release.

According to Dark Horse the art book will feature the usual stuff: concept art, production material, and exclusive commentary from the creators of the newest entry in the iconic series that brings to life the game’s 1960’s Nazi occupied America across a 184-page hardcover.

The Art of Wolfenstein II: The New Colossus is set to go on sale not long after the game releases on November 7th for $39.99 USD. It will be available to preorder via Amazon or purchasable via your local comic shop (if you have one of those anymore).

Personally, I own a few Dark Horse products — including a few art books (Mass Effect for example) — and I can attest that they are of high-quality and worth the investment for a big fan of whatever the said series is.

Below, you can view the cover of the art book: 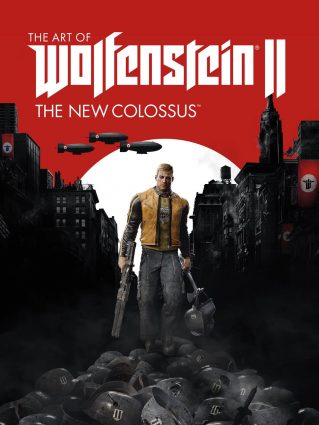 Dark Horse Comics has finally announced a date for the new God of War comic miniseries. God of War: Fallen God is an Upcoming Comic Book Series that Takes Place Before the Events of the Latest Game Bethesda and Dark Horse Announce “The Art of Prey”

Naughty Dog Teams Up With Dark Horse for “The Art of Naughty Dog”: Celebrating 30 Years of Games