A new Xbox E3 survey appears to suggest that Nintendo has a SNES Classic Edition announcement up its sleeve for E3.

As you may remember, earlier this year multiple reports surfaced that Nintendo indeed has an SNES Mini — following the mammoth success of the NES Mini — up its sleeve, and is currently preparing a launch for the holiday. But at the moment, these are just reports: as Nintendo has yet to say anything official.

However, Microsoft may have just done that for them, depending on how much you want to look into the aforementioned Xbox Live Rewards survey, which asks the question about the E3 announcement Xbox fans are most looking forward to. Alongside its own Project Scorpio, and the Nintendo Switch and PS4 Pro, is the listing of the SNES Mini. 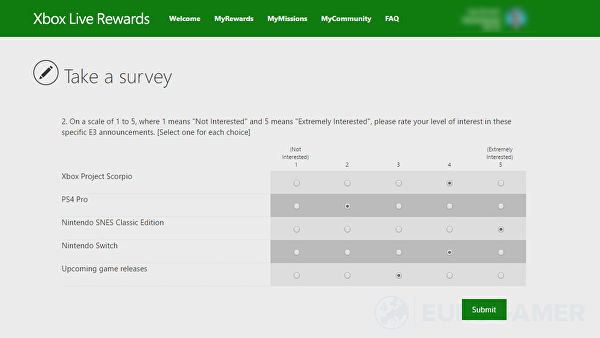 Now, whether Microsoft is just anticipating the announcement of the SNES Mini — like everyone else in the world — or if they know something we all don’t know (at least officially) remains to be seen.

All of that being said, what’s salient here is not what Xbox customers think of the Switch, but that Microsoft appears to know, or is at least confident, that the SNES Mini will be announced at E3. Only time will tell though.