During a Q&A Session held at the Season 1 finals of the Gears of War ESL league Gears of War 4 Lead Multiplayer Designer Ryan Cleven talked about the process behind the creation of the multiplayer maps for the game and showcased a couple of new slides to illustrate how things work.

Cleven explained that one of the first thing Studio Head Rod Fergusson made sure of was that the studio plays the game. The studio has an internal ladder and plays versus all the time. They also use heat maps that show where players go and move in classic maps, as you can see below. 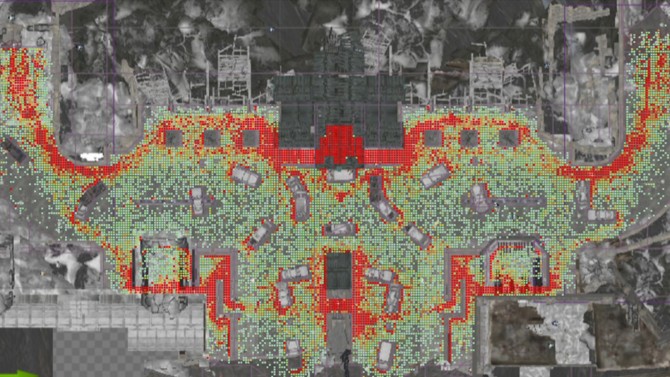 The team knew that most of them weren’t the ones who made the first Gears of War games, so they had to “do their homework,” studying “what made Gears Gears.” Then they made “a lot of maps,” folliwing the process below. 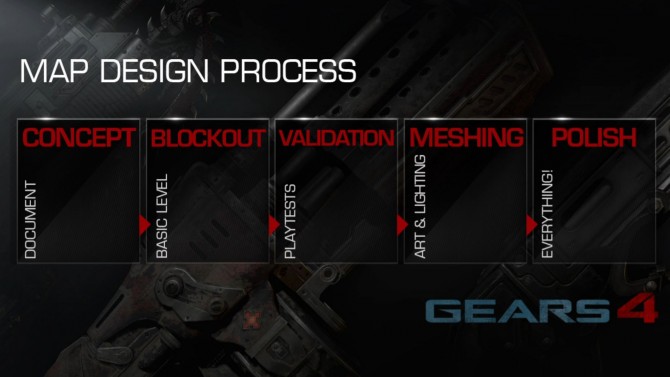 They start with a high level concept document, then they move to a “blockout” (the grey box 3D model of the level made with the most basic geometric elements). That’s never shown publicly, but it’s used to test the game “a lot.” They make about a hundred of those in order to narrow down what they want from the map.

Then, during the validation phase, the studio tests the map further, making sure that all the feedback on it is healthy, that everything looks good and everyone is having fun. Finally, the level is put through the art process so that it can be actually turned into something that can be shipped.

Cleven also explained that Gears of War: Judgement was a “great thing” for the studio to see, as without it, they might have gone the same way with Gears of War 4. There are things to learn from Judgement based on feedback from the community, giving the studio the benefit of learning from both what worked and what didn’t work, in order to shape what will come going forward.

Rod Fergusson himself mentioned that he enjoyed Judgement’s campaign, and it was one of the better looking games of the series, but after working on the ip for so long, it was an opportunity for the studio to experiment and to see what happened if they “shook the formula a little bit.” He repeated that there’s a lot to learn from that, in order to shape Gears of War 4.

This, according to Fergusson, is not to say that Gears 4 is going to be based on Judgement, but the pros and cons of it helped in forming what the studio can do with the upcoming Xbox One game.

Gears 5 will feature cosmetic microtransactions that its developers think are "very player-centric, player-friendly." DualShockers Weekly: Check Out The Most Popular News Stories Between January 10th and January 16th